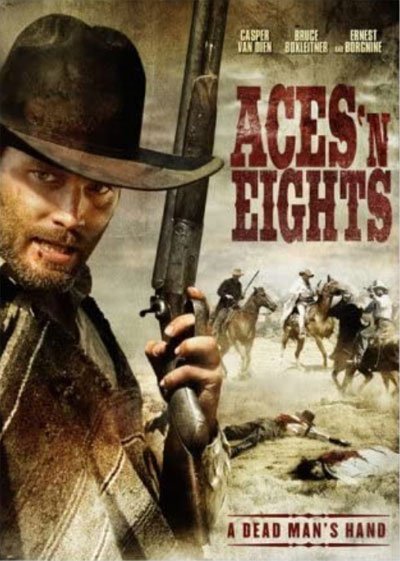 Aces ‘N’ Eights is about railroad and gunslinger converging in a west town where violence and corruption dominate without control.

A ruthless businessman hires a group of murderers to take over the land necessary for trains to pass.

But when the murders get too much, the Chicago company he works for sends a man to check the situation.

Meanwhile, criminals control the few families that still resist and do not want to sell their land.

The most stubborn is an old farmer firm in staying near the hill where he buried his wife.

But one of his cowboys is an old gunslinger who once worked with the men who are now threatening him.

The Chicago man investigates, searching for a peaceful solution for everyone, but the final conflict increasingly inevitable and close.

All gunslingers must choose whether to stay or flee and which side to take in the last deadly shooting.

Indeed, the owner trying to keep his land theme against the evil railroad is certainly not new.

For example, we can see the same story in Sergio Leone’s Once Upon a Time in the West, an unforgettable milestone of the western.

But even if history is already seen before, the most important thing is how you bring it on the screen.

In this case, the costumes, sets, and romance mixed with the old far West’s violence are more alive than ever.

All the characters are actually more complex than they seem, morally ambiguous with their moments of courage and cowardice.

Some also have a conscience and change faction passing from enemies to friends during this Railroad war.

To summarize, it may seem trivial initially, but examining it closely hides many intelligent moments and situations.

Craig R. Baxley’s career is one of my favorites, recalling the recent success of the famous John Wick saga directors.

Indeed this director, just like Chad Stahelski and David Leitch, started as a humble stuntman and action scene coordinator.

His work in movies such as Predator or The Warriors allowed him to create and direct his own movies.

Many of his works were for television channels, with few titles that the majors produced and distributed in cinemas.

Aces ‘N’ Eights is one of his many tv movies, in my opinion, perfectly like many westerns before and after those years.

Thanks to his talent, the action scenes are exciting and entertaining, exhibiting a scenic force of great visual and emotional impact.

The spirit of the west blows like a wind in the great American valleys, where the hard brown earth contrasts with the bright blue of the luminous skies.

A world where money, progress, and Railroad ride faster than an old gunslinger, now a species close to the final extinction.