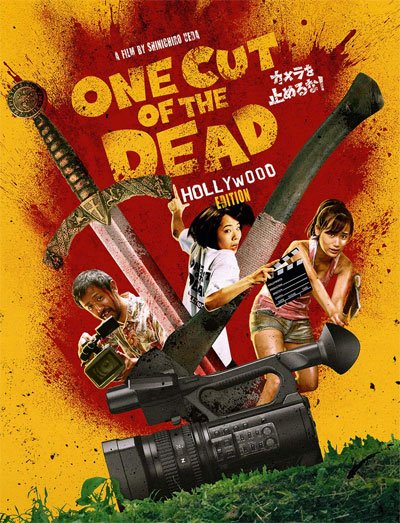 One Cut of the Dead is the story of a small director who finally has a career opportunity when a network hires him to run the first episode of a new zombie-themed television channel.

He is obviously enthusiastic and accepts without hesitation, but the producers entrust him with a complicated task.

His work will direct a tv live zombie short movie in a long single sequence shot without any cut.

He then began quick casting auditions with his wife and daughter’s help, calling some technicians of his trust.

Everything seems to be going well, and the location where they work appears very suitable to their zombie story.

But the decisive day, just at the beginning of the live broadcast, everything suddenly seems to fall apart.

Two of the protagonists have an accident and cannot participate, forcing him to act and direct.

Another of his actors is completely drunk and can’t even stand up.

The machine operator suffers from severe back pain and cannot work.

He also has to work with his wife, a good actress, but acting too immersive, becoming very dangerous for all of them.

To save the day, the unlucky director will have to improvise another script helped by his talented daughter in production.

Making movies is a passion… and a struggle!

One Cut of the Dead It’s a low-budget, fun, educational meta cinematic miracle for every aspiring filmmaker in the world.

Other directors already used the idea of a horror movie becoming a real horror, but not this way.

Indeed, transforming the making-off in a story is the stroke of genius that turns it into a small masterpiece.

Every aspiring director must face the daily lack of actors, technical means, and time to realize his ideas.

In this movie, we see a director facing a different drama every minute with stubbornness and intelligence.

His determination to continue is then further revived in the film he is making.

His character is actually a crazy director who keeps filming despite his actors and crew die one after the other.

Just as inspiring is his daughter’s character, a girl who knows the job and finally has her opportunity thanks to the constant misfortunes on set.

A hymn to the joy of making movies and never be discouraged in the face of adversity, but rather try to turn problems into new opportunities.

By exploiting our own inventiveness, perhaps each of us can achieve something better than what we originally wanted.

Shin’ichirō Ueda runs this zombie movie with little money and a lot of talent and ideas.

He is a young author still at the beginning of his career, and he deals with great mastery of directing, screenwriting, and editing.

One Cut of the Dead is exceptional in all those aspects, bringing something new and exciting to cinema’s art.

He also brings some light to Asian cinema, the everyday birthplace of talents, and great value titles of all genres.

The East is often unfairly out of Europe USA distribution, focusing on the well-known blockbusters.

Productions can not count on the best special effects, costumes, or actors but still tell small stories with an extraordinary imagination.

And believe me, there are plenty of these movies and directors out there trying to make their masterpiece like this one while running his zombie movie.

I always try to advise someone when I watch it, hoping to help even a single spectator know these unknown gems.

And I also ask you, very humbly, any movie to recommend me to help the little directors of this great art.