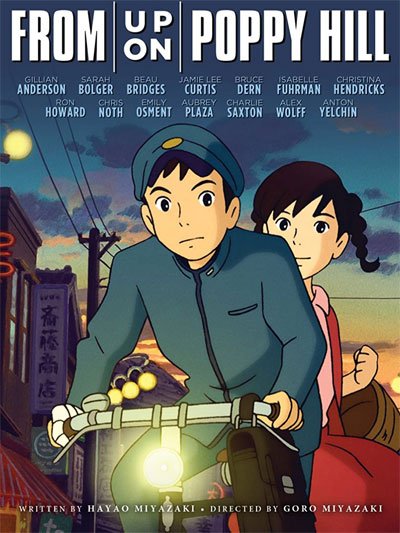 From Up on Poppy Hill is an animation movie directed by Hayao Miyazaki‘s son, Gorô.

A young girl lives on a hill full of poppies along with other women guests at her house.

The father was a sailor died during the war, and her mother works as a researcher in the United States.

Her life is happy and quiet, until one day, she meets a boy during a student demonstration.

The young people are protesting because the principal wants to tear down an old building, the so-called Quartier Latin, a historical meeting place of the various school clubs.

The girl first begins to help her new friend publish his newspaper, assisting him in the work after he has injured a hand.

Later she manages to involve her friends to clean up and restore the old building.

The students believe that they can change the idea of the principal, repairing it and wiping out the dirt accumulated over the years.

As the days go by, the feeling between the two guys becomes stronger and becomes something more than just friendship.

But after seeing an old photograph, he becomes convinced that both may have the same father and be brother and sister.

The sadness so oppresses the two, and the unhappiness of can’t loving each other, despite the mutual feeling, is evident.

As a final desperate attempt to save Quartier Latin, the students decide to invite the school president to convince him to cancel the demolition.

From Up on Poppy Hill is an animation movie by Gorô Miyazaki, continuing with pride his father’s Japanese animation legacy.

An inheritance that is not easy to accept because Hayao Miyazaki is one of those genes that very few are born every generation.

Nevertheless, Gorô takes the pacifist spirit of love and his father’s life, painting this story in the usual wonderful style of Studio Ghibli.

The narrative is always suspended between dream and poetry through the young and innocent eyes of the protagonists.

A boy and a girl who have their whole lives ahead of them and finally believe they’ve found love.

But the mocking fate may have shocking news for them, ruining it all before it even begins.

Just as beautiful and the atmosphere of playful and joyful freedom that we breathe in the school.

These students live and love art and science, learning and leave something for those who come after them.

Simple and natural all the moments spent in the two lovers’ families, simple and poor workers who live without presumption.

A portrait of the 1960 Japanese family practice, signed by an inspiring Miyazaki for those years.

How to be solid without being a genius

It is not by chance that this movie is about past preservation for the new generations and families of 1960.

In the old and decaying Quartier Latin, we actually review the director’s love for his father’s art and culture.

A tower of Babel that no one took care of, and the jurisdiction wants to destroy for progress.

But as the students say during their assemblies, progress does not mean forgetting the past.

In the same way, the past hinders the protagonists from being able to love, questioning them to be direct relatives.

But the love of this new youth is a strong feeling that can survive anything.

Like Studio Ghibli, fortunately, it seems to survive after the departure of the great Hayao Miyazaki.

Indeed, From Up on Poppy Hill has been a huge international hit, grossing over $60 million worldwide.

A simple story of friendship, family, practice, and love in which all of us can identify with a magnificent journey through 1960 when everything was simpler and truer.

The Silencing – A Lonely Father...