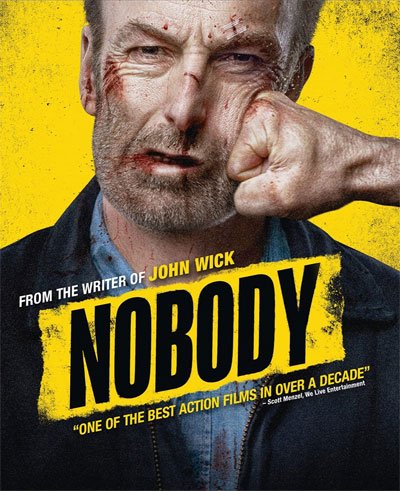 Nobody is a film about a taciturn man who works as a bookkeeper in his father-in-law’s company.

Every day repeats as the previous in a dull routine of boredom and apathy with his wife and children.

Until one night, two thieves break into his home to rob them of a few cash.

Unfortunately, the man does not react to the assault, and his son becomes angry with him, judging him as a coward unable to defend his family.

But when he finds out that the thieves stole a bracelet that his little girl cared about, he leaves for town to retrieve it.

In addition, a powerful, psychopathic Russian boss will be on his way to avenge his brother, who ends in hospital after a stupid bus fight.

From that moment on, the descent into madness and the most unbridled violence will bring back the past that man tried to forget.

In fact, just like his father, he was a hitman for government agencies who commissioned him to solve cases definitively.

But, instead, his home becomes a war zone, and he will have to fight mercilessly to protect his family.

Nobody is a fun entertainment film with surreal situations and exaggerated action scenes seasoned with humor and sympathy.

The protagonist starts quiet-looking old and nostalgic, and almost disappointed in his family and professional life.

But it doesn’t take long to returning be an unstoppable hitman who bangs any enemy with a smile on his face.

This continual joking about his own situation helps to believe in an otherwise far-fetched plot.

The best part of the movie is this seemingly cool and detached character but just as lethal and confident.

The supporting cast is also well featured, but he dominates every scene with his presence overshadowing everyone else.

The action scenes are choreographed to be humorous, but of course, they also have references to John Wick, having the same writer.

The final concludes the affair adequately but craftily leaves the opportunity for a future sequel.

A film that nobody expected

Ilya Naishuller returns after debuting with Hardcore Henry in 2015, another fun action all in subjective as a video game.

The director changes, making a more classic film with a protagonist who constantly repeats to everyone to be nobody.

Bob Odenkirk plays with sufficient conviction this peculiar character who initially is silently addicted to the repetitiveness of his life.

More dangerous his troubles become, and his spirit returns to being a man of action without fear and a lot of humor.

The same goes for his wife, the beautiful Connie Nielsen, knowing his secrets and the work he had before.

She also seems almost happy with the change, despite the risk his family is taking.

Legendary Christopher Lloyd, the lovable old mad scientist from Back to the Future, plays the protagonist’s father.

Equally nice and equally lethal, but only older living now quietly in a luxurious home Retirement.

He revives and returns to his youth, taking up arms again for his son’s sake.

As already said, Nobody could be the genesis of an amazing elderly hero of which we will see further adventures.

Finally, many of us can go back to the cinemas, where I recommend watching it enjoy an evening of action and fun without too much thought.

If maybe enough, we might get this old hitman bang again many more bad guys in the next few years.

Movies In The Space – Never...