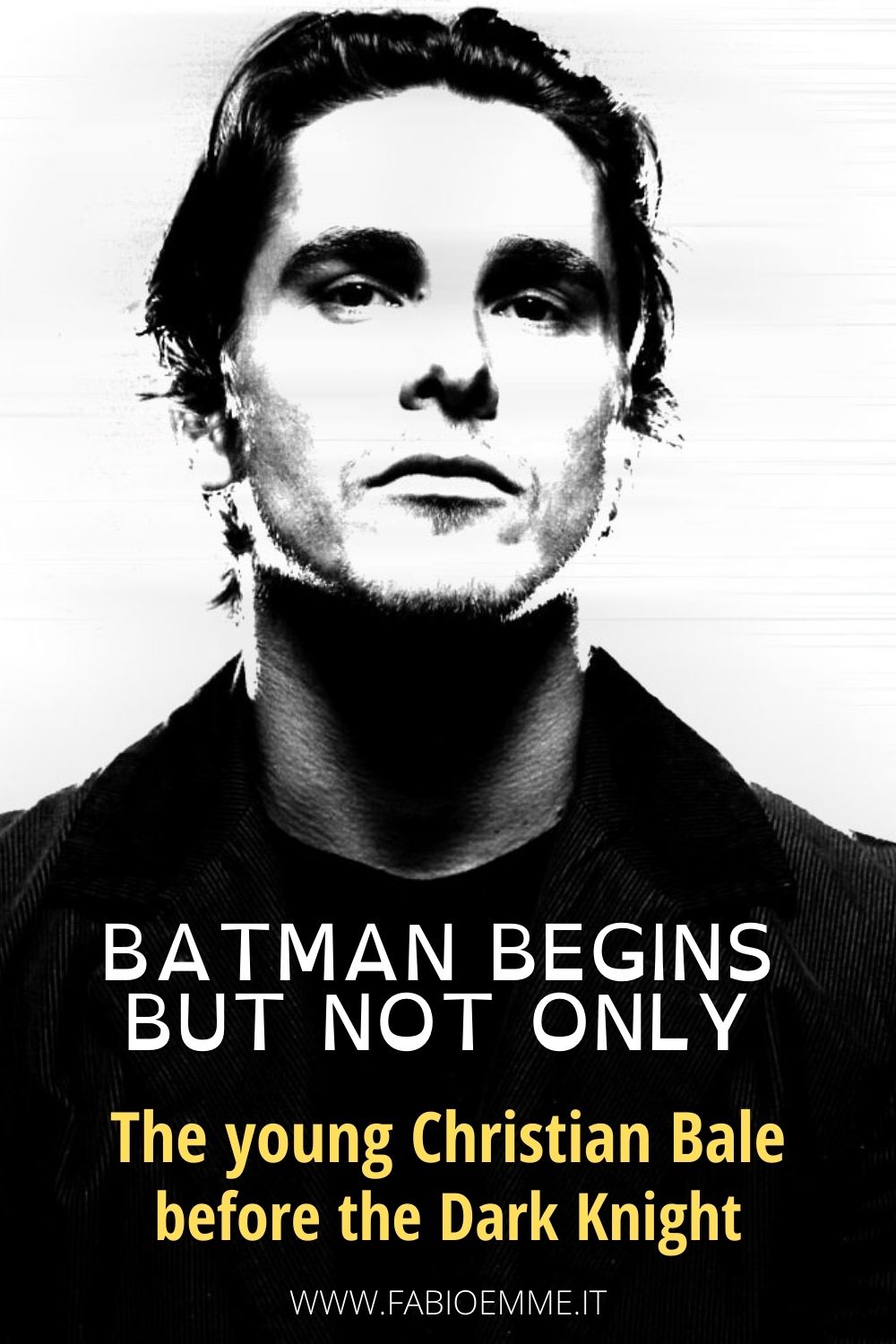 Christian Bale is the dark knight under the mask in our collective imagination since Batman Begins arrived in the cinemas.

Many other actors brought this mask, such as George Clooney and Val Kilmer, definitely the two most forgettable of all.

How not remember the great Michael Keaton in Tim Burton movies and the likable Adam West with his TV series?

Let’s face it: Batman Begins made Christian Bale an international star, although he has already made even better movies.

And we’re going to talk about some of these movies today to discover his deepest and most talented actor side.

As usual, we look between different genres to offer a chance to everyone to find one suitable for their tastes.

Let’s start with a nice dystopian action, where he already performs in good fights before becoming the famous Dark Knight.

Then go back in time to his young debut in another USA production with more epic and international inspiration.

Finally, we come to what I personally consider to be his best interpretation.

An Anglo/Spanish/French production where Bale is terrifying and fascinating simultaneously, and he’s almost physically unrecognizable.

After a devastating nuclear holocaust, what remains of humanity lives in some inflexible city-states.

The new authorities banish all emotion pointing to it as the cause of a past that brought humankind to ruin.

To maintain the population under control, they train a special warrior elite in the strict martial use of firearms.

With a scientific study of projectiles’ attack and response trajectories, they are absolutely invincible in firefights.

But one day, the best of these soldiers suddenly starts to feel emotions and have their own thoughts.

Trying in vain to repress it, soon he will no longer be able to hide the changing to his colleagues.

Entering war against the entire system, he must reach the heart of the monarchy to fight the established power.

The last knight in a dark and dystopian future

Equilibrium is one of the most interesting mixes of science fiction and entertainment action from the early 2000s.

Obviously, the Orwellian dystopia of total control over citizens is not a new fairy tale.

But, while proposing a concept already seen, it touches the philosophical and emotional strings at the right time and rhythm.

The shootings and the fight scenes alternate perfectly with the change and the inner struggle of the protagonist.

The simple idea of the samurai gunfighter is worth the whole action aspect of this film.

A challenge like the upcoming Batman Begins, where Christian Bale acts in an intense, wonderful way.

Perfect transformation of the actor from stone warrior to revolutionary in the love of the beautiful Emily Watson.

Fun sci-fi action set in a dystopian future directed by Kurt Wimmer really in his best movie ever.

Two guns are better than one

Kurt Wimmer finds here the only true success of his career after his debut with the forgettable One Tough Bastard.

He will try again in his next and last work, Ultraviolet, this proportionate formula between entertainment and social sci-fi.

A miserably failed attempt despite having the beautiful, fierce, and athletic Milla Jovovich as the protagonist.

Unfortunately, the Resident Evil and The Fifth Element action star is not enough to save a messy and confusing story.

In this case, he perfectly built the movie on a solid script, a good cast, and a good direction.

The sequences pay homage to Eastern directors like John Woo and Dante Lam, preparing him for his Dark Knight future fights.

We all can’t wait for the protagonist to draw his ejection guns from the sleeves and begin his bombastic shootings.

A vigorous and elegant warrior as a dancer ruthlessly reaping everyone comes in front of him.

Yet, Equilibrium went almost unnoticed in cinemas all over the world, being then revalued with time.

Many fans, including myself, consider it today a peculiar hybrid of entertainment and philosophy of excellent level.

A boy grows up isolated in the luxury of his immense villa in Shanghai during the 1930s.

But, unfortunately, the Japanese invasion deeply disturbs the peace of his carefree childhood.

Although initially concerned with neighborhoods away from their home, his family prepares to escape.

But just as they are crossing the city trying to return to England, the child remains separated from his parents.

Lost and alone, he joins a group of petty thieves who raid the evacuated houses of the war-torn city.

The Japanese army, sweeping the city relentlessly, captures them all and interning them in a prison camp.

Their living conditions are harsh, but they organize a small round of exchanges in one barracks.

As the American front advances to drop the nukes, the boy prepares to escape before it is too late.

Love and war from the eyes of a child

Empire of the Sun is a film about the atrocity of war seen through the eyes of a child.

Lost his family, the innocent wandering disoriented in a city under siege and ruins neighborhood after district.

In a few minutes, life changes forever, learning what it means to find food and a safe shelter every day.

The gang who finds him initially even tries to sell it but then welcomes him for his initiative and intelligence.

Later, in the concentration camp, he becomes a little knight of life against the dark halo of death surrounding them.

Keep looking for a play, smile, and searching affection despite the extreme imprisonment conditions.

In a word, he reminds everyone of the world outside of that hell.

The story is told hard and realistic, avoiding the search for easy tears even in the most dramatic scenes.

One of the most honest and touching formations and growth stories, featuring a small and promising actor in the foreground.

The debut of a baby star among the streets of Shanghai

Christian Bale perfectly plays a weak and insecure character, far from the unbeatable power of his future Batman Begins.

The great blockbuster maker exalts his talent wisely, alternating his moments as a protagonist and supporting actor.

In a way, the rest of the cast does the same work, starting with the great John Malkovich.

Playing the leader of this gang of petty criminals, the man actually becomes a putative father to the young drifter.

These thieves, pickpockets, and looters for necessity are still better than the soldiers who did evil for pleasure and duty.

The concentration camp barbed wire is pure evil, enclosing the worst that the sad human sample can offer to this world.

A theme that Spielberg will expand and develop even further in its acclaimed and award-winning Schindler’s List.

Now we come to my favorite movie with Christian Bale, where the actor looms even more than Batman Begins.

A seemingly harmless and quiet worker slowly plunges into a self-destructive spiral.

For over a year, in fact, man can no longer eat or sleep.

During his long sleepless nights, he cleans the apartment or goes to the airport talking to a nice waitress.

At work, losing the friendship and respect of his colleagues, who consider him completely lost.

When a terrible accident happens in the factory, everyone points the finger at him, accusing him of being guilty.

At that point, he completely isolates himself from everyone, becoming friends with a strange colleague crippled by one hand.

But strange events in his home and life begin to make him believe that maybe it’s true that he’s going crazy.

Every day he finds strange notes with cryptic messages, living in a state of constant apprehension.

But in reality, those tickets conceal a truth that he absolutely does not want to remember.

The drama of memory and guilt

The Machinist is an evocative and exciting mystery thriller with the right dark and slow rhythm of a nightmare without exit.

Before the dramatic ending, the protagonist is absolutely unable to understand what is happening.

This helps us, viewers, empathize, as we know even less about him.

An experience that leaves us lost, navigating adrift, and without a compass in the wounded psyche of this simple worker.

Many of these scenes of psychological introspection take place somewhere between light and darkness.

A reference that is clear to the drama and inner conflict of the protagonist, separated from reality and his own memory.

But even in his world plagued by trauma scars, there is room for love and friendship and, therefore, hope.

A dark knight of many forms and faces

Christian Bale transforms into an impressive way to become this character.

In addition, we have Brad Anderson directing at the very best of his career.

Later, unfortunately, the director will lose the right way in other films, always enjoyable but more banal and dull as The Call or Fractured.

But at that moment, he was still in the mood like his previous Session 9, another fantastic psychological thriller with rarefied rhythms and excellent writing.

Returning to Christian Bale, equally impressive will then be his new mutation of all physical and muscles for the next Batman Begins.

The film will be the first of a successful trilogy on the Dark Knight directed by Christopher Nolan, cult director for the new generations of cinephiles.

But even with the love and fun for the Gotham City bat, the intensity and catharsis he had in these three films remain unsurpassed to this day.