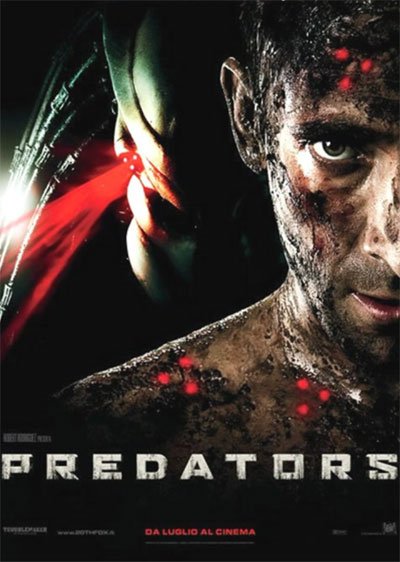 The aliens kidnap a group of soldiers to use them as training meat to perfect their killing skill.

The unfortunate selected people awaken with no memory, rushing from the sky into a forest.

Once they get together, they’re struggling to figure out what’s going on.

These are men and women from all the armies of the world who do not know each other.

The only thing they have in common is being death machines born to kill mercilessly.

Each of them has special weapons for the battle since the aliens want a fair fight.

But despite this, the soldiers are at a disadvantage since the predators are physically much stronger.

In addition, they have technologically advanced equipment with laser weapons and invisible camouflage.

Moving through that mysterious and deadly jungle, humans are desperate for a way out.

Their only hope is a traitorous alien and an old soldier who went mad after surviving years of hunting.

In this hunting game the prey is human

Predators is one of the most entertaining chapters in the saga of the deadly alien hunter with dreadlocks.

This movie continuously pays homage to the original movie from the 80s by the director John McTiernan.

For one thing, the wonderful music of Alan Silvestri still perfects to create a spectacular survival atmosphere.

Then la location is very similar to the original tropical jungle, a deadly green trap with no way out.

Finally, many scenes are similar, conceptually enhancing the nostalgic effect.

For example, the group jump from the waterfall or the duel with a machete, replaced here by a Japanese katana.

But this movie doesn’t just live by copying.

It also has some good new ideas that I prefer not to spoil and ruin your enjoyment.

To summarize, the human hunting atmosphere still works, and the aliens are more cruel and powerful than ever.

An international cast of soldiers into the battlefield training against aliens

The director Nimród Antal It rises to a higher budget than its previous Armored, its first Hollywood production.

We already talked about his original heist movie in this article, and we strongly advise you to watch it.

Although he begins with the small independent movie Kontroll, he has no problem handling big actors.

The warrior’s assortment is well mixed, including Adrien Brody as the leader and the beautiful sniper Alice Braga.

In addition, all the characters are perfect, giving an international mood to this production.

For example, there is the famous and nice Walton Goggins, famous for the TV series The Shield.

The actor is a creepy but tenacious prisoner, unpleasant to all but who will stand up in battle.

Not to mention Danny Trejo, the protagonist of Machete by Robert Rodriguez, and also a producer of this movie.

An excellent result that then led to another sequel box-office champion, The predator, by Shane Black.

All in all, one is a dignified sci-fi action proudly carrying on Predator’s franchise, after the two awful chapters of Alien Vs Predator.