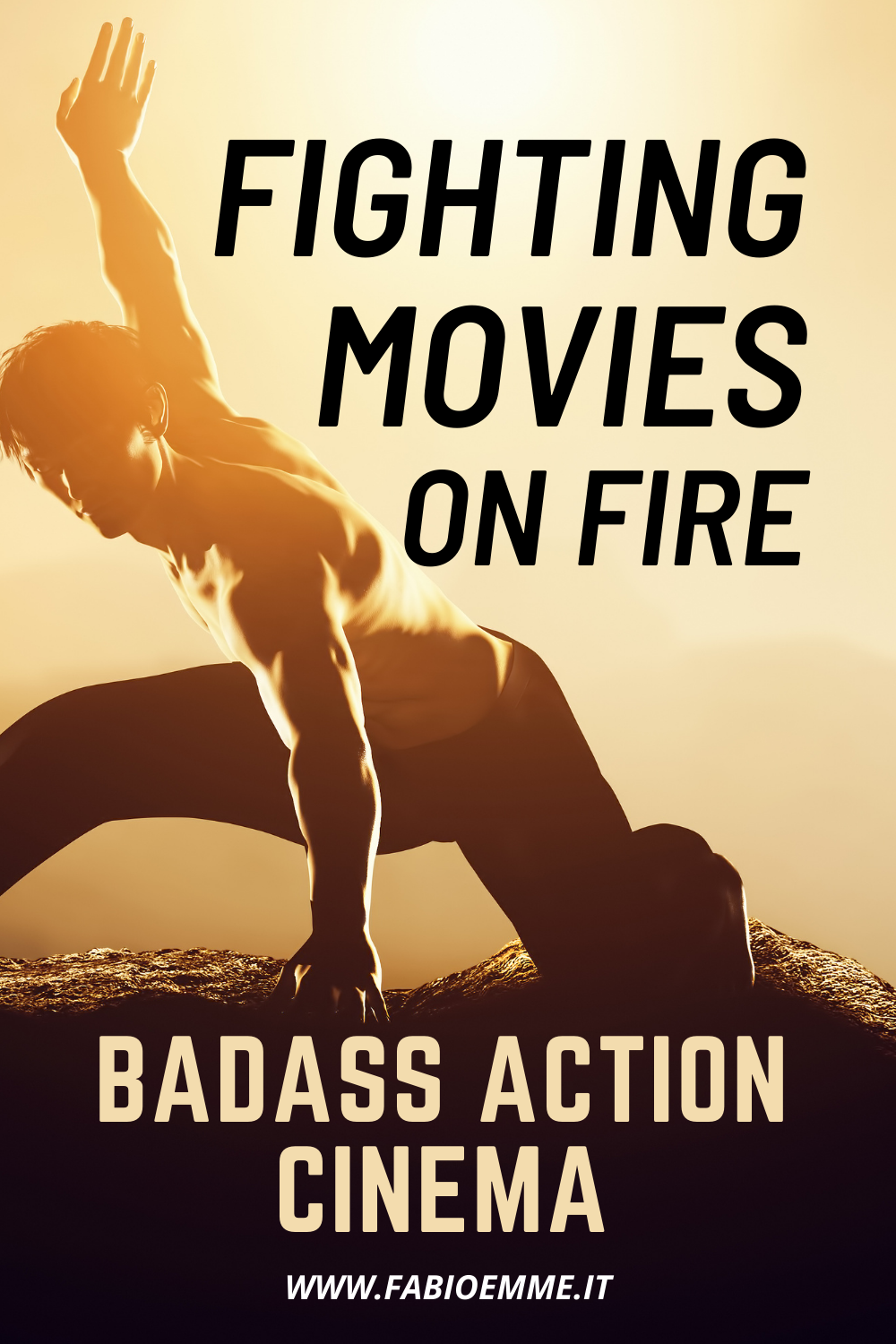 Fighting Movies doesn’t necessarily mean an underground dog fight without rules; on the contrary, it can be really badass action cinema.

In the right hands, this genre can bring out the best of histrionics and the creative verve of the directors.

And since the action is the most abused genre ever, let me help you choose these films with care.

So we start from the 90s and no less than from the heart of Hong Kong’s action cinema.

Staying in the East, we then move to Indonesia, observing closely one of the badass cinema creators of this genre.

Finally, we arrive at Hollywood, the homeland of so much garbage and, sometimes, good movies like the recent John Wick.

And one of the two directors of the famous action saga is the author of the latest fighting movie.

So sit back and cover your eyes for flying teeth and blood spatter. The beating is about to begin.

The young Hung returns to his native country, where his father runs a famous martial arts school.

Exiled years ago for his intemperances, he redeemed himself by learning the Drunken Style from an old master.

A multiform style makes him an invincible warrior, but only when he’s under the influence of alcohol.

Hung would only like to live peacefully with his father and the shrewd stepmother, having abandoned battle times.

But a British businessman and his rabble of henchmen constantly mistreat and humiliate his fellow citizens.

In addition, behind the affairs of a common steelworks hides traffic of historical artifacts of Ancient China.

Barricaded in the British Embassy, the criminals smuggle the precious artifacts and then ship them to the British Museum.

Along with a small handful of brave men, Hung will fight to defend the honor and memory of his nation.

Badass Cinema at the opera house

Initially trying to be one of the many emulators of Bruce Lee, he then wisely decides to change completely.

He thus transforms his style by imposing few but fundamental specific rules of combat.

Despite the abundance of fighting scenes in his films, these are never devoted to violence or wickedness.

Instead, in the foreground, the actor draws heavily from his youthful experience at Pechino Chinese opera.

His choreographies thus become ballets where he combines grace and speed in movements with hilarious childish irony.

Fist of Fury… and laughter

Besides the badass fighting scene of the movie, it is also great comedy cinema.

Simply fantastic the various gags in the city where the protagonist is challenged continuously and his precarious family situation.

On the one hand, the boy still seeks his father’s respect, the stern, and serious Ti Lung.

But, on the other, it must also cover the stepmother’s craziness, an irrepressible and shrewd Anita Mui.

The poor guy then jumps from one situation to another, also joining the mission of officer Lau Kar Leung.

Initially resenting each other, they engage in amusing duels to determine which of the two is a better master.

But eventually, they will make common cause in the war against the British, defending the citizens from abuse and humiliation.

A war without rules culminating with one of the best badass cult fighting movie scenes in cinema history.

The battle against Ken Lo in the heart of the steel mill is still impressive so many years later.

The legend of Drunken Master debunked Eastern cinema and then arrived in the West a few years later.

The profit was low, but it immediately became a legend acclaimed as one of the best Kung Fu movies ever.

A select squad of Indonesian police goes on a mission in the heart of the infamous neighborhoods of Jakarta.

Their goal is simple: eliminate by any means the craziest and most dangerous boss in the whole city.

He lives like a king at the top of an apartment building, ruling it as an unchallenged lord and master.

Every floor of the building is filled with insane criminals ready to fight to the death to protect it.

Unfortunately, the mission goes immediately in the wrong direction, and most of the team ends up massacred.

In addition, their commander confesses that the operation was his idea and had never been officially approved.

So no one knows where they are, and there will be no outside reinforcements to help them.

Unable to go back, the few survivors decide to continue trying to get to the boss.

But on their way, dozens of vicious criminals will try to kill them without respite.

Plenty of punches, kicks and bullets

The Raid is one of the best third-millennium fighting movies for an hour and a half of no-holds-barred frantic combat.

The shootings and fight sequences are shot with incredible style, passion, and strength.

The violence is full of originality in the choice of badass cinema shots and machine movements.

The scenes are a long sequence plan choreographed with great mastery by a troupe of competent and close-knit stuntmen.

Alternated with a frenetic but not incomprehensible montage, the rhythm is intelligent and never unnecessarily exasperates the viewer.

The movie is not limited to the action genre but is also an excellent detective noir story.

Caught in the vortex of the struggle for mere survival, it becomes impossible to distinguish the good from the bad.

Each character has his own shadow side and an unmentionable secret that he keeps hidden from others.

Therefore, right or wrong becomes irrelevant and counts only those who beat harder and has no mercy for their enemies.

Gareth Evans is a director proudly establishing as one of the best fighting movies maker of the last 20 years.

Despite a short filmography, the Welsh transplanted to Indonesia quickly spread above his colleagues by his inimitable style.

The protagonist is the trusted Iko Uwais, a Silat expert, a fighting style inspired by the rules of nature.

The actor certainly does not have the Marlon Brando acting skills, but he is a tireless war machine.

His character repudiates the use of weapons, preferring to kill his enemies with his bare hands brutally.

The final clash between this badass and the two anti-hero brothers can be framed as a piece of cinema art.

An incredible moment in the history of martial arts cinema, tense and violent from the first to the last punch.

The film grossed discretely at box offices around the world, especially considering its minimal budget.

However, success led to a sequel a few years later, even more frenetic and paced The Raid 2.

At the end of the Cold War, a charming British Secret Service agent goes on a mission to Berlin.

Officially his task is to take the body of a colleague killed in action by an enemy spy.

Upon arriving in the city, immediately a young and devious undercover agent follows every move she makes.

But in reality, her superiors have entrusted her with an extremely delicate task for the nation’s political balance.

The real task is to retrieve a list containing all the wall western secret agents’ detail.

This secret document unleashes a ruthless scavenger hunt among the worst cutthroats and jackals in the city.

The woman’s life immediately becomes hard, avoiding the blows and betrayals that arrive without warning on all sides.

An unregulated fight between the heavyweights of government agencies worldwide, willing to do anything to get the list.

The beautiful blonde will fight in the background of a city in revolt, already on the verge to definitively explode.

The coldest days of the Cold War

Atomic blonde is a refined and spectacular spy movie with lots of class and subtle fighting and action shots.

A massacre set in the days between the collapse of the Berlin Wall and the final death of the 80s.

The spirit, fashion, and music of that badass era are an integral part of the cinema’s charm.

Impossible not to feel a thrill of nostalgia for that era of cultural and economic changes.

The end of the Cold War marked the final opening of the Soviet bloc to Western capitalism.

Therefore, it is the end of the communist model that had resisted alternate luck for over 60 years.

David Leitch pays homage to those years with passion and makes his solo debut as director.

After the famous John Wick, the absolute success he filmed with Chad Stahelski, which then continues the saga of the famous killer alone.

Grossing over $100 million worldwide, the director then arrives in Hollywood to direct the funny Deadpool 2.

A bright destiny for them, both former stuntmen who bring their films all their experience and cinematic wisdom.

The fatal beauty of a great action actress

Charlize Theron dominates the movie with charm and charisma, managing excellently even in the numerous fighting scenes.

Another cinema role as a strong woman after having already been the badass protagonist in Mad Max: Fury Road.

The former South African model is one of the toughest women, dispensing punch and kick throughout the movie.

At his side, there is the ambiguous James Mcavoy, an English officer with absolutely no respect to the rules.

A dirty traitor faking affable manners, he will be both the best friend and the worst enemy of the protagonist.

Among them is then the sexy spy of the French government Sofia Boutella. She’s a beginner with whom the blonde has a short hot and elegant love story.

All these characters and others orbit around the protagonist as dangerous satellites ready to impact at any time.

The narrative tension and atmosphere of the old spy movies like 007 perfectly combine with the fighting action moments.

But Atomic Blonde is original in its absolute aesthetic perfection, carving out an unexplored space completely her own.