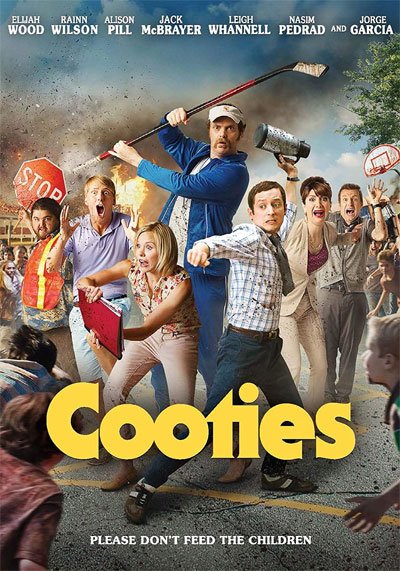 Cooties is a funny and clever baby zombies movie full of gore and demented humor.

A young teacher arrives in the small town of Fort Chicken to replace a colleague as a substitute teacher.

The students do not welcome him well, insulting and mocking him for his desire to write a horror novel.

He also found an old female friend he hadn’t seen in years and had romantic feelings for.

Unfortunately, among them is her boyfriend, the rude and aggressive gymnastics teacher of the school.

But soon, all this doesn’t matter, and all of them are at the starting point of a zombie apocalypse.

In fact, because of an infected chicken nugget, all the school children become terrifying bloodthirsty creatures.

To survive, the group of surviving teachers barricades themselves inside the school, trying to resist.

When they realize that no help will come from the outside, they finally prepare to fight the baby zombies’ horde.

A laughing apocalypse to die for

The couple did a great job of great entertainment, improving a few years later with the excellent Bushwick action movie.

Their film technique is simple and effective, turning the colorful and playful world of children into a nightmare without exit.

Exalting the absurdity of the situation, they always emphasize with a smile even the most violent moments.

The pace of the story is fast and immediately enters the heart of the action.

After a brief introduction of the location and the various characters, indeed, there’s no need to over-explain.

Children almost look like monsters even before they become zombies, arrogant and cruel despite their youth.

A generation without expectations where even adults are too busy with their little problems to help the youngest.

Later, adults discover after the zombie virus affects only children not yet in puberty.

For this reason, the two generations are definitively divided into a ruthless war without prisoners.

A war later expanded to the whole world and not only to the school enclosure, becoming a real apocalypse.

Idiots but honest and brave characters

The funny Elijah Wood is the dizzy main character of this baby zombies movie.

Simple and gentle, he also becomes stupid and boring, obsessively talking to everyone about the novel he wants to write.

A chronic wuss will become a hero with no choice on his first and final day at school.

As his friend/rival, there is a phenomenal Rainn Wilson, the tough but equally idiotic gym teacher.

Initially indifferent, he quickly becomes jealous when he sees the understanding and looks between him and his girlfriend Alison Pill.

The actress plays ambassador between the two boys, often forcing them to collaborate instead of arguing unnecessarily for their idiocy.

Finally, for all lovers of the old TV show Lost, the famous Jorge Garcia is also present. The chubby, funny actor plays a janitor who likes to do drugs in his van.

Under the influence of hallucinogenic mushrooms, he will be the only one to worry at the arrival of the police.

Sadly Cooties was a commercial failure at the box office, and that very few know it even today.

So let’s play it on our screens, recommending it later to all our friends for a cheerful and bloody evening.

Bridesmaids – Jubilant about marriage but...