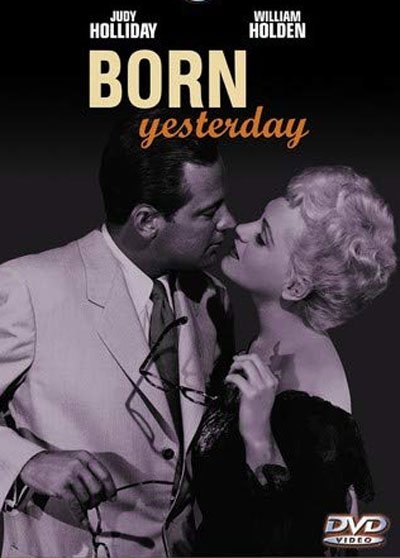 Born Yesterday is a cult movie of the ’50s and one of the best rom-com ever of cinema.

It’s the story of an arrogant businessman coming to Washington because of passing a fundamental law for his factories.

He rents an entire floor of a luxurious hotel during his stay to carry out his work with discretion.

Along with him are his loyal men, lawyers, and his young and beautiful mistress.

The girl is fundamentally good and kind but seeming ignorant and vulgar when confronted with the local aristocracy.

The businessman decides to hire a troublesome journalist to instruct and refine her behavior.

Unfortunately for him, the girl will wake up too much, finding new interest in reading, culture, and art.

Possessing half the estate as a silent associate, she will become a sudden danger to defuse at any cost.

The journalist is enormously amazed at her change, coming to fall in love with her.

His love awakes her desire to be free and independent for the first time in her life.

Therefore she decide to face her bossy partner, demonstrating an intelligence that no one expected.

Finally, both will try to prevent the corruption of politicians for the businessman’s millionaire projects.

When time crystallizes a masterpiece forever

Born Yesterday is a movie that will never grow old with a theatrical structure effective yesterday as today.

A story for everyone, young and old, dealing with universal themes such as love, culture, and respect for oneself.

All this and even more happens during this amazing cult.

The metamorphosis of the young ex-stripper who becomes a refined and intelligent woman it’s fascinating one minute after another.

In addition, even the comedy side of the movie is still pretty damn funny to this day.

Despite the huge cultural gap since the 1950s, even today youngest will appreciate a Roma-com like this.

The humor and ease of his jokes travel through time without losing their power.

Who among us has never dealt with an arrogant and unpunished boss or superior?

The characters’ humanity impresses with their carefree and passion.

In a story with the classic fight of good against evil, they shine with the light of justice and purity.

Ultimately, for once, we love to see evil and corruption being defeated and ridiculed, at least in a movie.

The cultural testament of a great director

George Cukor is one of the most famous and prolific names in the Hollywood industry.

The director has made over 60 movies between the 1930s and 1980s, many of which remained indelible in film history.

Personally, Born Yesterday is what I prefer most. It is practically a perfect and unassailable movie.

A fairy tale with a happy ending that is effective with simplicity, naturalness, and lots of joy and happiness.

Broderick Crawford is a titanic and irresistible protagonist.

He’s a villain we all love to hate. In the role of the evil and ignorant master accustomed to domination, he rules everyone else life.

Hasty and rude to anyone, he always covers his wickedness with cash.

But he will learn being powerful doesn’t mean being invincible.

Underestimating his partner Judy Holiday, he will make the biggest mistake of his life.

The wonderful actress plays here the best and most important role of her career.

Sexy and uninhibited, she is also funny as the naive girl who finally becomes aware of her brain.

Instead, William Holden is the good angel who whispers on his shoulder, awakening his conscience and intelligence.

In the role of a nosy journalist, the actor becomes the gentle nemesis of the shrewd and bad rich man.

A funny villain who believes he can buy everything and no one ever has the courage to face him.

But in the long run it will be feelings and ideals that prevail over money and career for once.

In conclusion, a simple and affordable film thanks to the brilliant direction and brilliant interpretation of its cast.