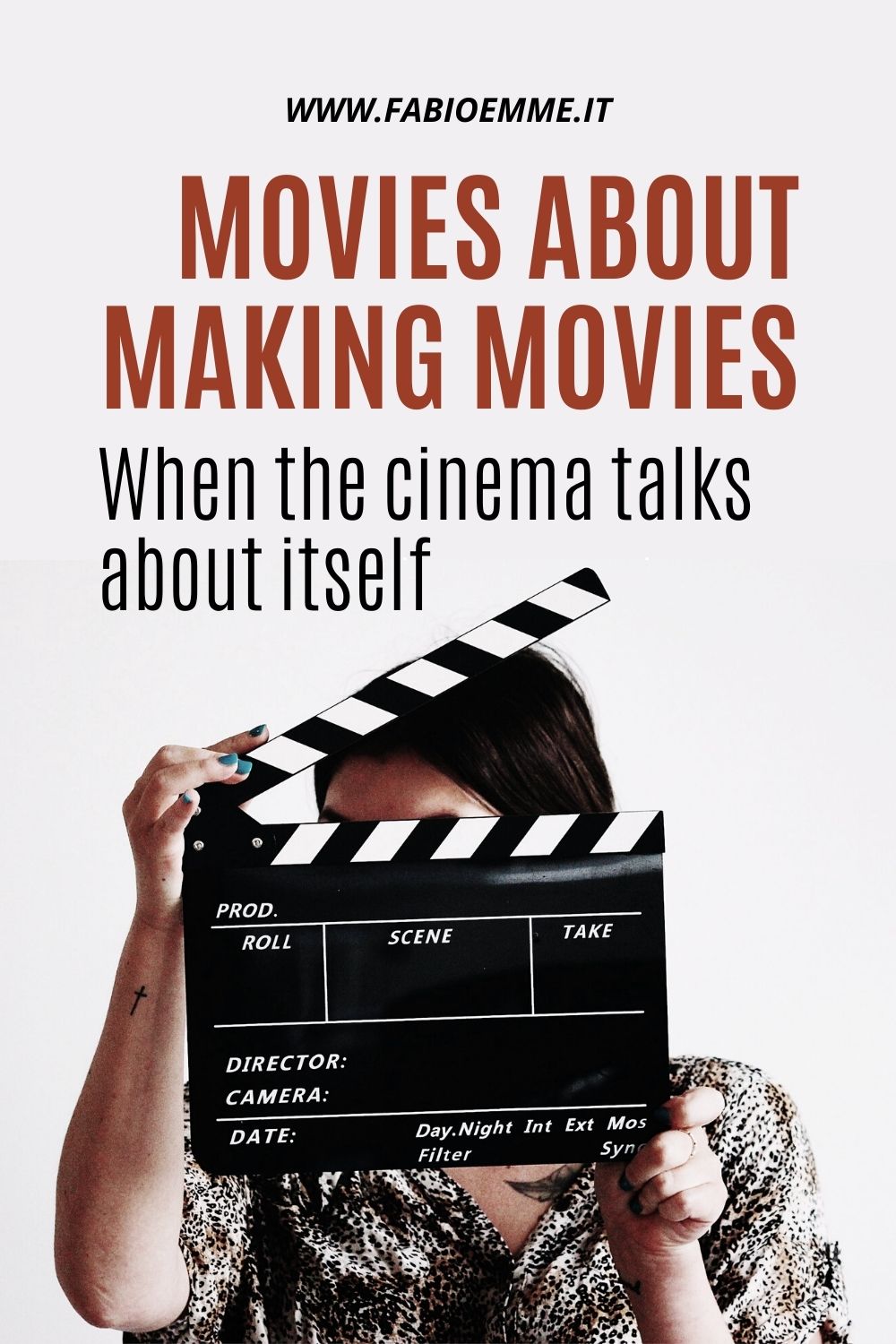 In today’s cinema, it is not the same as the one of the past, radically changed in its way of making the films that so much make us dream.

Not only over time have obviously changed the technical means with which to work, today much simpler and accessible for all.

But even the public has become more demanding and arrogant, driven by social approval anxiety that seeks majors.

This led to dozens of remakes and reboots desperately trying to resurrect successful movies by reviewing them as new.

So what can a new director do when he has the talent and a story for his film?

Now, the titles we’re going to talk about today are a perfect example of how you can make movies the same beyond the fashions and trends of the moment.

So let’s grope into the dark of the room because the screening has already begun.

But do not be afraid, you have not missed anything yet and indeed the best comes right now.

A successful director is at the start of filming his next movie.

The producer, the leading actors, and the rest of the crew are constantly on him without peace.

All of them, in fact, are eager and curious to know what his new story is about.

But in reality, he doesn’t have a real script for the film yet, but only a series of ideas that he can no longer remember.

Unable to write anything valuable, he spends his days in an out-of-the-way hotel with his mistress.

The situation becomes even more complicated when his wife arrives in town.

All he’s trying to do is postpone every decision and buy time, both at work and in marriage.

Inevitably, all these events will intertwine in a destructive ending with the peaceful taste of a new rebirth.

The cinema reinvents itself

8½ is an immortal masterpiece of Italian and international cinema and a bright beacon for directors worldwide.

Definitely the most famous work in the world by Federico Fellini as The Sweet Life from a few years earlier.

A clearly autobiographical story about a director in a creative crisis and personal identity.

This cult has inspired and continues to inspire one generation after another works very different from each other.

Thinking that everything was born from the doubts and insecurity of this great artist, the heart of hope opens to all aspiring directors in the world.

Fellini felt stuck in his role as an author and teacher, paralyzed by the expectations of every new film.

And precisely from this creative crisis, the genius brings out an unsurpassed and timeless meta-cinematic comedy.

A direct message to all those who work in the cinema, continuing every day to believe in the art of creating dreams.

Art, dreams and memories of a great author

The director makes an overview of his life through the eyes of Marcello Mastroianni, a charming, melancholy artist.

A not easy task carried out with the usual charisma and irony from dear old Snaporàz.

A nickname born from Fellini’s mind while working with him and making fun of his proverbial phlegm.

Always hovering between the bored and the amused, the actor moves along every scene, attracting the rest of the cast.

A cast that encloses the Italy of cinema that was, with all its strengths and weaknesses.

So we have an amazing Claudia Cardinale, unnecessarily courted to be a protagonist.

Sandra Milo is the dissatisfied lover, attracted and rejected like a child by the whimsical genius.

Finally, among my most beloved characters of this cult, the superb horror star Barbara Steele.

The look and its movements will be filmed, as already mentioned, by Quentin Tarantino for the bad girl Uma Thurman in Pulp Fiction.

In short, a unique and inimitable film and an essential starting point for anyone who wants to make a film.

In a small village in Vermont, suddenly, a film crew swoops in.

Fleeing from another city due to a sexual scandal, the producers hope to shoot their film undisturbed.

Initially, everything seems to be going well, and the citizens are happy to host the Hollywood entertainment circus.

The location is peacefully quiet and, not to mention, could save a lot of money for the production.

The screenwriter finds love with a beautiful local librarian who also helps him to rewrite the story.

But very soon, a series of problems emerge due to the actors’ whims and the cynical exasperation of the director.

Then, when a new sex scandal appears on the horizon, the production seems to be finally shipwrecked.

At that point, everything will be in the hands of the young writer, who will decide the fate of all the other characters lying or telling the truth.

A little big story about how to make movies

State and Main is an intelligent and evil comedy about the Hollywood film industry.

It is a system that grinds what it produces like a meat grinder, emptying it into the simple cost versus revenue ratio.

Just as producers try to save every penny possible, the town wants to make the most of the unique and unrepeatable opportunity.

The rest of the crew indulges in its vices and sins that, accumulating all together, bring closer and closer to disaster.

But despite the underlying pessimism, the film instills optimism and a still romantic view of the cinema itself.

The poor writer is the soul of history, trying to keep up with the constant changes of the last moment.

Therefore, his inspiration and, therefore, pure love, not only for his art but also for a woman who spurs him to be a better man.

The pen is mightier than the sword

David Mamet has always been a guarantee of class and originality.

The former Pulitzer Prize winner writes with his usual mastery an entertaining but not a stupid story.

With his pen, he dismembers the same world of cinema he has been part of for a lifetime, using comedy to smite him.

In addition, he can count on a huge cast full of talented actors that enhances his pen author.

Philip Seymour Hoffman is the protagonist, and his character is nothing but the mirror of Mamet himself.

A confused and tossed writer but holding hard towards the changing demands of production.

The producer is the superb William H. Macy, a talented character actor who tries to keep a boat full of holes afloat.

Her main problem is Alec Baldwin and Sarah Jessica Parker, a perfect couple of never happy and capricious stars.

Two spoiled movie stars who make the crew suffer and the writer himself with their stupid daily complaints.

State and Main came out decent in the box office war, though he never became a box office champion.

A satisfactory result for a film and a director who knows how to make a biting satire of his own craft as a skilled craftsman of cinema.

A famous Hollywood producer is going through a challenging time in his life.

His private relationship with a colleague has come to an end even though he does not find the courage to leave her.

At work, a younger and more ambitious new product comes along and seriously threatens his career.

Finally, a stranger continues to threaten him with anonymous letters, even to put snakes inside the car.

Exasperated and exhausted, he sets out to find this man whom he believes to be one of the many writers he has rejected.

When he finds him, their conversation degenerates, and he kills him in a shabby alley behind a movie theater.

Magically, the murder seems to bring him luck, and his life turned out for the best.

His career resumed, finding a phenomenal script to turn into a blockbuster.

He also finds new love in the companion of the late writer he killed. But the police are investigating, and it won’t be long before we get to his trail.

Crime pays and morality is useless?

The player is a cruel and romantic portrait of Hollywood entourage making movie processes and decisions.

The gospel of expensive American production is being overturned from the ground up.

It is not the good winning in the end, and the bad one is not punished for his crimes.

Being ethical and moral does not pay, and loyalty and love towards the partner are only for fools.

It is useless to be faithful to your values and principles within the art that is now only marketing for the easy box office.

The most striking example is the young, excited screenwriter who proposes a prison drama.

He initially decided to make it a movie without stars, sex, or the usual pacifying happy ending.

But when the producers press him while filming his story, he will end up selling off all his ideas without so many compliments.

The reality behind the star and stripes dream machine

Robert Altman once again proves to be the best at directing a chorus of phenomenal actors.

The legendary director of Short Cuts is committed to making a meta cinematic film in between black comedy and criminal noir.

A story that combines the greed of Majors managers and the despair of the myriad of small actors and screenwriters looking for a chance.

Tim Robbins in the main role usually proves to be an immense actor with a masterful test.

His character is a liar, coward, devious and manipulative, and yet he manages to enjoy the same passion to his epic.

Greta Scacchi, a sexy and intelligent tormented artist, is the flame of love that rekindles his spirit and passion.

Unconsciously, the woman falls in love with her boyfriend’s killer, caring for him and helping him in difficulties.

It is impossible then to name all the cameos of the actors who agreed to appear briefly in the film.

A sample of the fauna of the Hollywood ecosystem such as Burt Reynolds, Cher, Bruce Willis, Julia Roberts, or Malcolm Mcdowell.

In short, an indisputable masterpiece of the cinema was loved and awarded that same year in Cannes for the best director and leading actor.

In conclusion, a film that I consider perfect to be the final exclamation point for this series of great directors and screenwriters.