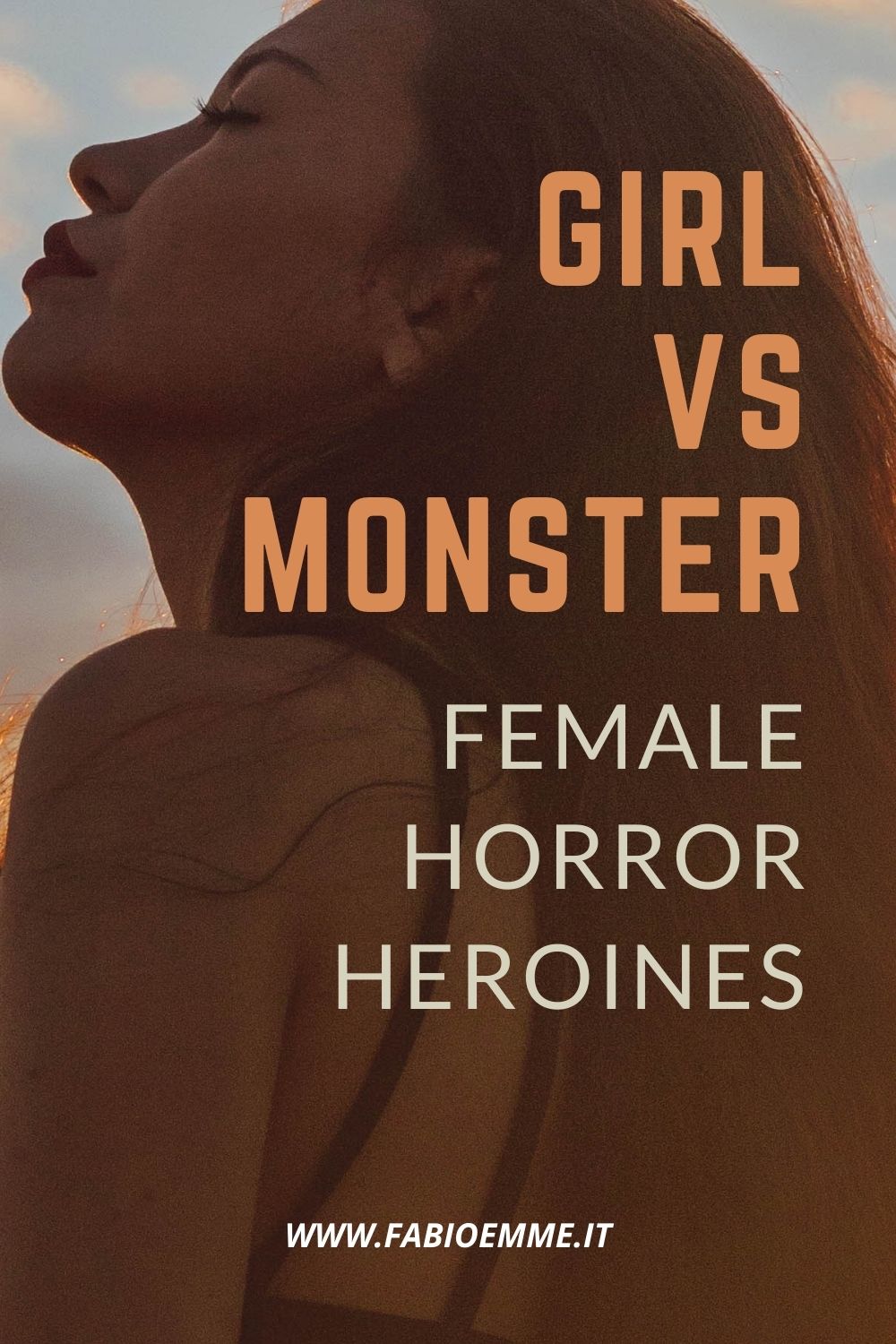 Girl vs Monster: let’s face it, we like to see a female heroine fight against a monstrous creature.

Although women’s gender has been underestimated for too long in film history, things have changed for a long time.

Indeed, in the past, actresses hardly had any other roles than girls to save or fatal femme diabolical and seductive.

Two stereotypes that exalted their supposedly fragile or exaggerated sexuality above all else.

But as they’ve shown us over the decades to follow since the dawn of cinema, our girls also kick ass when it’s necessary.

So we watch together three movies where the beautiful are protagonists and women of action against monstrous unspeakable unknown amenities.

A group of friends decides to spend an adventurous weekend exploring some caves in the Appalachian Mountains.

They love extreme sports and are have strong physical training, so do not expect great difficulties.

Being too confident of their abilities, they descend into the darkest depths where explorers have never gone before.

Suddenly a rock section falls, blocking their way back. At that point, they have no choice but to keep forward, hoping to find another exit.

But one of them seriously injured her leg, and another has signs of psychological failure.

The woman was a young wife and mother, losing the whole family just one year before with a car accident.

As if that were not enough, they discover with terror not being alone in the dark depths of that abyss.

In fact, in that area where humans have never entered, a human species has survived that evolved differently.

These humanoids are extremely agile and, although completely blind, they can hear the smallest noise in the dark.

Without hope of receiving help from outside, the weekend will become a fight to the death Girl vs Monster.

An ancient danger lurking in the dark.

The Descent is a horror girl with four female heroines vs a bunch of monsters who hunt together like animals.

The claustrophobic setting enormously helps the feeling of imprisonment of the protagonists.

Despite the tight corners and spaces for each shot, the direction never creates confusion for action always clear and clear.

The music is also present wisely in the few moments where it really needs, without ever being oppressive and annoying.

This choice leaves the strict caves, the pace rhythm, and the character’s psychology to do all the dirty work.

The tension in the group of friends increases with the progression of fear, accentuating the small misunderstandings already existing.

The arrival of the monstrous enemies, finally, is the final shock that separates them.

Therefore, beyond the horror genre, this is mainly the disintegration story of a group seemingly initially close and strong.

An English author of great talent

Neil Marshall is a director about we talk before, appreciating his excellent dystopian action Doomsday of 2008 with another female heroine.

His style is strong of an always different choice of genres and themes in his stories.

Very different movies united by the elegant effectiveness with which the director combines entertainment with the intelligence of the plot.

A talent that confirms even in this movie with few actresses and dark and narrow natural locations.

The women’s psychology is not trivial, rather using internal tension in the group for the madness of her story.

Above all, of course, the character of the grieving widow Shauna Macdonald stands out.

Trying to lift her from her pain, her friends unwittingly frame her in a nightmare with no way out.

A mistake that all of them will pay dearly with an ending without redemption or happiness for anyone.

The Descent was a big achievement in cinemas, earning nearly $60 million worldwide against $3.5 million of its cost.

This success allowed the director to get to bigger international productions, like the last Hellboy remake in 2019.

A young and beautiful girl joins the last second in a military flight departing for Samoa.

The crew is entirely male and is immediately openly hostile to the female officer.

Not wanting her on board, they relegate her to the cockpit of the machine gun placed under the aircraft.

In addition, she carries a mysterious suitcase whose contents are protected by military secrecy.

This bores the rest of the troops, unwilling to believe that such an important mission is entrusted to a woman.

Therefore she’s alone and constantly annoyed by the constant stupid and masculinist comments on the radio of the soldiers upstairs.

When a monster starts to damage the outside of the plane, none of the men want to believe the girl.

As if that were not enough, their plane is spotted and targeted by the enemy.

The female heroine will have to fight the incredible creature with her bare hands in the impossibility of doing anything.

The real monster is ignorance

Shadow in the cloud is an exaggerated and funny action movie featuring a young female heroine fighting prejudice.

Before the monster vs everyone part, the girl has to face the ignorance and stupidity of the men in uniform.

In itself, a military world is strictly under hard rules to follow diligently, especially during a time of war.

The airplane where the movie takes place thus becomes a miniature of the outside world.

An extreme situation where she tries to be useful as possible, against men seeing her only as a beautiful babe. In order to get out of it alive, she will have to oppose the stupid decisions of her superiors actively.

But even our heroine is not a saint and has a huge secret that hides from everyone else.

From baby actress to a sexy and tough woman

Chloë Grace Moretz is remembered for her role as the strong little costume female heroine in Kick-Ass.

Despite being young, the girl performed in good action scenes where she mercilessly tore apart her enemies.

Now she has grown to become not only even more beautiful but also an excellent actress.

Indeed, in the initial half of this movie, she perfectly holds the scene while completely alone.

Frankly, besides the girl, the whole male cast is just bloody meat for the monster and air combat vs Japanese.

At the direction, we have another woman, Roseanne Liang, who debuts in her first feature film.

She surpasses the test creating a small, fully functional world to tell from beginning to end her story.

The action scenes are full of explosions and fighting against enemies and monstrous and destructive creatures.

In total COVID isolation, Shadow in the Cloud was released on Amazon Prime, where subscribers could enjoy it from day one.

A mother crosses a road along a forest in the middle of the night with her young daughter.

Suddenly, their car breaks down, and the two of them find themselves alone in the dark, waiting for help.

Because of the alcoholic history of the woman, they do not get along.

Sadly, she’s carrying her back to her father’s after a disappointing weekend together.

This incident does not help their situation at all, further exacerbating their mutual hostility.

But very soon, this will no longer matter, and both will be forced to face a much bigger problem.

Indeed, that forest stretch is a monster’s hunting ground, starting a fight vs the woman and her little girl.

In addition, all those coming to aid will also be in danger of the bloodthirst of the mysterious beast.

Trying to resist inside their car, they can’t do anything but hiding and hoping that the dawn will come soon.

The Monster is a modern horror fairy tale reworking the old myth of the hidden wolf lurking in the woods.

Despite the simple plot, the story is not stupid and is told piece by piece with great cunning.

Our two protagonists are ambiguous characters, both mother and daughter, with their small sins and personal shame.

The fear of what cannot be seen is always palpable. Even before the protagonists realize it, permeating every minute of the movie until the end.

Each scene is carefully raise the tension at the right time, then hit hard when we least expect it.

A simple and linear style that is effective in its poverty, and for this reason, it is even more appreciable.

The movie is never boring, and our two female heroines have human attitudes and reactions in these extreme circumstances.

Personally, I am always happy to recommend these low-budget productions.

The little money is offset by a passion for what is told. Squeezing the maximum from the few resources and technical means, the result is really remarkable.

Thumbs up then for Bryan Bertino, the director, writer, and producer of this little horror pearl.

The two leading actresses are perfect for over an hour and a half to form a convincing problematic family.

Initially, we find ourselves sympathizing with the mother, Zoe Kazan, mistreated and ignored by her daughter.

Trying to reconnect, the woman seems to make things even worse.

But then, when we see some flashbacks of little Ella Ballentine‘s childhood, we understand her attitude better.

The monster will undo this pattern of behavior, reducing their thoughts only to survival.

But in the darkness of the woods, there will finally be room for forgiveness and sacrifice.

So let us all together change the fate of this little movie, bringing it to light on our TV.