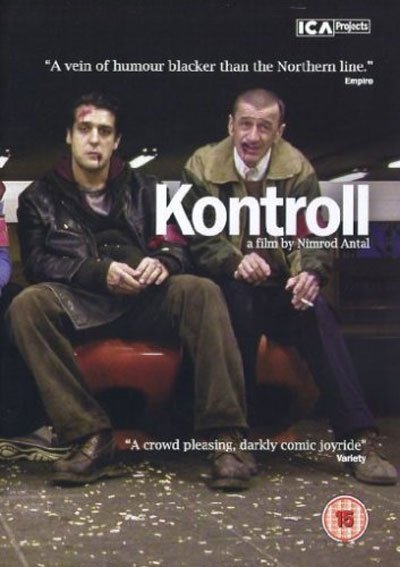 Kontroll is a story that takes place completely in the bowels of the Budapest metro.

Some friends work as controllers, fighting daily against passengers without tickets.

These boys are often crude and naive but still do their job diligently every day.

They are separated into different groups that have been used to working together for a long time.

Each group has a strong rivalry towards the others, being mutually hostile.

They always challenge each other in stupid fights and competitions as if they were many small rival gangs.

The most serious challenge is a risky race in the dark tunnels against the day’s last train.

To prove their superiority, the two most famous groups will face each other risking their lives.

But in the depths of that underground city, it is possible to find friendship and even love.

A love coming in the shape of a costume nice girl and is the daughter of an elderly train driver.

But to disturb the relative peace comes to a mysterious murderer accumulating victims having fun pushing people under the trains.

Once upon a time in the Budapest metro

Kontroll is a mix of extremely original comedy genres, thriller, and even fantasy in the unreal of certain situations.

This world is close but separate from ours, with common characters in their empty and repetitive daily routine.

A modern fairy tale immersed in the stations’ artificial lights and trains emphasized humor and a superb choice of soundtrack.

The plot travels as fast as public transport that comes and goes at every stop.

Moving from situation to situation, the characters are a group of modern musketeers fighting against the boredom of work.

But in their midst, we could hide a homicidal maniac whose identity or motives will never be known.

The thriller breaks the rhythm of comedy intelligently, alternating sensations and altering our perception of reality.

Indeed, it may be difficult in the end to distinguish some dream oneiric scenes from the brutal real world.

After some works where he already showed his talent, this is the great international leap for the director Nimród Antal.

Costing just under $300,000, the movie grossed over $10 million worldwide, launching its career high.

Kontroll was created with many difficulties working part-time during the closing hours of the Budapest metro.

But the result was greatly appreciated by the metro workers who finally seen a story where they are protagonists.

Many of them identify with the protagonist Sándor Csányi, an unknown actor who performs a respectable performance.

Returning from a tragedy in his life, man constantly lives underground night and day without ever going out.

But trying to stop the killer and falling for the lovely Eszter Balla represents for him a final chance of redemption.

To summarize it is a very peculiar film that many of you might not know and I am therefore happy to recommend it as I was happy to see it.

I hope that when you get to the end credits, you share my enthusiasm for this little Hungarian movie.