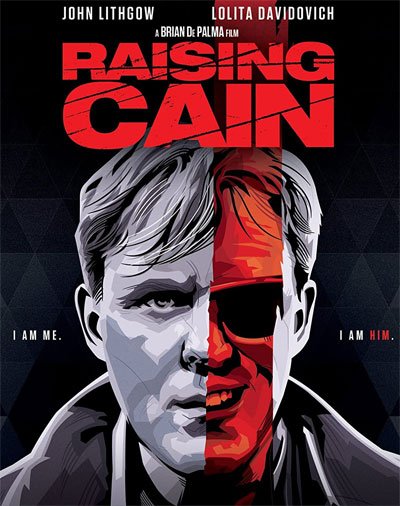 Raising Cain is the story of an apparently happy child psychologist who raises his little child with his beautiful wife.

However, he hides terrible abuse and bullying in his childhood, which he has never told anyone.

As a result of that trauma, he suffers multiple identity disorder, and countless personalities coexist in his mind.

Among them there is an evil twin responsible for some abductions of children.

In fact, his father was a psychopathic doctor who voluntarily fragments his son’s psyche to pursue his research.

Since his death, the son continues his work kidnapping children for his sick experiments.

In addition, his young wife meets an old boyfriend with whom he again begins a sexual relationship.

When he discovers it, he can no longer hold back all his madness and repressed violence over the years.

Thus, the madman can’t stop and commits a series of murders to cover up his crimes.

He is entirely lost while the police are on his trail, following the trail of blood that leaves behind.

But his wife is not another of his weak victim, fighting fiercely to save his daughter.

The endless abyss of a human mind

Raising Cain is an exceptional thriller within the bottomless and limitless chasm of human madness.

Every scene grows in stupendous whispers to the viewer with continuous twists in the plot narrative.

Tension is present for the victims of the murders as much as for the psychopath protagonist’s various identities.

The always present sexuality accentuates the criminal plot, actively involving in the rise of madness.

It is not by chance that the first kidnapping and murder occur after the husband fails to make love.

Distracted by his crying daughter, that leads to the raptus making him attack a woman in his own car.

The multiple identity disorder of this character is obviously the foundation on which the whole movie is based.

Later clarified by a psychologist who worked with her father, she wrote a book called Raising Cain.

Indeed, the book was about a traumatized child who is nothing but the same protagonist.

Brian De Palma directs this thriller clearly full of style and references to the cinema of Alfred Hitchcock.

The crazy shrapnel of the protagonist’s psychological trauma is the engine that drags everything else with it.

The protagonist is the charismatic and incredible John Lithgow, who stands out dividing into five different roles.

His various personalities always fight against each other, having very different purposes, deceiving and hindering each other.

So his situation is always precarious and on the verge of falling at any moment.

Although he initially manages to deceive the police by blaming another man, later suspicions inevitably return.

In the wife’s role, outstanding and beautiful Lolita Davidovich is unaware of her husband’s madness.

The actress manages to be sexy and sensitive while eventually becoming a mother who struggles desperately for her daughter.

Impossible not to mention the Hitchcock influences of the scene where she almost drowns in a car.

A scene that is absolutely identical to Psycho of 1960, also a character with multiple identity disorder syndrome.

Raising Cain had a good result at the box office, unfortunately, without becoming an international blockbuster.

So many adults and young people might not know it, quickly hidden with the continuous release of new movies.

If you have never seen it immediately recover, we can hardly see it today as a cinema of this level.