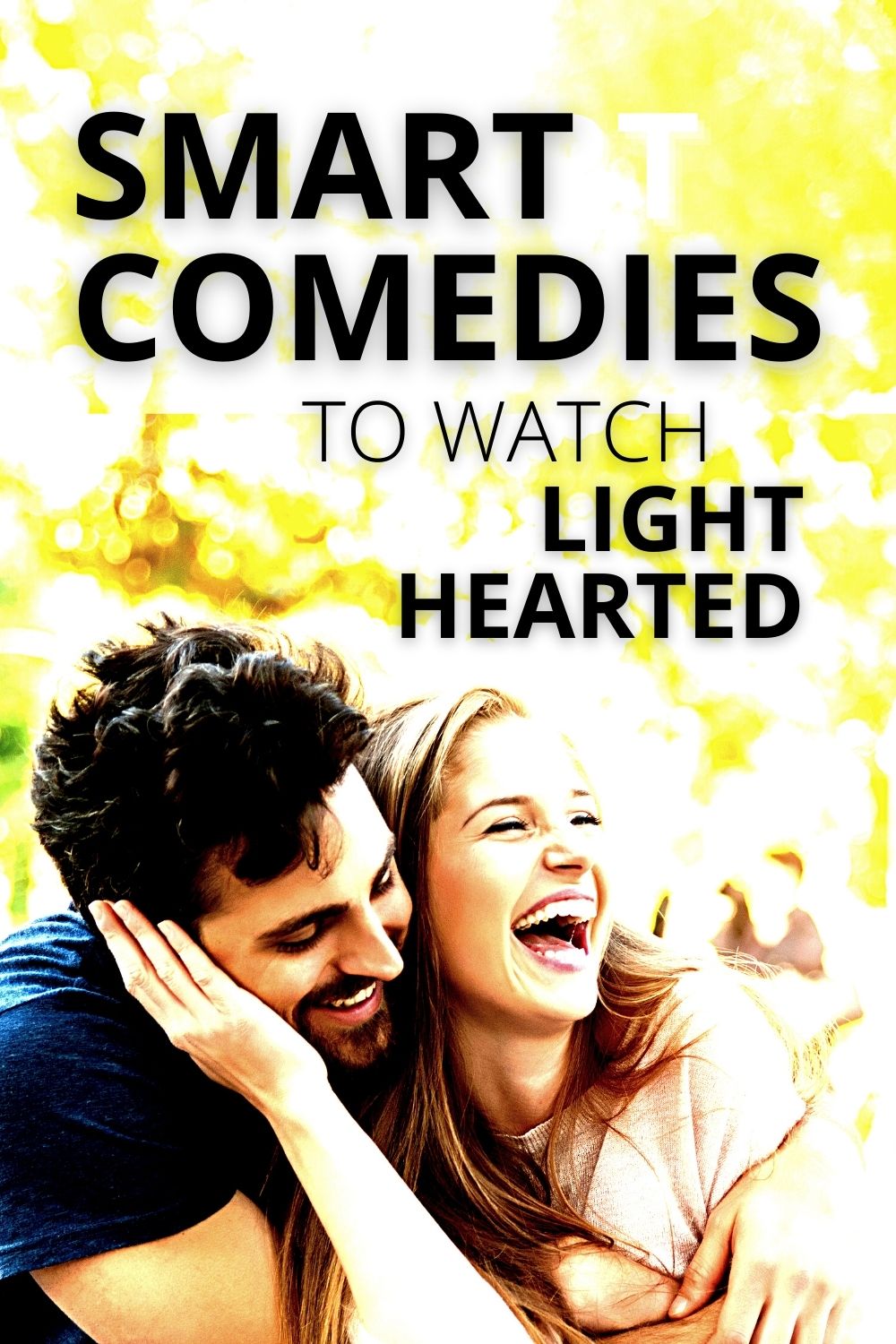 When life comes at us with its wickedness, we’re all looking for a smart light hearted comedy to lift us up.

Intelligence is essential in comedy to not fall into the uselessness of trivial and vulgar of the most incapable directors.

If we can rejoice and have fun without turning off the brain, it remains something in us even after the movie’s end.

We can become friends with the characters or find them unpleasant, that’s up to each of us.

But following an exciting story, even to laugh and nothing more, is definitely a better medicine for our sadness.

So get comfortable and turn off the lights, and we’ll see some movies together.

A young playwright is workless for a long time, with his colleagues mock him after his last failure.

Beginning to doubt his writing ability, he finally finds a strange actor who commissions him a comedy.

He is excited by the opportunity and desperate because of the little time to create a completely new text.

When, suddenly, he meets a charming costume designer together with his best friend.

The beautiful girl is romantic and passionate about rhyming verses, so he helps the friend by suggesting the right words.

This inspires him to create a totally different piece with Cyrano de Bergerac’s new protagonist.

Writing the pages as the ideas take shape in his mind, he starts the theater work to stage this story.

He faces enormous difficulties, with a thousand unforeseen events that seem to lead him to failure inevitably.

The production is run by two criminals who impose their lover as the protagonist.

The actor who has to play Cyrano is opposed by the justice that wants to prevent him from acting.

In addition, every day, he constantly writes love letters to his muse.

This makes it full of ideas but inevitably ending up making his wife suspicious and jealous.

In the end, he will be rewarded with one of the most universally loved plays in the history of France.

The end of a century and the advent of cinema

Cyrano, My Love is a light-hearted, smart, and romantic comedy straddling the age of theater and the world of cinema.

Two forms of art and two different worlds connected in an inextricable way, destined to fight and live forever.

Right at the beginning, we see the protagonist, the young writer Edmond Rostand, get curious in a cinema.

Admiring Lumière’s invention, he immediately realizes that it will become the most popular entertainment in the world one day.

The movie is a delightful meta cinematic and theatrical misunderstandings game, where the protagonists are unconsciously creating an immortal masterpiece.

In addition to being repeated hundreds of times in theaters, it will then reach the cinema in multiple forms.

For example, one of the Cyrano de Bergerac-inspired movies was the funny 1987 Roxanne with Steve Martin and Daryl Hannah.

In the long run, this story witnesses a timeless Platonic love genesis, exciting today as it was a century ago.

Alexis Michalik smart wrote and directed his first comedy, combining his love of cinema with that of theatre.

The staging, costumes, and era reconstruction are made divinely, and the direction moves through the scenes with naturalness and simplicity.

The characters are also at ease in that theatrical habitat full of spontaneity, rebellion, and desire to create art.

Thomas Solivérès is an excellent leading actor, good at acting in virtually every scene, leaving room for his exuberant colleagues.

In fact, this whole little world revolves around the pen of his character, constantly alive in the moment’s inspiration.

She will be the first real light hearted Roxanne, even if the world will never know her existence.

In short, for the lovers of the great classics, a masterpiece coming from nowhere lighting the world with a smile.

Everybody Wants Some!! narrates about the last three days before college starts for a young student in the 1980s.

The USA historical period is a time of ethnic and social diversity, where everyone accepts others without too many problems.

As soon as he got to campus, he met his new roommates, all baseball players of a successful team.

The boys are exuberant and constantly challenge each other with small trials and jokes, living their youth happy and carefree.

In fact, they spend all their time together, drinking, smoking, and trying to conquer as many beautiful girls as possible.

The girls are equally cheerful and uninhibited, organizing parties and cheerful evenings in the disco.

A cross-section of American life, without dramas or unrealistic excesses, perfectly frames the theme of change.

In the first place, the nation’s changes heading for a new era will no longer be an economic power.

On a smaller scale, the young way of thinking passes from carefree adolescence, preparing to become men and women.

And the final takes place precisely on the school benches, perhaps beginning to become more serious and mature.

As mentioned above, Everybody Wants Some!! is a smart comedy that only takes place over three long days.

The movie closely follows the hours of boredom and fun, quarrels and jokes, love and sex of this cheerful comrade.

The direction is minimal and elegant, fully representing not only the clothes and cultural and musical fashions of that era.

Indeed, the immersion in the historical period is total, and we all feel aboard on a nostalgic time machine. The direction’s will is to tell many small light hearted personal stories.

Exploring their relationships, phobias, and aspirations, we discover a micro-world that is a young and smiling adult’s miniature.

They are not stupid, reading novels and philosophy books alongside the beautiful music of those years.

In essence, we can say that this movie is an experience that enriches intellectually and culturally all of us.

Nostalgia and love on the 80s sound rhythm

Richard Linklater again shows his music choice for movie knowledge, like the hilarious School of Rock with Jack Black.

In this case the various music tracks of this smart comedy are not a simple background to listen with pleasure.

The boys, indeed, live and move concerning musical genres inside their home as the parties attending the night.

So they move from disco music to country clubs, always rubbing close beautiful girls, up to a wild punk concert where they dance furiously.

Blake Jenner plays with genuine conviction the latest arrival in the cheerful company of friends.

A guy likes many with a simple and sunny smile and an open and sincere attitude towards the world.

Together with him, we are greeted by the fauna of bizarre and funny characters.

Sometimes a bit crazy and hysterical, we surely remind familiar faces of our lives in all of them.

And like the protagonist, we find perhaps (or maybe not, we will never know) the first hint of true love.

Finally, after many chicks and drunk nights, a more serious and lasting relationship than a simple night of sex.

Everybody Wants Some!! was not a great success in the box office, sadly, becoming a small undervalued cult.

So I leave you the pleasure of discovering this light hearted movie in your home’s comfort.

You will find something of your lives inside every scene, hoping you feel the same emotions felt by me.

The Final Girls begins with a young girl trying to put her life back together after her mother’s tragic death.

She was a little horror movie actress, died years early in a car incident.

After a troubled period, she begins to hang out with friends again, organizing an evening together at the cinema.

However, she does not know that the movie’s main actress of the night is just her deceased mother.

In addition, during the projection, the cinema magically disappears, and the small group of friends falls into the movie.

Since it is one of the horror movies where teenagers die badly, they immediately panic. Trying to figure out how to return to reality, they’ve to cooperate with the movie’s dumb and joyful characters.

But the girl has not so much hurry like the others.

While they are in the movie, in fact, she has the last chance to stay with her mother again.

The Final Girls is a bizarre and almost two-sided light hearted stupid and smart horror comedy.

Indeed, behind the various protagonists’ apparent stupidity, it is intelligent and fun in its ideas.

The characters continuously play about knowing in advance the various clichés slasher of horror movies.

Interacting with the chosen victims’ protagonists, they try in vain to convince them that they are in a movie.

But soon, they understand that they are equal protagonists and potential victims too.

So the same murderous rules stand for them too, and the story explodes in a demential struggle for survival.

Taissa Farmiga is a cute young protagonist perfect for this kind of light hearted movie.

Moreover, her relationship with the mother is charming, considering she’s a fictional slasher character and therefore does not know her.

Malin Akerman plays the unaware mother. She will try to build a relationship with her daughter in the few hours at her disposal.

A relationship that peaks in the brilliant final fight against the serial killer with a sexy and sad striptease to lure him into a trap.

Todd Strauss-Schulson directs the merry company of friends destined for slaughter with great fun and lightness.

The director manages the slasher moments that we all expect to see by combining them with the mother/daughter story in a touching way, working to stay fun without overwhelming the story with drama.

The Final Girls is a slasher comedy not very well known and smart distributed in a few theaters worldwide.

Nevertheless, on the internet, it has its small niche of admirers, like the one who is writing to you here hoping to interest you enough to push you to give it a chance.

Burying the Ex – Never piss off your...