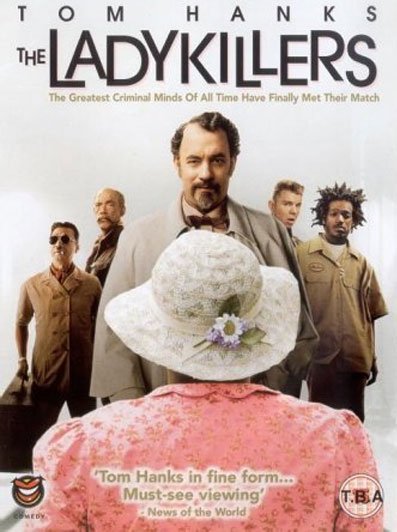 The ladykillers is a heist movie by Ethan and Joel Coen about five characters joining in robbing a casino vault.

Their leader is a dead language professor who has the idea and reunites them with a tempting job advertisement.

Although they are extremely different, each has particular skills essential for the success of the plan.

Renting the basement of a single old lady, the group begins to dig a tunnel to reach the booty.

The woman is extremely religious and a bit crazy. She also believes that they are a group of musicians who train to play classical music.

Living together while they work secretly is not easy because of the continuous contrasts between their personalities, exaggerated.

But despite their absurd and funny quarrels, they succeed and get their hands on a rich amount of money.

Finally, unfortunately, greed turns them against each other, and the old lady discovers their crime.

One of them will then have to kill the ladykillers, but it will not be as easy despite her harmless appearance.

The Ladykillers is an irresistible heist movie with a slow old tale pace and Ethan and Joel Coen‘s sharp humor.

His heart lives in the contrasts of the different personalities of his characters.

Five wacky and utterly insignificant robbers who experience the feat of a lifetime heist for once in their lives.

Each has its own qualities and an exaggerated attitude exploding into every dialogue with funny jokes and endless disputes.

The old lady who hosts them is just as incredible, ignorant, and naive, and joyful and with a big heart.

A widow living alone with her cat, harassing the local police, complaining about everything that bothers her in the neighborhood.

So when she reports the surprising robbery, no one will believe her right away, assuming she’s an unbearable lunatic.

Ambiguous characters filling with exuberant vitality a story that otherwise could be equal to many other heist movies.

Two directors who define the evolution of 40 years of cinema

With their friend Bruce Campbell as the lead character, they created a myth surviving today in a recent TV series.

Their career as directors begins with Blood Simple, a ruthless thriller noir where we can already see all their talent.

In the following years, the two geniuses created many cult movies for my generation.

For example, Raising Arizona, Barton Fink, and The Big Lebowski are just some of the unforgettable moments of their filmography.

In this movie, they manage a crazy and moody platoon under the command of the lunatic professor Tom Hanks.

The great actor performs in one of his most comic characters ever.

A man of refined and elegant culture and manners, contrasting with the vulgar and ignorant rest of the gang.

But he still manages to hold them together, one way or another, until reaching the final rich goal.

Irma P. Hall reaches the peak of her acting career, playing the memorable character of this elderly black woman a bit crazy.

Living in the nostalgia of her late husband’s memory, she bothers everyone around her with her complaints.

But he’s also an adorable character that we get attached to right away. And finally, she’s not even that stupid because she eventually finds out the plan of the little criminals.

Raising over $75 million in box offices, The Ladykillers was a commercial success for Ethan and Joel Coen.

Two directors that I personally love to madness and together with Woody Allen I consider among the best exponents of the American comedy of the last 50 years.