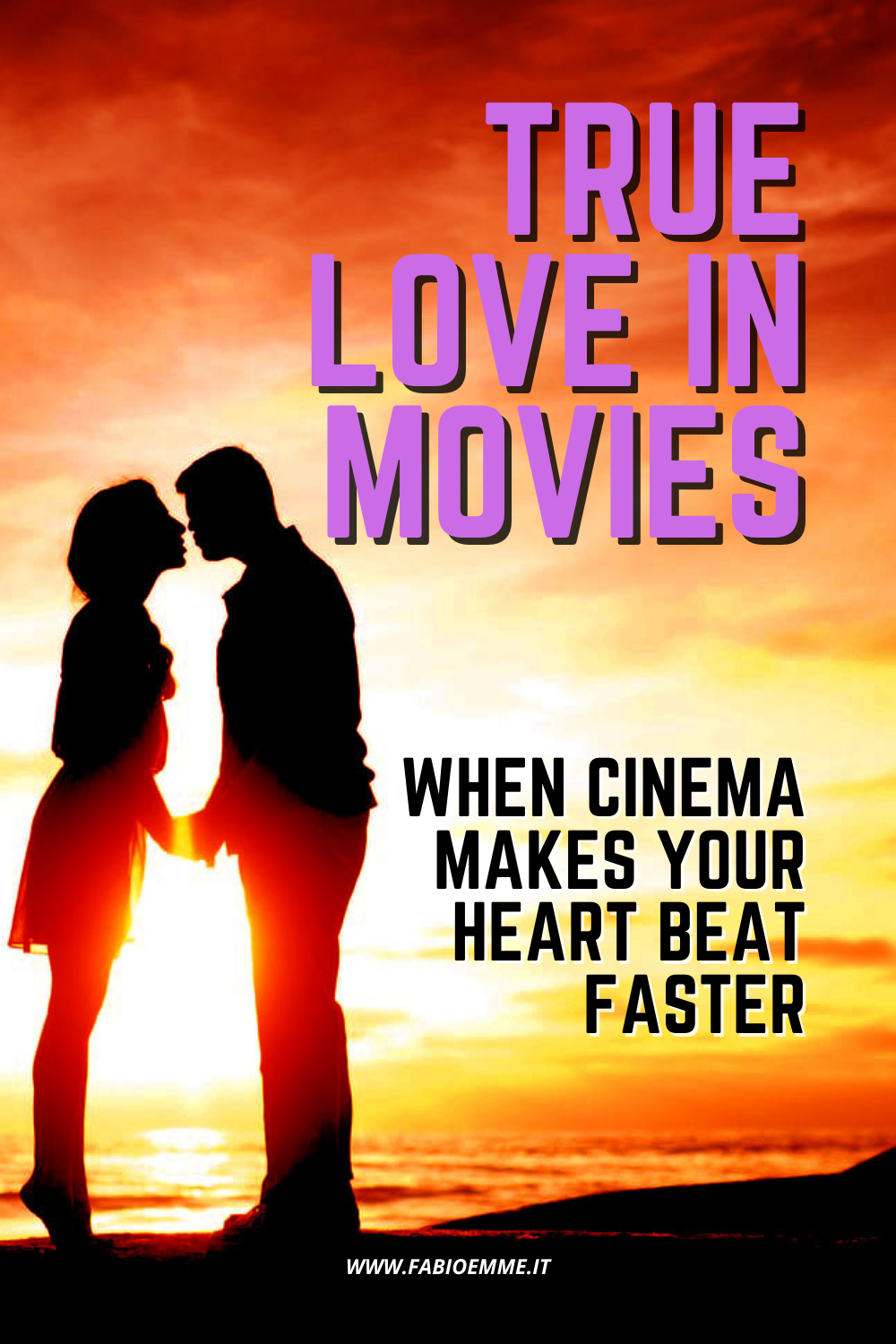 At cinema, as in life, the reasons of the heart never have peace in the eternal search for true love.

Men and women searching for their soul mate, always keeping the light of hope alight so as not to collapse.

And when these souls find themselves, something happens punctually that tries to put a stick in the wheels of lovers.

Does such a strong feeling have to be born from melodrama?

Are pleasure and happiness born only from loss and suffering?

Not necessarily, as evidenced by the choice of titles, we have on the list for you today.

Three movies with a different style and genre: a funny adventure, a sweet fantasy horror, and a dystopian sci-fi drama.

Three different approaches to the same tormented love theme differ from each other: the range of colors of human emotions.

So let’s go into the true heart of this article, renewing another day our oath of love for the cinema.

A little boy is bedridden sick when he receives a visit from his annoying grandfather.

Detaching him from his beloved video games, he begins to read him a fairy tale from an old book.

Initially annoyed, the child soon starts to enjoy the true love story between a beautiful girl and her humble servant.

When he gets on a ship searching for fortune, she swears faithfully to wait for him as long as necessary.

But later, she receives the heartbreaking news of his death after a ruthless pirate attack.

With her heart broken, she finally decides accept the advances of a rich prince who wants her as his bride.

Obviously, her servant is not dead at all and returns to the city to reclaim his beloved.

But the prince has no intention of letting go of the bone and unleashing all his henchmen on him.

Two funny criminals, initially hired to kidnap the princess, help him assaulting the prince’s castle before the marriage is official.

The Princess Bride is one of the most beloved cults of the 80s, a unique mix of magic, true love, comedy, and easy action.

The film was also a big success in the cinema, with its heart next to another fantasy of that period as The neverending story.

Moreover, another cult with which it has a direct thread with literature has in common since we follow history through someone who reads a book for us.

The rhythm is adventurous with a genuine childish ingenuity to entertain and entertain both adults and children.

His characters immediately enter our hearts and then never go out again, finally becoming real friends from which we regret to detach.

Just as, just as quickly, we gladly immerse ourselves in this fantasy world full of surprises around every corner.

The world is alive as the imagination of a little clumsy child but full of desire for adventure and romantic spirit.

And who among us didn’t dream of epic love in style during his childhood?

Other times, other actors and directors

Rob Reiner is a director who lost much of his fame much in the last 30 years. But even if he is now an unknown for the last generations, he remains the author of cult loved even today.

Movies with a different style and genre like the brilliant When Harry Met Sally or two stories from Stephen King‘s books like Misery and Stand by Me.

The Princess Bride remains his work that I personally loved and saw several times, both yesterday as a boy and today as an adult.

The protagonist is the nice Cary Elwes, blond with a clean face and the ways between a masked pirate and the rogue thief and gentleman.

Starting as a simple and humble handyman boy, his character then becomes strong and invincible for the love of his sweet princess.

Princess has the sweet, romantic, and hopeful face of Robin Wright, former troubled girlfriend of the famous Forrest Gump.

Finally, equally unforgettable are the two mercenaries Mandy Patinkin and the famous wrestler André the Giant.

Despite being secondary characters in this cinema fairy tale, the couple enters our hearts, becoming almost a story apart itself.

The movements of the giant good and a bit dumb, together with the agile and bold swordsman in search of revenge, are immediately exhilarating.

In short, a film impossible not to love and impossible to forget once seen.

Thanks to one of the most successful couples in love ever, it firmly maintains its cult status yesterday as today.

After the death of his mother, a young American leave friends and work for a long trip to Italy.

Not having much money, he agrees to work in the fields with an old farmer during the day.

In the evening and at night, it explores the entertainment and culture of the small town of Polignano a Mare.

Here he meets a beautiful girl with whom he has an immediate and reciprocal understanding.

But every once in a while, she’s acting weird, obviously trying to hide something.

In fact, although she looks like a young woman in her 20s, she’s actually a woman of almost 2,000 years.

After her adolescence in Pompeii at the tragic eruption era, she goes back to a new youth every twenty years.

Ultimately, only after the spring end will they know if it will end in true love or a sad tragedy.

Spring is a sentimental drama with evocative fantasy and horror nuances.

A modern version of Beauty and the Beast, with a roles switch and a female monster.

The Italian setting of the small town is the background to the story with the beauty of the locations and the ancient culture of its history.

An opportunity to see, finally, nice and interesting movie production even in my Italian country.

Once a beacon and heart of cinema, Italy only perpetually remakes the same cheapest comedies and trivial politically correct dramas.

This film shows that even with a small budget, you can achieve remarkable results.

The plot is intriguing and intelligent, mixing with skill the feelings of the two protagonists to their fears and insecurities.

Two lost souls who find themselves by pure chance, both searching for true love to give meaning to their lives.

Can true love be horror?

Justin Benson and Aaron Moorhead are two young independent directors who know how to do their job very well.

These authors have a small but interesting filmography, such as Resolution or The Endless, that I recommend equally passionately.

The problem with telling the love story with a monster, very often, is not to make the monster actually monstrous.

Often, in fact, it aims more to make it strange and pitiful, but not disgusting and scary.

In this case, the girl turns into an aberrant and dangerous being, killing animals and people.

The model Nadia Hilker is beautiful, intelligent, and charming, fighting against the curse and blessing of her immortality.

A force of nature alive for two millennia, hiding its sad story behind the apparent innocence of any girl.

Lou Taylor Pucci is equally good at interpreting the first and only to really understand her after so many years.

Between them born a simple and spontaneous empathy, with intelligent dialogues and romantic/horror situations at the same time.

Their relationship grows and evolves naturally and credibly, even in the context of monstrous science fiction.

Finally, an amazing epilogue with a choice not belonging them, but only to the protagonist’s body and heart.

In the distant future, what remains of humanity lives under a rigid system of control.

The few survivors of the devastation of the earth have rebuilt society by banning any feeling.

All men and women, since their birth, are born with a genetic level block not to feel emotions.

Therefore they consider any stimulus, fear, or excitement as the symptom of a disease to treat with drugs and therapies.

After witnessing a suicide, a young boy begins to feel new and strange pulsations never felt before.

The doctors in charge of his case will undoubtedly diagnose Switched-On Syndrome.

Fearing the contagion, his colleagues immediately began to marginalize him in his solitude.

But one of his colleagues sympathizes with his situation, having for years been secretly suffering from the same aforementioned disease.

Between the two slowly begins a secret relationship, which soon leads to an irrepressible passion.

Ultimately they will be at risk since true love is the most serious symptom of the Syndrome final stage.

Equals is an intriguing dystopian utopia analyzed in the unusual light of a love story.

This future world, indeed is clean and highly technological, with a fair distribution of resources and wealth.

Education and health are finally democratically egalitarian, initially appearing to be a desirable system of government.

Unfortunately, the general well-being takes second place to the total suppression of any human emotion.

The doctors, indeed, consider them as our ruin main cause and therefore a problem to suppress in any way.

Aesthetically, even the houses and clothes of this civilization are uniform to the impersonal blue and white canon.

A bubble living aseptic separate from the rest of humanity, reduced to the wild in the few forests remained intact.

Therefore, this cinema utopia builds an ambiguous and widely debatable world, where heart and mind cannot live together.

A reality admirable in some of its ideological aspects, but bare and dull in its total absence of interpersonal relationships.

When true love becomes a disease to be cured

Drake Doremus directs this science fiction film while remaining true to his standards of directing and his most cherished topics.

The director loves narrating man and woman relational complexities, as he does in Like Crazy, already recommended in this article:

A couple of lovers, in this case, are the young Nicholas Hoult and Kristen Stewart.

Both have charm and uncertain souls, lost in their apathetic loneliness and sadness.

Initially fearing even to speak to each other, they then arrive at no longer denying their feelings.

Guy Pearce aids them, here as another infected with this imaginary disease.

Memento’s leading actor once again demonstrates all his talent, albeit in a minor and secondary role.

His tired face, but full of wisdom and humanity, contains at best the resignation of humanity.

We all understand perfectly that since we are all prisoners of a virus deeply changing our lives.

But, at least in cinemas, the heart for once can win over the cold and cynical bureaucracy numbers.