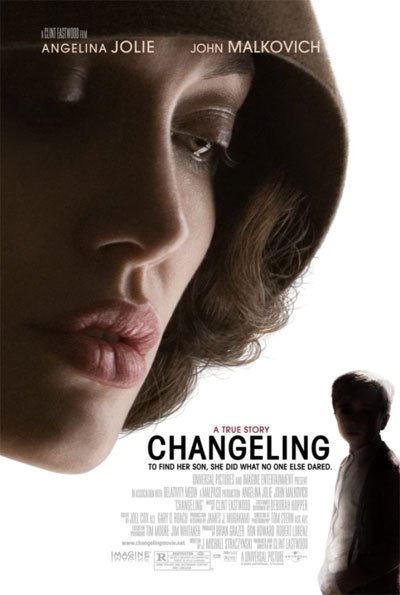 Changeling is the story of a young single mother ending in a psychiatric ward during the 1920s.

Despite the situation, she supports her little family by living in an acceptable state of well-being.

Until one day, the unthinkable happens, and his son disappears into thin air.

Contacting the police, immediately begin the search across the country.

The investigation is successful, and they find the baby and return it to its mother.

Incredibly, he’s not her son, and the woman gets angry and protests vigorously.

The police, however, absolutely deny any mistake and lock her in a psychiatric ward.

At the same time, a reverend friend of the woman begins to look for her when she disappears.

As soon as he unleashes a media uproar, an immense clamor of indignation in public follows the case.

Straightaway, the doctors and the police must give up and free her to avoid scandal.

After her release, she begins her battle against injustice and finds out what really happened to her child.

When a mother’s love is stronger than injustice

Changeling is a dramatic movie about one of the most shocking judicial episodes in American history.

The story has deeply shaken the nation’s consciousness, blaming the police for abandoning, imprisoning, and openly opposing a single mother.

The absurdity of locking her in a psychiatric ward cannot be justified in any way.

Even worse, their futile denial of any mistake later reveals the terrible fate of his son and numerous other children.

Indeed, while they were wasting their time to save face, a psycho was killing her boy on an abandoned ranch.

The unstoppable firmness of the mother seeking justice for her son had great consequences in the Los Angeles political establishment.

The tribunal thunders a sentence of great indignation towards the captain and the inefficiency of law enforcement.

Many officers lost their jobs and their respectability, who were held insanely responsible for this incredible and sad story.

Clint Eastwood directs one of his most exciting and ruthless films towards the American justice system.

A system that, at times, rages and overwhelms the lives of humble working citizens.

In this case, the victim is a woman already struck by a shocking family tragedy.

The beautiful actress gets rid of her sex symbol status, becoming an ordinary person with whom any mother can empathize.

Her personal judicial and family odyssey is as disturbing as it is terribly believable.

The psychiatric ward where the police decide to lock her up becomes a circle of hell with no way out.

A proud and arrogant man who doesn’t want to believe her and embodies all the stupidity and dullness of bureaucracy.

Proudly incapable of admitting his error, he will condemn the young woman’s child to death with his choices.

Changeling was a commercial success for critics and audiences, grossing over $100 million worldwide.

I personally recommend it along with all the legendary Eastwood filmography, both as an actor and as a director.

An indelible cinema old wise face and of which we are always waiting next movie coming out in theaters.