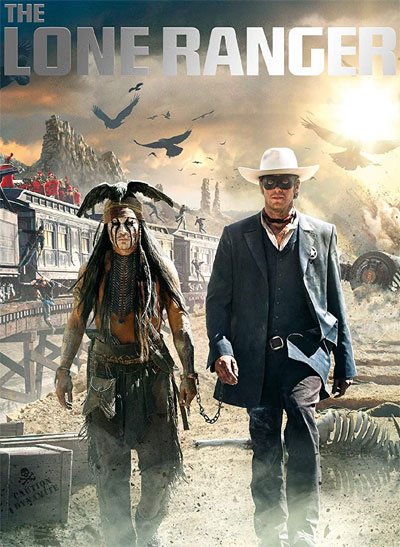 The Lone Ranger starts at a village fair full of shows and entertainment.

A young boy enters a desert tent that the comedians turn into a tribute to the old legends of the west.

There he meets an old Indian who tells him about his extraordinary adventures.

He traveled as a prisoner with a dangerous criminal in his youth when a gang stormed the train to free him.

During the attack, the Indian meets a young lawyer headed west to become a prosecutor.

But the vicious villain ambushes the rangers led by his brother, betrayed by one of his own.

The lawyer is the only survivor and starts wearing a mask to seek revenge.

Soon they discover they have a common target, as the criminal also ruined the Indian’s life when he was a child.

The two strange heroes begin to ride together, fighting a gang of criminals, a ruthless businessman, and a corrupt regiment of American cavalry.

In this world, the only law is the iron of the railway that stretches among the country.

These pure knights and the supernatural white horse will be the only remnants of humanity left.

The Lone Ranger is an adventurous western full of frantic action scenes and an irresistible childish comedy.

The story accelerates suddenly and then slows down, making us spend time with the lovely characters and start again.

The sense of humor is omnipresent and makes time slip away quickly, despite more than two hours of overall duration.

In essence, it is a wild ride through a world that no longer exists and perhaps never existed.

The two heroes become icons for the crowds’ love without seeking glory or silver as criminals and people in business.

But being two pure of heart, despite their naivety and madness, they find those other men spend a lifetime trying to conquer.

And despite all the blood spilled in search of the cursed silver, it’s fun to see the hero finally give the name Silver to his faithful white horse.

Western superheroes for both adults and children

Gore Verbinski directs a great entertainment movie perfect for both adults and children.

Armie Hammer is a charming protagonist who firmly believes in law and order. The harsh reality and the cruelty he attends will test his faith in the righteousness of man.

But even by becoming a masked hero, he continues to repudiate murder and violence, trying not to lose his morals.

Johnny Depp is undoubtedly the best character, playing a little crazy Indian running around with a dead bird as a hat.

However, as the story continues and evolves, we begin to understand its origins and the motivation that drove him away from his tribe.

Thus, we discover a man who made a grave mistake in his youth when two ruthless silver seekers cheat him.

Despite the split between love and hate for this movie, The Lone Ranger was a huge hit at the box office.

The audience rewarded this somewhat odd and moody western, which grossed over $260 million worldwide.

So if you haven’t seen him yet, do yourself a favor and get him back immediately.

Whether you’re old or young, western’s fan or not, I assure you you won’t regret it anyway.