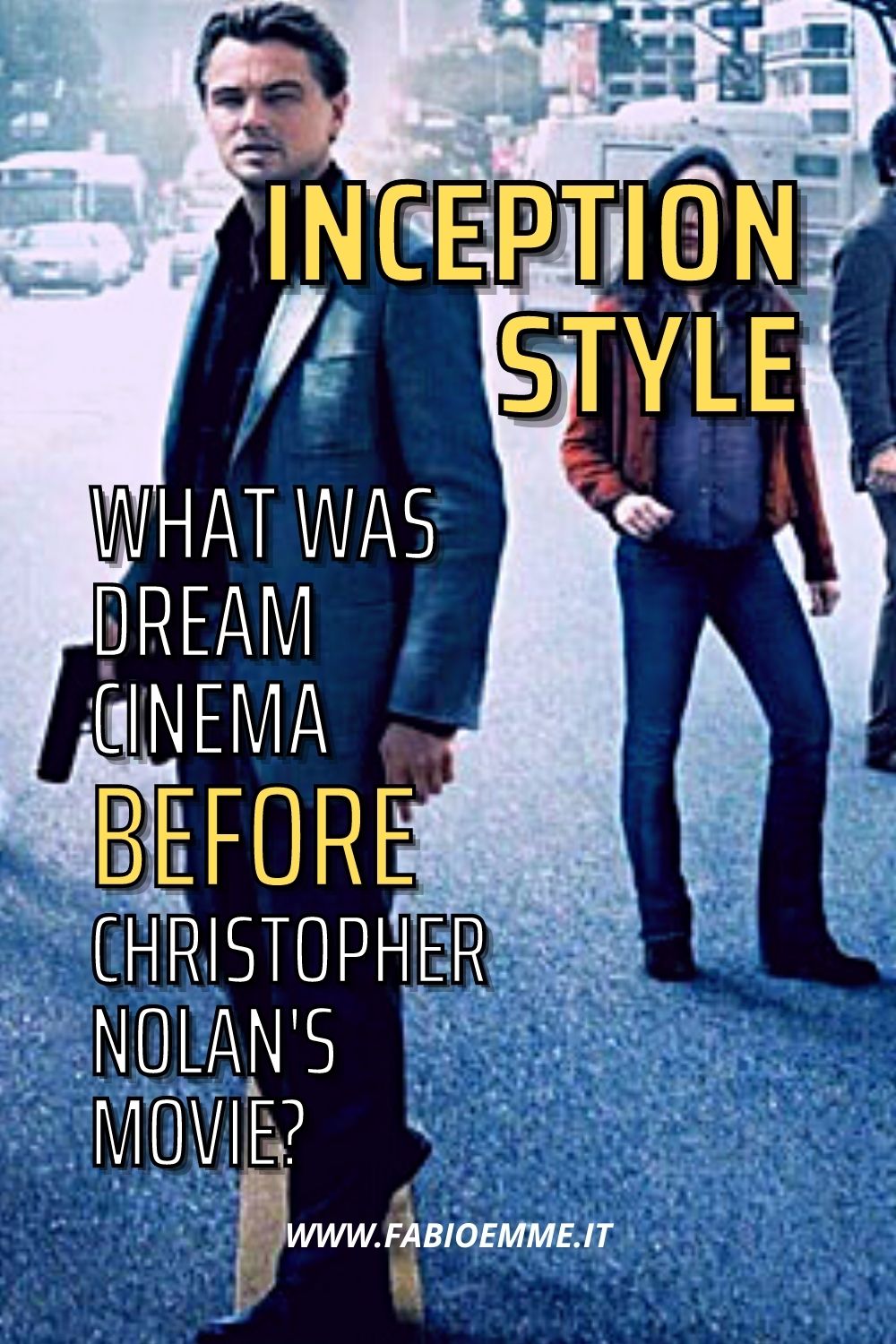 From the famous film by Christopher Nolan, the Inception Style was a moment of the cinema able to divide the audience as few.

Many admire with devotion his great imagination and directing talent in bringing his ideas to the stage.

Ideas that undoubtedly always start from an original basis and full of ideas of interest.

Carrying on his poetics about the potentialities and traps of the human mind, we cannot say that Nolan does not remain anything but faithful to himself.

Many others, however, sometimes quite rightly, complain about a style perhaps a little too heavy both narratively and visually.

A price that, sadly, many independent authors pay when they switch to produce blockbusters.

Losing a bit of the narrative freshness of his early Following and Memento, ignoring his new films is still impossible.

After (and during) the great success of the Batman trilogy, the director has always proposed something interesting, at least as a starting point.

Although sometimes the opulence of the large budget at his disposal weighs down him, his talent and creativity remain intact.

But going back to Inception Style, from what influences and inspirations did Christopher Nolan create his film?

Let’s take, for example, three titles, very different from each other as style and genre, united by the search and the journey inside the human mind.

In his youth, he took part in a special program of the government to discover the secrets of the human mind.

One day the scientist in charge of that program contacts him again, asking him to participate in a new kind of experiment.

Abandoning the old studies, research turns on the phenomena of sleep, dreams, and nightmares from now on.

By combining two subjects in the same dream, scientists believe they can solve the psychological problems hidden in the subconscious.

At the same time, the President of the United States is tormented every night by terrible apocalyptic visions.

The anguish and premonitions of death led him to reform his country’s nuclear policy radically.

Of course, his staff and senior army officers are concerned about his sudden decision to dismantle the entire American atomic arsenal.

They convince him to participate in the special sleep program in the hope of changing his decision.

But inside the research group hides a psychopathic killer who manages to kill his victims during dreams.

The boy, initially hesitant to participate, then becomes the only hope for the President to get out of the laboratories alive.

Dreamscape is a small, low-budget science fiction film from the 80s, a precursor of Christopher Nolan’s Inception Style.

The various dreamlike sequences within dreams always have glowing photography and unnatural architecture.

Just see the twisted corners of the rooms where the protagonists are hunted relentlessly by monsters born from their minds.

Instead of showcasing the movie, it’s scarier with some good scenes full of psychological horror.

But outside of dreams, the story becomes the classic thriller with conspiracy to take out the president.

Interestingly, however, the pacifist breakthrough of the White House’s number one citizen is seen as a threat.

The metaphor is easy and obvious, turning the American dream into a nightmare with no way out.

A dream cast for a forgotten movie

The main protagonist of this film is Dennis Quaid, in the launchpad towards a good career of many films where he will shine his charming American smile.

Countering him, his number one enemy is David Patrick Kelly, a historical evil grin that mocked and blamed the unfortunate gang of Warriors of the Night.

Finally, we have two veterans like Max von Sydow and Christopher Plummer, in the most important command roles.

Experienced actors consecrated by directors such as Ingmar Bergman or Robert Wise, the couple expresses only with one glance how many others do not with their entire filmography.

Joseph Ruben has always been an honest director, far from the spotlight as Christopher Nolan, yet able to combine excellent entertainment with original and interesting themes.

His most successful work to be remembered today is Sleeping with the Enemy, a good marriage thriller starring Julia Roberts.

But among his forgotten titles, there is also the excellent legal movie True Believer with the fantastic James Woods with the ponytail to be a cynical but passionate lawyer.

Or even The Good Son, which proposed the cute Home Alone‘s Macaulay Culkin serial killer version.

Dreamscape was absolutely put aside as if it never existed.

So if you ever get a chance to see him, let me know if I’m crazy. Or instead, if we can really consider him a spiritual grandfather of Inception Style.

A beautiful and brilliant researcher woman is experimenting with a new and dangerous telepathic technology.

Connecting with the minds of her patients, she tries to cure them of their deepest phobias and obsessions.

But every time, she may stay stuck in the fantasy, dreams, and memories of the people she connects with.

Until one day, she has to face her worst and most difficult case of her life.

The police give her custody of a vicious serial killer, guilty of numerous women murders.

He’s in a catatonic state, so they were asking her to enter the coma of her dreams.

The man was arrested after capturing his last victim, still alive and imprisoned in some unknown location.

The only hope of saving her in time is to find any clue in the killer’s diabolical brain maze.

Entering his mind, she will have to risk her life in the coils of his perverse dreams and traumatic memories.

You can’t lie in your dreams

The Cell anticipating the Inception Style representing the human psyche dreams to the level of an author’s picture.

But there is a difference between Christopher Nolan’s visual fantasy, also spectacular visual satisfying for the viewer.

Every scene in the killer’s dreams and memories is full of dark colors, intensity, and artistic perspective.

Horror and fantasy alternate in amazing and terrifying scenarios, terrorizing and captivating our eyes simultaneously.

The serial killer’s dreams are a tangle of delusions of omnipotence and sadomasochistic fetishism.

A place extremely dangerous, especially when combining with his painful memories of a childhood full of fear and humiliation.

In addition, his own body is another instrument of pain and pleasure.

Provided with studs piercing, the man hangs himself tortured while at a distance watching his victims die.

Hiding his madness to the outside world, he pretending strange and harmless.

A world in which the protagonist immerse totally to save his last prey and maybe even the serial killer’s soul.

The protagonist of this atypical horror fantasy is the sexy pop star, Jennifer Lopez.

The Puerto Rican singer is a daring doctor no matter what firm in completing her work.

Indeed, she returns several times to confront him in his dream empire, despite being terrified by his deviant sexuality insanity.

His patient is played by the great Vincent D’Onofrio, the famous Gomer Pyle in Stanley Kubrick’s Full Metal Jacket.

The actor performs in this film his best, the muscular and powerful mad king of his subconscious.

But he also is touching, making us feel sorry for him, looking at his father’s ruthless and violent harassment.

Clinging to his memory’s inner child innocence, she will try to save him from his own mind’s darkest side.

They take out different genres from the same theme, exploiting their talent and creating great visual and emotional impact scenes.

Instead of an action thriller, The Cell is a psychologically sick fantasy version of The Silence of the Lambs.

A successful experiment led to a large revenue of over $100 million in cinemas worldwide.

And you can believe me: his style has not aged for twenty years now, preserving all its original, imaginative power.

In the near future, in the most difficult cases, the police use some telepaths to interrogate suspected criminals.

Their work is never easy, having to distinguish the real memories from the dreams and desires of the subject.

One of these mind detectives is having a hard time, unable to work after his wife’s death.

The tragic memory always overlaps in the most delicate moments of his investigations, making any result unreliable.

To help him psychologically and financially, his boss gives him a simpler case than usual assaults and murders.

Going to a rich businessman mansion, he must help the young daughter get out of his shell.

Indeed, the girl suffers from nervous anorexia and absolutely refuses to eat.

But entering his mind, the man discovers a past made of secrets and cruelty between his school friends and teachers.

Desiring to help her, she will then begin to seek the truth that the girl even hides from herself.

The deception of dreams and memory

Anna is an Inception Style mystery, perpetually suspended between the teen movie, the fantasy, and the detective investigation.

Seemingly innocent as the protagonists, the film turns on deception and confusion between the memory reality and dreams desire.

Aesthetics is elegant and refined (perhaps even too patinated sometimes) but combines with style the oniric to the real world.

The relationship between them grows from initial distrust and suspicion to an ever deeper empathy for each other’s situations.

Unlike the cold and calculating figures in Christopher Nolan’s film, we have a genuine warmth towards these two characters.

The scenography further increases the feeling of loss and unexpressed sexuality hidden behind the normality facade.

Twists and plot turns are few but strongly shakes the narration, elaborating a waiting mechanism and simple but effective whispering.

Mark Strong plays one of the most complex and interesting characters of his long career as a character actor.

The actor usually plays the few words’ tough guy in films such as the hilarious Kick-Ass or The Guard.

What initially may seem like the classic tormented detective becomes a more multifaceted character and not always necessarily positive.

Indeed, his pain dominates him, crushing by the guilt and mourning for his wife never overcome.

The young and beautiful Taissa Farmiga is equally taciturn and ambiguous on her part.

She, too, at first seems almost the stereotype of the fragile princess prisoner in the castle.

But with their telepathic sessions, his malice and intelligence emerge, conquering the interest and respect of the adult man.

Anna left no trace in the big distribution, paying perhaps the calmest and thoughtful rhythm than Christopher Nolan‘s movies.

Far from the action scenes and the grandeur Inception Style aura, this film tells a smaller and more personal story.

But perhaps also for this, it is more close to our common lives away from secret agents and international cospirations.