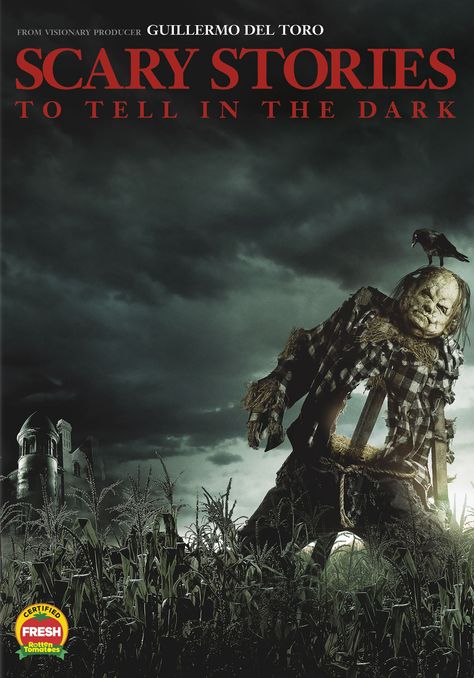 Scary stories to tell in the dark talk about a group of teenagers who, on Halloween night, are running away from some angry, violent bullies.

To hide, they go to an old abandoned house, where once lived a family from the mysterious past.

Exploring the house, they find a manuscript that contains some stories written by the young daughter of the family.

The poor girl was mentally unstable and ended up in an asylum.

One of them takes the book home and immediately observes how the pages begin to fill with blood-red words.

At the same time, the horror stories begin to happen for real, killing anyone who has entered the house.

These fearsome supernatural beings scare the hell out of their victims and then make them disappear without a trace from the face of the earth.

Their only hope of survival at that point is to discover the mysterious past of the storyteller girl.

They begin to investigate the past of the house and family, hunted by ghosts and monsters that continue to appear in the book pages.

The deadly power of imagination

Scary stories to tell in the dark is a mixture of a common teen horror movie and the classic anthology movie into chapters and episodes.

The various monsters evoked by the book each have their own story, genesis and epilogue that unite perfectly around the central plot.

But the main enemy of these boys will be the restless ghost of the daughter who lived in the house.

Exasperated by a family that never wanted and could understand her, she became the monster they accused her of being.

Even worse, once locked up in the asylum his brother doctor tortures her without peace to know the truth’.

So the magnificent gift of imagination becomes a nightmare for her and everyone else.

Nostalgia for the old gone cinema

André Øvredal directs this movie with a classic and impeccable style, obviously looking back to his film training in adolescence.

It is not by chance that, at first, the boys run away into a drive-in where they then admire on screen the magnificent Night of the Living Dead by George Romero.

His style also tells this story by combining the tension and fear of cinema with his love of horror books when he was a teenager.

She is a shy little student, unappreciated by her family, ending up in trouble for a freedom’s night.

In contrast, he’s the immigrant living with small jobs and cheats, barely surviving on the edge of the system.

Together they will face something that comes from the past and swallows its victims without leaving any trace.

All the city and the police don’t want to believe them, until it’s too late and the horror is inevitable.

Scary stories to tell in the dark was a huge commercial success, grossing over $100 million worldwide.

All that proving that the old-gone cinema-style can sell well at today’s box office.

A result that makes me happy, hoping you will also appreciate it if you would see it sooner or later.