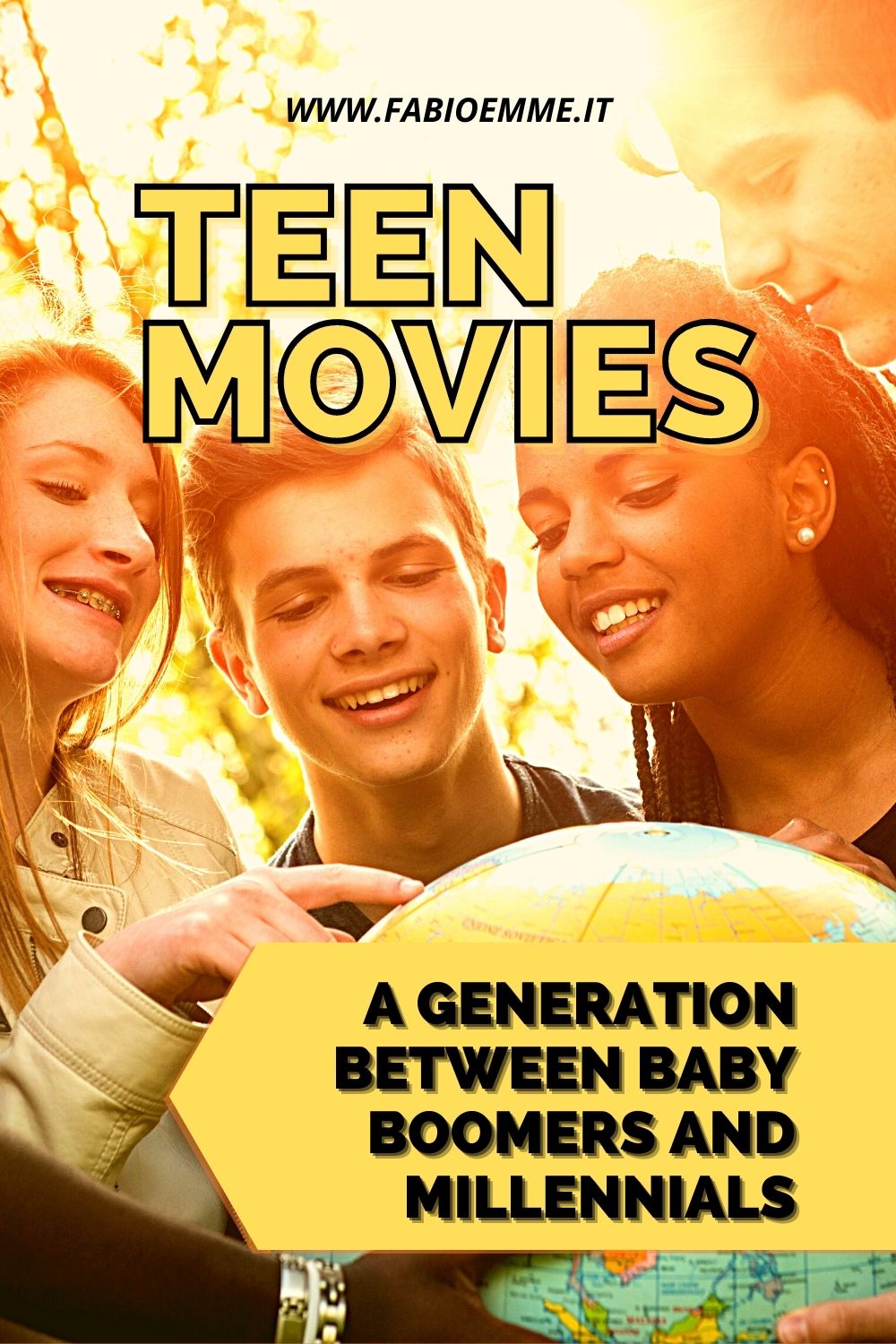 I was a 1978’s Generation X teen movies lover, Wedged halfway between the Boomers and Millennials.

Lucky enough to live that golden age of cinema, it was a kind of style working well still today.

For this reason, it cyclically returns with remakes or other works strongly derivative of that period.

It is no coincidence that one of the most popular Netflix successes of recent years has been Stranger Things.

The series is a clear nostalgic operation to attract 40-year-olds like me.

In addition, even more important, to recruiting among our ranks new levers of the second millennium.

Perhaps more fun than really successful, it is a mix of movies like The Goonies, Explorers, E.T., and so on.

Thereupon, we can at least give credit to rekindle the interest of today’s kids in that glorious period of cinema.

And so let’s keep this interest alive, recommending three movies for my generation of teens who became men today.

Three cults made our hands clap in cinemas around the world, challenging the patience of our daddies.

And believe me, if you are a post boomers becoming parents by now, your millennials children will madly love all these movies.

Two brothers grow up to be the fastest and most dangerous gunslingers in the Wild West.

Years later, they find themselves in a village dominated by violence, where one of them pretends to be the sheriff.

A local gang, in fact, makes it impossible to live in a nearby village of quiet peasants.

Commanded by a ruthless businessman, they intend to evict them to take possession of their land.

The brothers are actually much more interested in stealing horses than in doing justice, but they are forced to intervene.

Accordingly, to don’t attract the attention of the feds marshall, they decide to teach the peasants how to defend themselves.

But these people are extremely religious and categorically reject violence, so they’ve to search for help from two old accomplices.

Altogether, they will stand as their last defense against an entire city of criminal bullies.

The Devil’s right and left hands

They Call Me Trinity is a western comedy full of adventure and irresistible gags that immediately enter everyone’s memory.

Although it is a film devoted to fun, the staging, costumes, and directing are considerable.

The plot immediately pushes us into this strange world of criminals fighting for good by becoming heroes for a day.

With their simple irony and confidence, the two protagonists immediately place among the best characters for teen movies.

Both are so quick to draw the gun that they are nicknamed the two hands of the Devil.

In addition to skilled gunslingers, they are also unbeatable thugs able to fight enemies’ hordes with great grace and humor.

But no one is perfect, and they too have their constant squabbles and quarrels, struggling to endure each other.

The good giant with his sullen gaze and the bright blue-eyed heartbreaker become two Italian and world cinema icons.

Two actors formed long before the millennials, bringing thousands of us post boomers to the movies to have fun with their adventures.

In the shadow of Sergio Leone and Quentin Tarantino

Bud Spencer and Terence Hill were already famous in Italy with a fruitful series of films.

But it is here that they break the border, reaching international success and fame.

The director of this little cult is Enzo Barboni, behind the signature of the pseudonym E.B. Clucher.

Barboni was already widely included in cinema as director of photography for other classics such as Django with Franco Nero.

But from now on, he becomes a full-time director, proposing the nice couple countless other times.

Indeed, They Call Me Trinity was a record revenue for an Italian production. At the time, it places second only to the famous A Fistful of Dollars by Sergio Leone.

A golden moment for my country after the great development era of the boomers, today almost forgotten by millennials.

These movies leading our Cinecittà Rome studios to compete, for a period, with the mega-productions of Hollywood.

The movie immediately become loved and idolized by a host of young people in all the world’s cinemas.

Among them it was a young and talented Quentin Tarantino, great lover of the Spaghetti Western genre.

As an homage, he uses Trinity’s musical theme in his Django remake, where Franco Nero performed in a funny cameo.

In summary, this small comedy has become a worldwide phenomenon, conquering the generations it continues to meet on its way.

We are in World War II times, just after the terrible Japanese attack on the American base of Pearl Harbor.

Los Angeles life continues despite everything, with young soldiers intent on living and having fun with the girls.

But there is also a fear feeling that can lead at any time to uncontrollable mass madness.

When a Japanese submarine that has lost its course approaches the city’s coast, the situation explodes definitively.

Owing to a series of coincidences and the stupidity of some unlikely characters, everyone believes the city is under attack.

Inevitabilmente starts a civil war where everyone fights dragged by the delirium and the military euphoria of the moment.

The army does not help appease the spirits, further exacerbating the tension when the troops line up in the streets.

At that point, they only can wait until the dawn rises soon, bringing lucidity again to the whole population.

1941 is a humorous satire of the spirit of some of the most exalted and warmongering boomers and millennials Americans.

A mockery of the stupidity for men loving weapons and violence, hidden behind the false ideals of peace and freedom.

Indeed, as the famous quote of Kubrick‘s Paths of Glory says: patriotism is the last refuge of a scoundrel.

Combining a passion for destruction with fear of the stranger, this film takes up the concept in a comic key.

This choral experience reunites a platoon of paranoid characters as different from each other as similar in their idiocy.

In one way or another, each of them gives their hilarious contribution to the general madness of the plot.

The pace slowly climbs along with general mental instability, arriving at the euphoric destruction of the whole city.

Finally, this fireworks cabaret takes place in Hollywood, not by chance.

In a word, the excellence cradle of the teen’s movie dream is destroyed and rebuilt by the uncontainable irony.

A young cast of future stars at war

Steven Spielberg realizes one of his most unjustly forgotten and disowned masterpieces.

In addition, he is helped by fellow Robert Zemeckis as the script’s author.

The director of cult such as Back to the Future or Forrest Gump, writes one of his best stories ever.

They attack with sharp humor the military and the Hollywood establishment, ridiculing them like stupid kids.

After the rejection of famous stars like John Wayne, he chooses many unknown actors, then quickly going to success.

Glaring examples are the wonderful Dan Aykroyd and John Belushi, about to explode the following year with The Blues Brothers.

Belushi plays an exceptional crazy aviator, to put at the side of the Animal House‘s crude and irresistible Bluto.

John Candy is an unstoppable tank diver, dispensing pills of wisdom and heroic patriotism as he cannon-fires the city.

Finally, the small role for a young and sexy Nancy Allen is an official with a sexual fetish for airplanes.

1941 is a carousel of characters and situations held together by a wise direction and pacifist anarchist writing.

The film failed dramatically at the box office, failing to cover even the high production costs.

It always needs time to revalue true works of art, especially when it seems initially only another simple teen movie.

So if you get the chance, take a look at it and tell me if I’m wrong.

Because I really think it is one of the most flourishing war movie parodies of all time, good for both boomers and millennials.

A young computer/electronics enthusiast connects to the central computer of NORAD.

Thinking of trying a new video game, he accidentally starts a program that simulates a global thermonuclear war.

But the electronic brain takes the game seriously and begins to send false reports, messages, and invasion alarms.

It tries to convince the military authorities that America is under attack, pushing to bomb the Soviets in retaliation.

Then the control of the nuclear missiles would pass into his hands, and he could finally win the game.

As soon as he finds out what’s going on, the boy immediately tries to warn the NORAD men.

But the military thinks he’s a hacker who infiltrated their network and got him arrested.

After escaping miraculously, along with his friend, he has to track down the crazy computer maker.

Having built it to learning by playing, he is also the only one who has a chance to stop him.

Wargames is a small pacifist jewel of the 80s that perfectly combines the love for boomers cinema and millennials video games.

The various characters, starting from roles perhaps a bit stereotypical, then develop interesting relationships and interactions.

Among the movie there are the various teen nerds, professors, and military, the main protagonist is the clever vintage reels computer.

Indeed, it is not the usual mad artificial intelligence searching for the extermination of the human race.

On the contrary, it is like a child who wants to learn by playing.

Not by chance; it has the name of Joshua, like the dead son of his programmer.

The little kid has an accident with his mother, forcing his father to retire under a false name for pain.

There is still a way to meet and teach the computer the last important lesson on the wargame.

Cyberwar at time of the Saturday Night Fever

In the 80s, the diffusion of computers was still minimal, and mobile phones were heavy bricks used even less.

The concept of telematic security was, therefore, different from the current one.

Today we all have at least one possible target in the house: a computer, a tablet, or a mobile phone.

Wargames then opened the doors to this unknown, dangerous, and mysterious world of hackers.

Matthew Broderick is the young and brave keyboard warrior, giving this term a positive meaning for once.

A boy a bit shy and socially awkward, but a little genius of electronics and computer science.

In short, the classic nerd with which pairs the sweet and beautiful Ally Sheedy.

She plays with fun, the classic sexy school partner we would all like to have at our desks.

After the generational cult Breakfast Club protagonist, she returns in Short Circuit, another film about war, pacifism, and microchips.

Another box-office champion always directed by John Badham, whose excellent Blue Thunder we recommended in the previous article:

Badham’s works always remind me of when I was a teen, with many good movies between the 70s and 90s.

The Colony – Humanity restarts from...