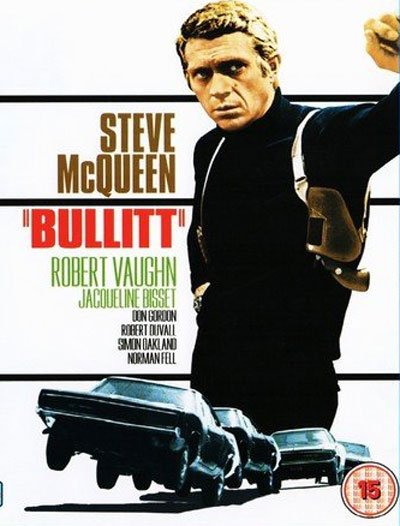 Frank Bullitt is a San Francisco policeman who has to protect the main witness in a criminal gang trial.

To remain anonymous, they move and guard him to a hotel under a false name.

But things go immediately wrong when some criminals burst into the room shooting.

When the policeman arrives on the scene, it is now late: the witness and a young colleague were seriously injured.

A well-known and influential politician, whose career depends on the case, then decides to put all the blame on him.

But something is suspicious with the attack, given the rapidity and ease with which they were discovered despite their precautions.

In addition, the killers again try to murder the witness even when he is in critical conditions at the hospital.

So he decides to deeply investigate against the time and the higher forces that want to lose him the job.

Once upon a time in San Francisco

Bullitt is a classic 1968 crime movie, full of tension and hard, unscrupulous characters.

The policemen only trying to do their job, despite the greatest interests of the politicians of the city.

These men are anxious to reach power and do not hesitate, foolishness, even to obstruct and interfere with the investigation.

The story’s rhythm goes up and down like a carousel, wisely alternating the investigation and spectacular action scenes.

Undoubtedly, the Ford Mustang iconic pursuit is one of the most loved in the history of cinema.

Full speed descending and climbing San Francisco roads, he initially flees from the criminals and then chases them in turn.

Although not being a box office champion, this movie remains undoubtedly one of the highest points of American crime cinematography.

In a word, it’s a film that fully showcased the American spirit without feigned goodness or excessive wickedness.

That is a realistic and believable story, as spectacular and exciting as it is.

Intelligent, calm, and thoughtful, he always reacts promptly with a few jokes and his inimitable look.

An incorruptible and tireless policeman who hunts criminals relentlessly, as in the frantic final chase at the airport.

But he also has his doubts and passions, trying to keep away from his world the inquiring gorgeous girlfriend.

The sexy Jacqueline Bisset plays this role, adding a touch of femininity and delicacy to an otherwise completely masculine story.

Initially irritated because he does not talk about his work, she will change her mind when facing a strangulation victim.

Then she will understand him better, immediately doubting if she wants to continue to be part of his hard life.

Peter Yates probably directs his most famous movie, confirming himself in the following years with the excellent Krull and Suspect.

The great visual research of each frame still pays in quality, managing to remain modern and exciting even today.

Every scene, indeed, is expertly built with style and elegance while managing to be raw and realistic.

Many modern films remake this style, but in Bullitt, it perfectly combines art and entertainment.