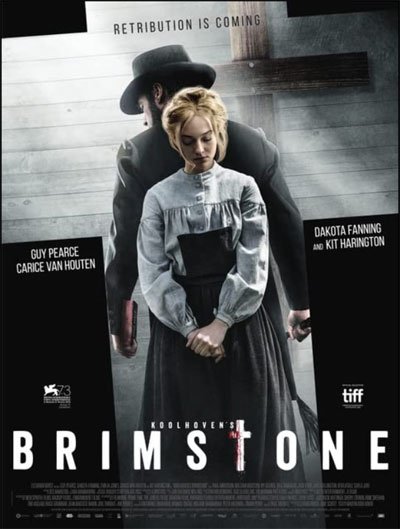 Brimstone is the story of a mute young woman with a small daughter, reserved and eager to live in peace.

Apparently mild and harmless, behind his innocent and clean face, she hides a troubled, tragic past.

Trying to put a thousand miles away from his old world, after unspeakable years of suffering and fear, the woman found the courage to flee.

But fate doesn’t seem to want to help her leave her old life behind, like a hound tirelessly chasing the prey whose blood he has smelled.

In fact, a mad and cruel preacher absolutely wants to find her at any cost, confusing the will of God with his sick perversion.

To settle a long-standing unfinished business, she will have no choice but to fight.

Brimstone is a movie leaving no choice to its protagonists, inevitably destined to meet again.

Fleeing from fear or blinded by anger, all of them are doomed. But even in the midst of despair, there is always room for love and hope.

And although the crazy priest looks like the Devil himself, drunk with the word of God, maybe there can be better days even in the most terrible of stories.

Dakota Fanning interprets a remarkable lonely woman fighting against a world of men trying to enslave her.

Despite everything she has to suffer, she doesn’t give up for her daughter’s sake.

But also, many other people, unfortunately, will end up in the midst of his sad story.

Guy Pearce here in a crueler role than ever, glacial in his fixation with ruining a woman’s life.

A man who lives without joy, obsessed with religion and the woman from whom he felt betrayed and humiliated.

Relentless and unstoppable, he will drag down to hell with him all those who dare to stand in his way.

Martin Koolhoven writes and directs this intriguing and atypical western, dividing the story into chapters chronicled from each other.

Brimstone is a different look at the world of frontier cowboys and gunslingers, described from an unusual female angle.