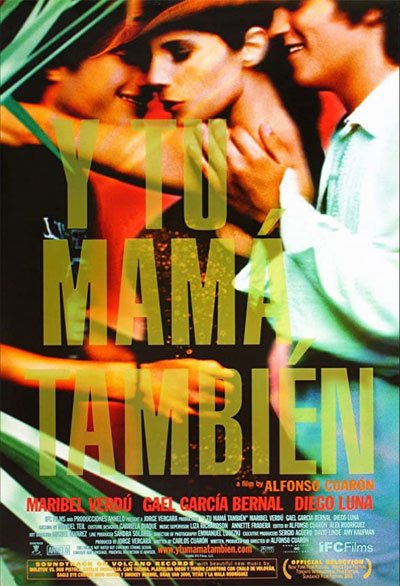 Y tu mamá también is the story of two friends planning a trip to a secluded beach in a remote part of Mexico.

So they wait for the right opportunity to be free, the time comes when their respective girlfriends leave for a trip to Italy.

In addition, a beautiful girl met at a wedding joins them at the last moment.

She is older and is going through a tough time in her life, with her difficult marriage is more in crisis than ever.

The trio then leaves in the car, searching for the mysterious beach they have only heard from a friend.

Initially united, the group has great fun and spends days of grace together, passing from village to village along the endless Mexican roads.

But when the girl shows sexual interest first towards one and then both friends, everything gets complicated immediately.

The dispute is then only the trigger to bring to the surface old rivalries and betrayals that the two did not know and hurt each other.

But in the end, it will be the very girl who divided them to reunite them again in their friendship.

The joy and freedom of youth

Y tu mamá también is a romantic and fun on the road apology on innocence, freedom, and youthful unscrupulousness.

Indeed, the trip will be the last opportunity for the two friends to be together before life separates them and they become adults.

It will be an even more important moment for the girl to sum up what she has achieved in her life until then.

The movie is an ecstasy of simplicity and beauty, both in the magnificent Mexican locations and in its protagonists’ spontaneous and credible dialogues.

Right from the start, all three talk naturally about sex without hesitation, shyness, or unnecessary shame.

A subject that often becomes taboo or too much serious is a simple pleasure of life to embrace and experience.

The sex divides the two friends, jealous of each other until the girl does not point of union pacifying the awkward and unpleasant situation.

A travel from Mexico independent movies to Hollywood blockbusters

The magnificent Mexico landscapes and the plot’s emotional freedom are pleasant breaths of fresh air.

Faces that all of us can see everywhere, making everything immediate and credible to our eyes.

Two young people looking for simple fun spending their days without commitment smoking grass and partying with their girlfriends.

Ana López Mercado has gone beyond that period of her life.

Stuck in an unhappy marriage and a job that does not satisfy her, the journey is a second redemption chance.

Initially amused by the advances of the two young people, she then unwittingly takes charge of their education.

By teaching them to be friends beyond the stupid trifles of life, the girl actually helps herself.

For the first time outside marriage, she indulges in the joys of sex without remorse and lives life without plans.

An important lesson that we should follow is if we have the courage to improvise our future day after day.

In essence, without reading the director’s mind or intentions, this is what I think is Y tu mamá también.

The movie was a commercial success, costing less than half a million dollars and grossing over 30 millions worldwide.

Afterward, the resounding echo pushed the director to more expensive and ambitious productions.

They was big Hollywood blockbusters such as Children of Men or the spectacular space survival Gravity.

Unquestionably excellent movies, delightful for everyone with their originality and cinematographic craft.

However, I hope Alfonso Cuarón can someday return to a small project more felt and personal like this.