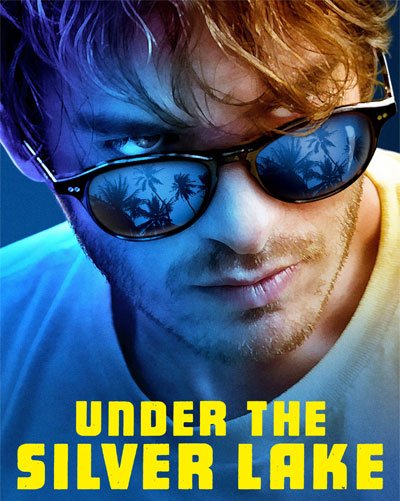 A boy lives alone in an apartment in Los Angeles, spending his lazy days without working.

When a new neighbor arrives next door, he starts flirting, falling in love with her immediately.

But the next day, the girl disappears into thin air, and the authorities don’t seem interested or worried.

Thereupon, he starts a private investigation to find her.

Following a girl retrieving a box of her things, he will cross through extremely diverse social ecosystems.

He finds secret messages and codes hidden in plain sight throughout the city, forming a complicated puzzle to solve.

His journey will take him to a cartoonist writer who created one of his favorite comics, Under the Silver Lake.

The author will inform him of the huge media conspiracy he believes uncovering over the years.

A rich and powerful plan to manipulate the masses through songs and pop culture in order to continue keeping control.

Initially skeptical, slowly, he begins to believe these crazy theories and that his love somehow is part of the conspiracy.

Once upon a time in Los Angeles

Under the Silver Lake is an incredible journey of youth today through the disillusionment and sick romance of modern times.

A mystery charming plot with many original and intriguing ideas, continuously turning in new and unexpected directions.

It is a journey through some of Los Angeles’ iconic landmarks, from the tomb of Alfred Hitchcock to the statue of James Dean.

The protagonist’s search for his love then becomes, to summarize, the quest of an entire generation for a sense and meaning to its existence.

The small, but equally large, important filmography of a new director

David Robert Mitchell‘s direction is really excellent, after the splendid It Follows of 2014.

Only two films with which the director sculpts his name in stone attracting the interest of his young fellow filmmakers.

He can cross genres from horror to romantic comedy without belittling or changing his style.

By describing a contemporary Los Angeles, he resurrects his vintage soul made of classic Hollywood stars.

The protagonist Andrew Garfield is young and cheeky in his carelessness towards everyone except the girl he is seeking.

An unemployed boy who has absolutely no desire to find a job, living disenchanted while others are struggling day after day.

His landlord constantly threatens him with eviction, but that doesn’t bother him at all.

Just as he will not be troubled by the intricate mosaic of deception and conspiracy that he will discover just beneath the surface of his beloved city.

He’s a lovable protagonist full of life, boredom and weakness able to win the audience from the first scenes.

In the final analysis, Under the Silver Lake is an estranging thriller that transports us to a parallel Los Angeles as if it were an alien planet.

A seemingly pointless journey that, believe me, is worth the price of the ticket and will make you love this new emerging director.

Trespass – A Simple Massacre To...