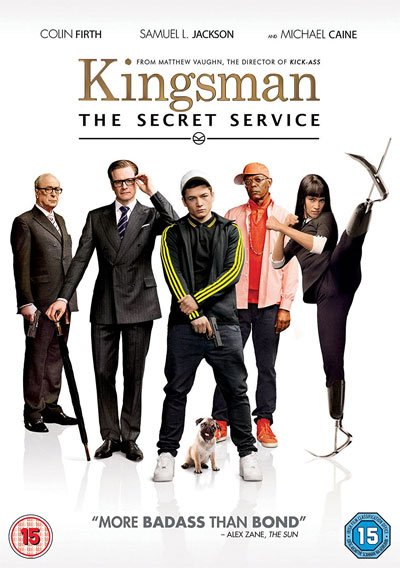 Kingsman: The Secret Service is the story of a difficult boy in trouble with the law and his family.

After the umpteenth arrest, a strange gentleman approach and proposing an unexpected work.

As the son of a former secret service agent killed in action, he has the right to try to join the Kingsman.

Deadly and ruthless as refined and elegant, the group represents the elite at the top of British intelligence.

Concurrently, a rich and eccentric computer genius is plotting with all the world’s leaders.

After releasing its new free telephone technology for everyone, the man intends to use it for a great change.

The secret service having no further information on him, the Kingsmans investigate in the shadows trying to uncover his plans.

Just as the boy completes his training, the final battle will begin between the mysterious fool and the whole world.

When 007 is shaken and stirred with a suburban naughty boy

Kingsman: The Secret Service is an espionage movie full of humor and exciting, spectacular action scenes.

The film is inspired by the famous 007 for its secret agents’ elegance and cool British style but has a soul of its own and does not just copy.

The protagonist, indeed, although Saddened himself harshly, never loses his independent spirit and sympathy as a suburban rebel.

Indeed, it will be precisely these peculiar qualities, unlike to his richest and most spoiled colleagues, to change the course of the history of the Kingsman.

The story has a great rhythm, and carefully chosen musical pieces skillfully emphasize its action scenes.

These scenes are then set with a frantic pace, like the fantastic massacre in a church full of racists exalted and ignorant.

A clear example with a whirlwind and extremely enjoyable fighting and shooting to the rhythm of the famous Free Bird of Lynyrd Skynyrd.

Matthew Vaughn confirms his talent after the 2010’s Kick-Ass great success and his chapter First Class of the X-Men saga.

He builds simple and entertaining adventure stories for everyone, intelligent in writing and intriguing in construction.

His action scenes are frenetic and spectacular moments with some nasty ironic, and unexpected little splatter gore.

As the protagonist of this story, the director wanted Taron Egerton.

A young and energetic actor with the face and right attitude to play the outcast turns into secret agents’ best.

Colin Firth, brilliant and impeccable, is instead his recruiter following his growth like the a surrogate father.

Far from the brilliant comedies like Bridget Jones’s Diary, the actor then performs very ingenious and athletic fighting choreographies.

Finally, as an evil mind that these movies can not miss, we have the always great Samuel L. Jackson.

Humorously joking about Bill Gates and Steve Jobs, he’s a crazy programmer controlling and threatening all the world’s nations.

Kingsman: The Secret Service was a big blockbuster, grossing over $400 million worldwide.

Success led to the following Kingsman: The Golden Circle, with almost the same revenues in 2017.

Waiting for the third chapter, The King’s Man, we hope the Coronavirus situation finally ends and see it in cinemas.

Maybe for its release, we all can live again without hiding beyond masks to get out every day.