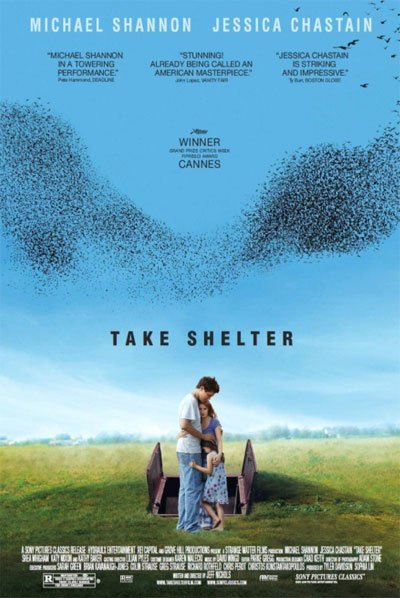 Take Shelter is the story of a man tormented by visions of an impending apocalypse.

The premonition upsets the peace’ of his life with his beautiful wife and his adorable daughter.

Indeed, the man is frightened that a great storm is coming and it will drive all people crazy.

Immediately, he begins to build a small shelter behind his house, preparing to face the catastrophe.

The wife, initially intrigued by his digging, becomes then worried about his growing obsession.

Then he steals a vehicle from his construction site, also losing his job.

In addition, to build shelter, he spends all their money to cure the deafness’ of their daughter.

Despite everyone’s hostility, the man is absolutely determined to complete his project before the storm arrives.

But he can’t help but think about his schizophrenic mother, fearing that it may all come from his imagination.

When the supernatural strikes an ordinary man

Take Shelter is an exciting, tense, and delicate mystery with a small family against something bigger than them.

The movie never overemphasizes the drama, keeping an ordinary everyday low profile routine in which each of us can identify.

The slow descent into the family’s despair follows a credible and human way, touching our deepest emotions.

In the midst of their economic and health problems, the supernatural element slowly creeps up to obliterate everything.

The music fuels the tension in the right moments, always leaving doubt between reality and the protagonist’s possible madness.

The elegant melody marking the most important happenings without ever becoming omnipresent and noisy.

Jeff Nichols makes one of the most important movies of his very appreciable filmography.

The director builds an excellent narrative structure based on the modern world’s difficult reality for American workers.

Men and women struggling when problems come one after the other, sacrificing all for their children’s future well-being.

In this sense, the two protagonists Michael Shannon and Jessica Chastain, give a phenomenal interpretation.

He is a worker who fights with his personal demons, unintentionally dragging his family with him.

Their little money ends up in the man’s project, he being certain that their survival depends on the shelter’s construction.

A certainty that the wife cannot understand and suffers from, despite still loving her husband, but is equally concerned about their child.

A child who has deafness and may have access to new treatments, unfortunately costly.

Their difficulty increased when they were against the rest of the community because her husband lost his job.

At that point, for the family under extreme stress, it will become a countdown.

A long wait before understanding whether the apocalypse is really coming or the man is now irretrievably insane, and their family is over forever.

Take Shelter is a movie virtually unknown to the masses, released only in a few cinemas worldwide.

However, I think it is one of the most important movies of the last 10 years, absolutely to see for those who love slow and reflective stories.

It is a drama that mixes film genres in a unique and inimitable style, close to the life of all of us and our families.

So I hope you have an open and enlightened mind to something new and different, giving a chance to this pearl of rare beauty.