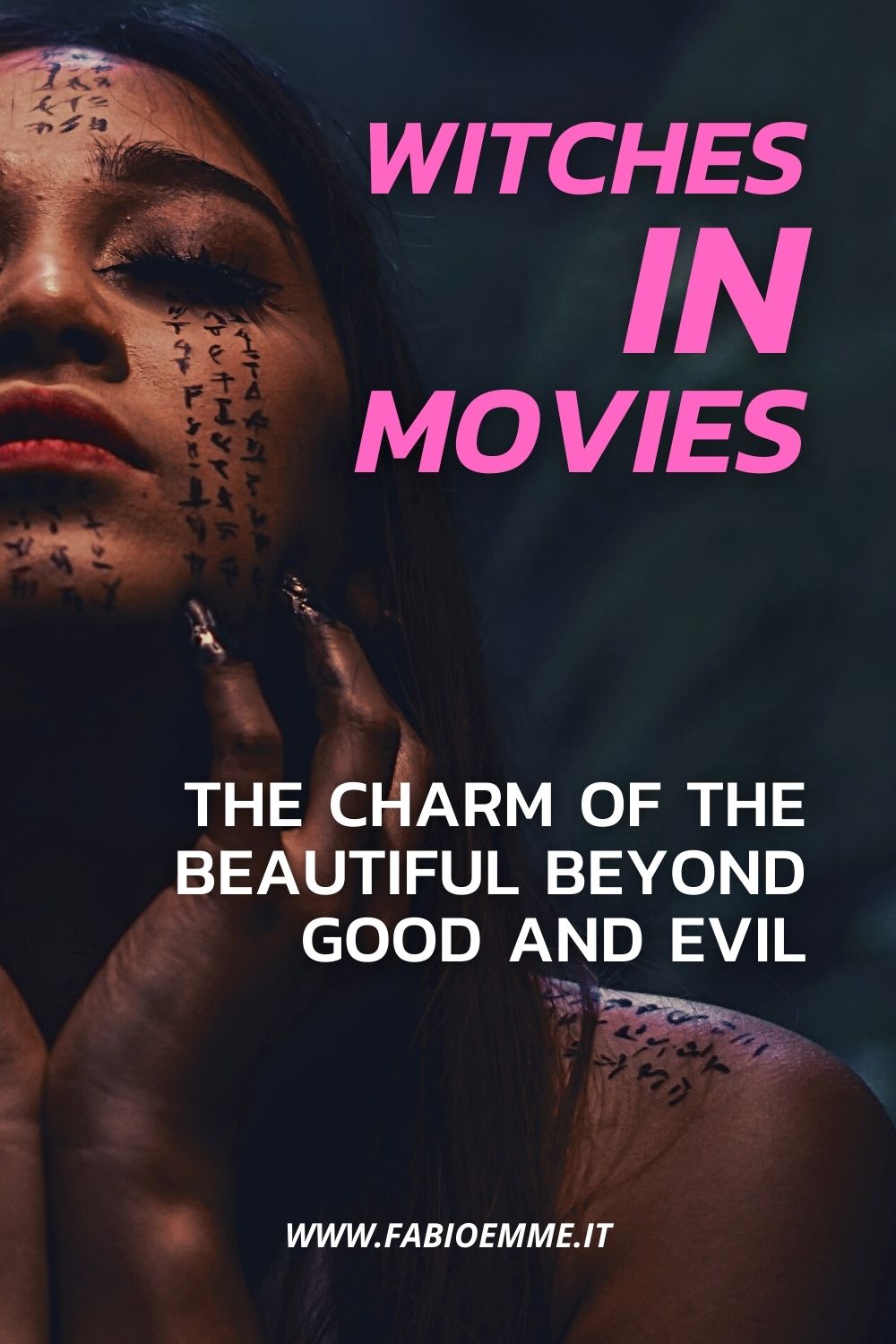 Witches in movies have always been the object of love and hate by viewers.

Fascinating and full of power, their ambiguous nature between good and evil makes them absolute icons of the cinematic landscape.

Their essence directly connects to the earth, animals, and plants against the men’s confused and corrupt society.

Men who, for their part, have always historically committed themselves to stigmatize their figure negatively.

All this then leaving aside the infamous Malleus Maleficarum of the Christian Inquisition.

In reality, their emancipation has often been a sad excuse to hunt and kill thousands of free-thinking women with impunity.

And as always, the cinema in the wide range of its genres could only take full hands-on this topic.

Let’s see together three movies with three young witches struggling to exist and resist in the world of men.

In the middle of the night, police take a young girl’s body to the small local morgue to perform an autopsy.

Indeed, the body was buried near an isolated house and may have the answers to the family massacre that occurred a few hours earlier.

The old doctor in charge enjoys the mystery challenge and asks his young son to stay to help him.

Layer after layer, first examining the outside and then the inside of the body, the two find unequivocal signs of torture.

But despite the girl’s unspeakable suffering, her outward appearance is immaculate and peaceful.

Finding strange ritual signs and symbols under her flesh, they suspect her sadistic inquisitors believing her a witch.

As if that wasn’t enough, the more they advance with the autopsy, the more strange noises and presences begin to infest the morgue.

Very soon, father and son realize they are in a trap.

Since then, to get out of that basement alive, they’ll have to solve the inextricable puzzle of that girl’s death.

CSI with the witch

Autopsy is an original and intriguing film with a scientific investigation into the supernatural world of witches.

The horror and thriller elements are well balanced and balanced, alternating with style the rhythm of the story.

The medical investigation goes alongside the increasing impulses of fear and terror.

The witch (not) protagonist at the plot’s center is always disturbing with her silence and empty eyes.

The evil and pulsating heart of the mystery is, indeed, its naked and helpless body always in plain sight.

Without moving a finger or ever saying a word, her hell of suffering also becomes that of the protagonists.

As it happens to many witches in the movies, the beautiful was actually at the time herself a victim in turn.

Victim of ignorance and religious prejudice, a victim of men envious for its pure and innocent beauty.

And now that she’s the one heaving the upper hand, all the men crossing her path will be in serious pain.

Even with little you can do so much

André Ovredal, already recommended for his excellent Mortal, uses imagination and crafts the few means at his disposal.

The movie works perfectly with an extremely low-budget production with only one location and two leading actors.

Despite entirely set in a basement with three rooms and a corridor, the story stands out in building great tension.

Brian Cox imposes himself on the scene with his usual class, elegance, and undeniable charisma.

His interpretation is, as always, perfect and immediately relating with the medical examiner’s character.

For the first time in his life, his certainties fall miserably in front of something incredible and inexplicable.

At his side, Emile Hirsch in his son’s role. He is a good shoulder to bounce dialogues and keep the attention alive and has his own well-written personality.

Staying after his working hours as a favor, he gives up a night with his loved girlfriend.

Immediately realizing that there is something very wrong with the whole thing, he tries to warn his father.

But his words are worth nothing against the strong curiosity to discover the truth until it is too late.

Finally, a small mention also for the young actress Olwen Kelly, although her trial does not go beyond lying still while the doctors tear her to pieces.

One of the most disturbing and fascinating witches we hope to see again, perhaps in a more active role, soon in some new movie.

A charming and young stranger arrives in Los Angeles searching for fame and glory as a photo model.

Although starting from nothing, its beauty immediately seems to bewitch the agencies and photographers to whom it presents itself.

Thus began a rapid rise to fame and success, along with the growing envy of all her colleagues.

The other models suffer tremendously from her clean and natural charm without needing cosmetic or surgical improvements.

At the same time, her small hotel manager becomes a more dangerous and dark character every day.

Strange and terrifying events continue to follow each other night after night, deeply disturbing the girl’s life.

In addition, her boyfriend seems to detach himself from her as much as her career becomes important.

The naive guy, while loving her, can not compete with the wealth and popularity of the prominent characters around him.

But fate has a brutal reckoning in store for her.

The other women she leaves behind, in fact, want to destroy her and steal the power of her young and candid beauty.

The most powerful witchcraft

Unlike other movies with witches, The Neon Demon does not openly declare anything but leaves much room for this interpretation.

The protagonist climbed magically and easily the idolized peaks and admired her profession’s most cynical and cruel pillars.

She only looks at her supposed masters, and that’s enough to bewitching them to madly and immediately love her.

So she receives what the other models get with strict diets, sacrifices, painful injections, and surgical operations.

Every scene in the film is constructed supernaturally as if these women’s world was something totally alien to our reality.

A war without quarter between these beautiful is fought by force of charm and allure, trying to discourage and induce others to give up.

Anything to get the best place or the most elegant and flashy dress during a parade.

They also compete for the most talented photographers’ attention and favor having the best services on the most prestigious magazines.

Without the need for formulas or complicated magical rituals, their beauty is always the most powerful witchcraft.

A post-modern and visionary horror

Nicolas Winding Refn mix with inestimable talent the vintage style with modern lights and music in his magical cinematic cauldron.

Taking up exaggerated colors of classic Italian horror, the director reinvents them in his mix of slow rhythm, rarefied atmosphere full of electronic techno sound.

Colors like the bright red of blood like Dario Argento and Lucio Fulci or the alien use of light purple, green, and blue as in the films even older than Mario Bava.

The latter then a director of which, we remember, Refn produced the re-edition of Planet of the Vampires, masterpiece forerunner of the legendary Alien by Ridley Scott.

The director wanted the beautiful Elle Fanning for the protagonist role, like many actresses with an actual past as a photo model.

The movie ambiguously leaves to our interpretation whether this is really a story of witches or not.

Just as it leaves us to speculate whether the girl is as naive as she seems or subtly exploits her power.

Is it aware of what it does, or does this emerge as a natural consequence of its beauty?

Finally, we also have an unusual and awful Keanu Reeves as slimy and rude manager of his hotel.

A role that comes out of the box of the usual unbeatable hero John Wick finally let him play more with his actor’s skills.

Kicked out from the community where they lived, a family moves into the surrounding woods trying to run a farm.

Life is difficult without comfort and entertainment, and the father’s oppressive exaltation for religion makes everything even worse.

As if that wasn’t enough, the baby brother mysteriously disappears while he was in the care of his sister.

The tragic event is only the beginning of a slow and inexorable disintegration of the entire family.

Parents and children accuse each other of their mutual misfortunes, turning small misunderstandings into pure hatred and resentment.

But the baby’s disappearance didn’t happen by accident.

Indeed, in the depths of that same forest, hides a coven of witches who have targeted their young daughter.

Wishing to convince her to join them, the witches will mislead the growing wickedness by separating more and more parents from their children.

A black fairy tale in the heart of the forest

The Witch is indisputably one of the most important, evocative, and original horror of the new millennium.

Fear comes first from within the small family, tyrannized by the bigoted ignorance of a master father and an apathetic and submissive mother.

Children grow up in the shadow of their teachings that distort their innocence into something perverse and dull stupid.

In fact, if spirituality and the search for the soul is a noble purpose, the rigid patterns of religious extremism kill its joy by transforming it into death and desolation.

In this sense, the whole story can very well be a very topical metaphor of our world.

A world where the extremism of certain political figures and fringes has struck and will strike again, imposing their petty rules with fear and terror.

And perhaps in this context, the witch who lives in the mood of nature and submits to its brutal laws is not absolute evil but only a reflection of who we are, and we do not want to admit it.

Only two movies for the birth of a myth

Robert Eggers has only two films to his credit but is already an undisputed idol for modern cinema lovers.

A cinema that does not need dazzling special effects or amazing narrative twists and turns.

The director, in fact, nourishes his inspiration from great classics such as the family break-up of The Shining and the expressionist power of a 1920s Nosferatu.

The calculated simplicity of its staging is pure and uncontaminated, direct and effective in delivering the message to its destination.

His characters, then, are the evil reflexes of ordinary people that each of us knows and in which he can recognize himself.

Anya Taylor-Joy confirms all her skill as the protagonist after her magnificent performance in Split by M. Night Shyamalan.

The young actress plays perfectly the role of the daughter, who slowly finds herself alone against her whole family.

A girl who would, understandably, want to be happy and have a shadow of a future to hope for someday.

Overwhelmed by responsibilities and choices others have made for her, and everything carries her straight into the arms of the witches in the heart of the woods.