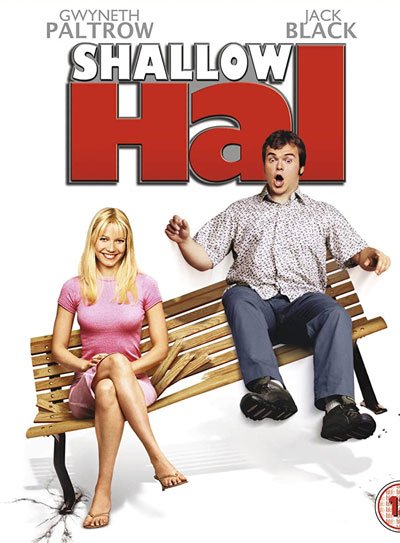 Shallow Hal is the story of a boy stupid and shallow with girls, but deeply with a big heart.

Worrying only about their exterior aspect, he always manages to find flaws for not having a serious relationship.

Until one day, a famous TV show guru gives him a gift through hypnosis.

From that moment on, he will see women for their inner beauty.

Then he starts having adventures with some girls that, otherwise, he even would watch twice.

They are all beautiful to his eyes, looking directly into their souls and spirits.

And without his aesthetic obsession, he finally finds true love in a shy and lonely overweight girl.

But his best friend cannot do it and considers him crazy, worrying about he’s losing his mind.

Indeed, he still doesn’t know about the anti-shallow spell, and neither his new girlfriend does.

Only when they see each other face-to-face will they know if their feelings are true or an illusion.

Appearance is everything… or not?

Shallow Hal is a comedy full of misunderstandings and funny sketches about appearance and substance.

The fun is obviously all in the difference between how the protagonist sees the world in a way far different from others.

Many accused the movie of being cruel and unfair to obese people, but honestly, I’ve always found this controversy ridiculous.

The message of history is clearly the exact opposite and does not insult anyone at all.

We all in the world must have confidence in ourselves, although others tell us not to be beautiful or intelligent enough.

The problem is that an angry spectator maybe couldn’t grasp the humor and ends up hating the movie regardless.

Jack Black is the protagonist and absolute driver of the whole story, initially stupid and, over time, more and more profound in judging other people.

His enormous companion is then seen, through the spell, in the beautiful curves of the sweet and sensitive Gwyneth Paltrow.

The actress plays with candor and sympathy, succeeding in identifying with a girl who feels ugly, alone, and misunderstood.

Shallow Hal is a funny romantic comedy really directed and written by Bobby and Peter Farrelly. Making the most from the cast and the unusual plot, they mix comedy and feelings in the right doses.

A small movie from the early 2000s that perhaps after a long time has been unjustly forgotten and must be rediscovered.