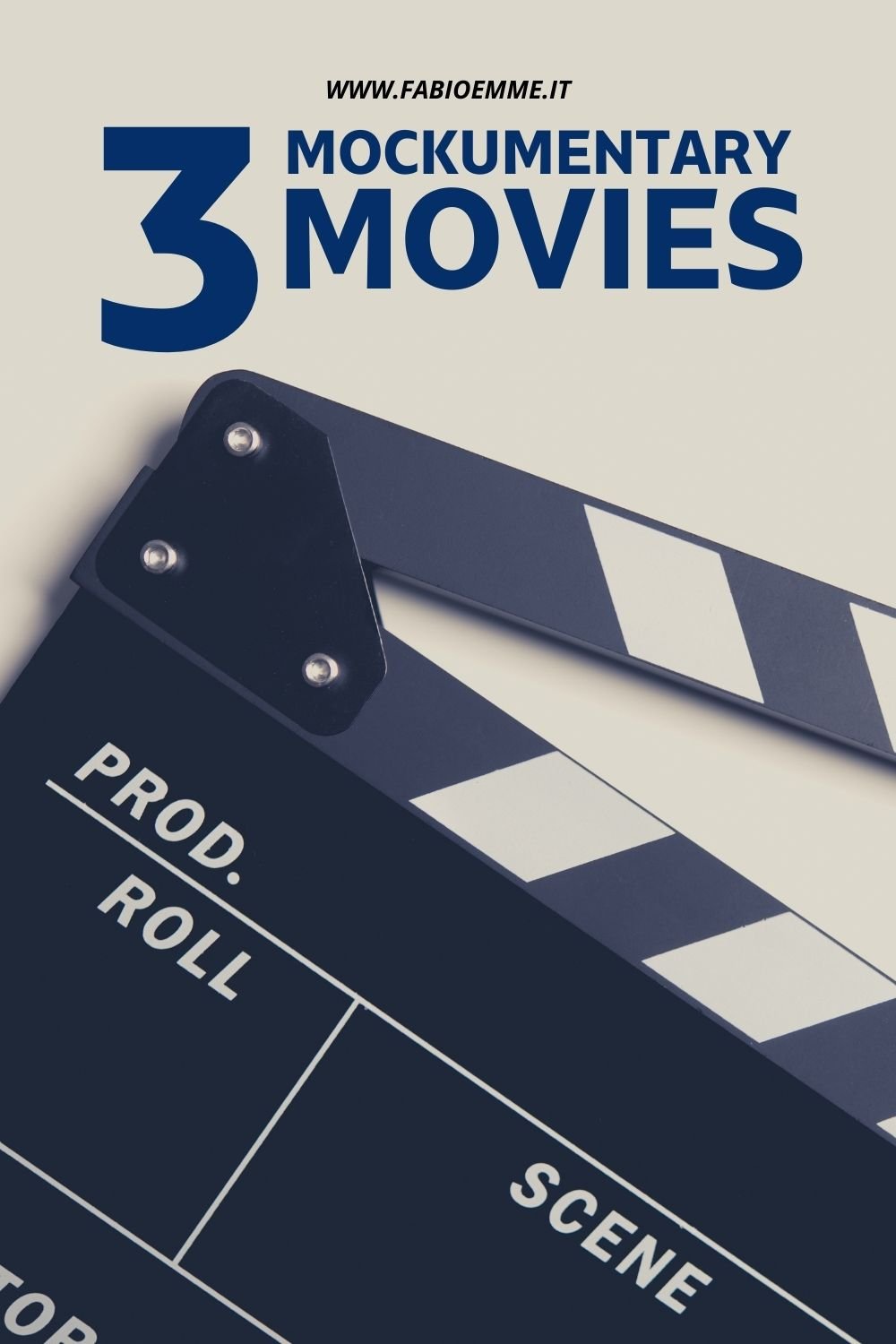 When you say that sometimes life imitates art, you must surely see a Mockumentary Movie to understand a glaring example.

Some spectators sometimes are wary of this cinematic genre, believing it is too difficult and demanding to watch.

Nothing could be more false, in my humble opinion. Indeed, it is a way of creating stories that can easily range through all genres.

We can see, for example, Diary of the Dead by George Romero. It is one of the best Mockumentary Movies ever and funny and intelligent zombie horror.

And so, in turn, in this case, art imitates life that imitates art. A vicious and virtuous cycle that nourishes and strengthening itself at every step.

What could be better than a beautiful fantasy story to tell the big and small truths of our world?

Let’s find out by looking closely at 3 very special and different Mockumentary Movies, each of them brilliant and unmissable in its own way.

District 9 is an intelligent Mockumentary Movie and science fiction parody about the horrible District 6 of the 80s.

It was a ghetto where the South African government locked up thousands of black people during Cape Town segregation.

In this film, however, the prisoners are extraterrestrials whose ship crashes on our planet and unable to return home.

Humans reduce them to miserable conditions. Calling them with contempt Prawns, they’ve to live separated from the population as unwanted outcasts.

Because of the constant protests of the inhabitants of Johannesburg, the entire district must move elsewhere.

When he comes into contact with an unknown substance, an irreversible mutation process occurs in his body.

Under the doctors’ amazed eyes, slowly and inexorably, the man begins to turn into a Prawn.

When the army intends to tear him to pieces to use the alien technologies, he escapes to District 9.

Since then, his fate will be forever linked to that of extraterrestrials, who are planning an escape from that hellhole.

District 9 is one of the best science fiction films of the second millennium.

A piece of work that combines business with art like few others, with action scenes of the highest level and a political/ social context of great impact.

Psychologically, even the impact of the alien arrival on earth is very different from many other genre rivals.

The initial human wonder and curiosity quickly turns into a habit and then oppression and exploitation.

Thus, racial segregation becomes segregation of species, combining human misery and indifference with the most despicable hatred and racism.

Examples of places like this are wasted, from the aforementioned District Six of the 80s to the Russian Gulags for political prisoners, up to the terrible Nazi death camps.

The story’s science-fiction side is no less proposing an original design of creatures and their weapons and exoskeletons war.

The mystery of a director who disappeared from radar

Neill Blomkamp made his directorial debut with this amazing international success.

In fact, by combining the audience’s clamors with those of the critics, this film grosses over $200 million worldwide.

A story strongly desired and linked to the director’s experience and produced by the brilliant colleague Peter Jackson.

District 9 also marks the birth of the partnership with the talented Sharlto Copley.

A versatile, ironic, intelligent, and humanly believable protagonist, the South African actor will also return in Elysium and (in the digital version) in Chappie.

At a certain point, his name is given as certain to direct a reboot of Alien‘s famous saga.

But the project was aborted, and Ridley Scott took over the brand, churning out two great films like Prometheus and Alien Covenant.

Then (and let’s talk about 2015), as one of Alfred Hitchcock’s thrillers’ protagonists, Blomkamp disappears from the scene without leaving a trace.

We only have a few short films about him posted on Youtube on his channel OatsStudio, made with the help of actress friend Sigourney Weaver.

Some rumors give out for 2021 a mysterious film called Demonic, but it is difficult to give anything for sure given the global situation.

Waiting anxiously for the return of this little prodigy director, let’s enjoy District 9, which to date is undoubtedly his best work.

Frost/Nixon allows us to see the exciting realization of one of the most famous Mockumentary Movies in American history.

Years after the scandals and subsequent resignations, Richard Nixon ardently wishes to return to the world of politics.

To restore credibility to the people who hate him, the former president arranges an interview with journalist David Frost.

Actually, Frost was famous as a gossip hunter than a real political talker, and he was at first hesitant.

But the Nixon’s staff convinces him with conspicuous money and the opportunity for once to be serious like his colleagues.

The interview will focus on the four most delicate moments of the President’s life into four recording sessions.

Nixon believes he can easily get his interlocutors and dominate the scene dodging any poisoned questions about his crimes.

But Frost will prove much more skillful and patient, surrounding himself with a staff of highly trained and fierce collaborators.

Four long days on the theme of war, domestic and foreign politics.

When, finally, they reach the crucial point of the documentary in the last session.

On the Watergate scandal, finally, the journalist and the former politician will risk their fate.

From this last confrontation, only one of them will be the winner. And for the other will be the final oblivion of a sordid career.

The eye of the camera don’t forgive or forget

Frost/Nixon is an amazing last word duel between two ambiguous protagonists and, in their way, equally naive and arrogant.

The dialogues are extremely tight and fascinating, despite the already known long-time history topics.

The period’s staging is perfect, and the rhythm is tight and exciting as an action thriller.

The battle, in this case, does not happen with shootings, pursuits, or martial arts.

Every look and moment of silence during the interview has the same pathos of a Western duel.

The small details of their eyes or a tiny drop of sweat on the forehead denote their fear of defeat.

This Mockumentary Movie is exaggeratedly and deliciously verbose to watch.

It is never boring and always effective at reaching the core of the speech.

Ron Howard reaches the more adult peak of his career as a director.

Even though he is a Republican, he digs into a man’s ego and a nation devoured by internal divisions.

Frank Langella plays with great class and conviction as one of the most unanimously hated men in humankind’s history.

The former president is not, in fact, portrayed as a bad one-dimensional character devoted to evil and darkness.

In his omnipotence delirium, we can see even small flashes of the man and his private life suffering and uncertainties.

On the other side of the barricade, Michael Sheen is his perfect counterpart in everything.

The nice journalist is always jovial and smiling at everyone, naively embarking on an enterprise bigger than him.

But thanks to his men’s determination (including the usual great Sam Rockwell), he keeps closing with success his project.

Frost/Nixon contains at best that sense of closure that Americans needed.

It is a definitive period punctuation for one of the darkest and saddest periods of U.S.A. political history.

A human story of which, among other things, the recent Donald Trump has followed sadly and comically the same path.

Overwhelmed by the COVID pandemic since last year, we have all perhaps forgotten the terrible financial crisis of 2007.

An apocalyptic disaster that razed to the ground more than half of the entire world economy.

It makes many unemployed, homeless people never like before, and probably we all still pay the effects today.

But what exactly happened during (and before) those dark years?

How did we get to a calamity that size without anyone noticing?

Indeed, some people had noticed it, as we can see in this funny and desecrating Mockumentary Movie.

In the months leading up to the crisis, some peculiar people from different backgrounds thoroughly studied the real estate market.

They discovered an embarrassing system based on the real estate bonds’ inconsistency compared with the mortgages’ real value.

By analyzing the cold numbers, it was obvious that the bubble’s implosion was inevitable and near.

A greedy game without rules to the spasmodic pursuit of easy gain, the system collapsed on itself suddenly and clamorously.

As our ancestors used to say during the dark days of the Middle Ages, your death is my life.

And never expression was so fitting as for the protagonists of this story.

Characters thinking out of the box and inserted in the world of finance and loved/hated by their colleagues.

By intelligence or sheer luck, they all sense the impending catastrophe before anyone else.

They invested their money in the deal and creating special bonds never seen before, the Credit default swaps.

Insurance coverage that allows all of them, basically, to bet on Tsunami real estate like it was a sportsbook.

A big short that the banking immediately accepts in their stupid and arrogant security of an unshakeable market.

And so, while half population losing their jobs and their homes, these freaky characters earned hundreds of millions of dollars.

Or rather, they try to warn friends, relatives, and acquaintances of a system corrupted from the ground up.

Ignored and mocked, they decide to make the maximum possible profit from a sick game with no healing intention.

The Show Must Go On

Each of these characters is perfectly staged by a simply divine cast.

Above all stands Steve Carell. As an uncontainable financial trader, without any problem, always saying the ugly truth in the face of anyone.

Arrogant, funny, and deeply marked by a family tragedy, he is definitely the most impressive story’s character.

Christian Bale instead is the brilliant mathematician full of tics and personal phobias that first predicts the collapse.

Despite his superiors, he decided to invest his company’s money in this bet.

His colleagues and clients insult and even denounce him. But he resisted without giving up or becoming discouraged, ultimately making everyone over two billion dollars.

With few and simple words, these little moments explain the complicated language used by bankers in simple terms.

A great job of honesty by Adam Mckay, cunningly managing to partially shed light on one of the greatest failures of our modern society.

The director will then try again, alas a bit confusing, with Vice, a ruthless portrait of Dick Cheney‘s career.

The big short indeed is a perfect Mockumentary Movie to bring in all the world schools when they finally reopen.

Crimes And Misdemeanors – The Endless...