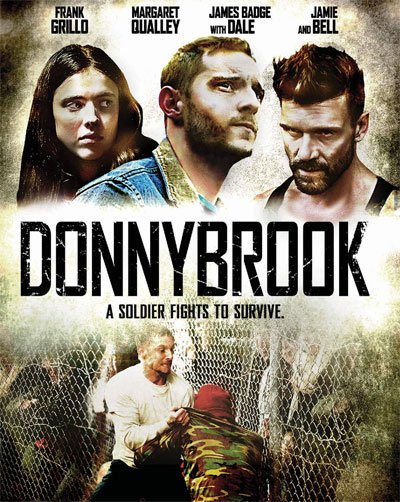 A petty criminal wants to sign up for the Donnybrook to change his life finally.

It is a ruthless clandestine all against all brawl with a $100,000 prize for the only winner.

To raise the money needed to participate, he commits a robbery at a small local store.

The same day he flies away from his pending debts, leaving the city with his wife and children.

But a violent cop investigates the crime and immediately figures out who is responsible.

Ready to do anything to find him, he relentlessly chases them across the country.

Man extorts the truth from all his friends, committing brutal violence and leaving behind a trail of blood.

In addition, a bloodthirsty drug dealer and his psycho sister want their money back.

They, too, begin to chase him everywhere, killing without remorse anyone who gets in their way.

Without a way back, reaching the tournament and winning it becomes his only hope of survival.

Fight is the only way for folks like us.

Donnybrook is a story about a former soldier’s hard fight against a society’s injustice that won’t give him a chance.

Man commits crimes, of course, but deep down, he’s a good guy with no real choice.

The environment where he lives is dirty, poor, and full of wickedness and ignorance.

But in his personal struggle, he also involuntarily involves his family, becoming together fugitives.

His wife and children will also pay the price of his choices, and their fate will be a responsibility that he must accept.

Jamie Bell is the perfect face of the American dream that shatters against the harsh reality of a life with nothing to offer.

His career as a soldier is soon forgotten, and his children will soon be destined to follow in his criminal footsteps.

The man must then risk everything in a crazy race to an impossible challenge, dragging his family into it.

Moving from different countries and cities, history builds a cynical and bad modern American geography during their long journey.

A country of families in difficulty now tired and disillusioned, far from being strong and united altogether.

In this context, the ferocious nature of the Donnybrook, admitting only a single winner, becomes the sublimation of individualism against the collectivity.

When the cruelty reigns supreme

Frank Grillo, as his tireless pursuer, is the perfect protagonist of current reality.

Silent, intelligent and ruthless, this criminal and cruel to everyone without any difference.

His sister, the beautiful and young Margaret Qualley, also suffers the harassment of his brother at war against the whole world.

Constantly abused and humiliated despite remaining faithfully at his side, the girl eventually has enough of the situation and unexpectedly reacts.

It will also be thanks to her, indeed, the soldier can reach the tournament and has a chance of redemption.

Finally, James Badge Dale goes after them all.

The man is a madman with no conscience, just like the criminals he hunts.

But the fact that he has a police badge makes him socially more acceptable and, indeed, even respected and well-liked by his colleagues.

Tim Sutton, in directing, perfectly combines the fate of these characters in a journey into pain, remorse, and anger.

Donnybrook is a social drama that illuminates the lives of outsiders forgotten and unwanted by the system.

Politicians and well-meaning people address their false, politically correct speeches and then forget them a second later.

But the beating heart of America is this kind of people and certainly not the tiny 1% of millionaires who live in luxury.