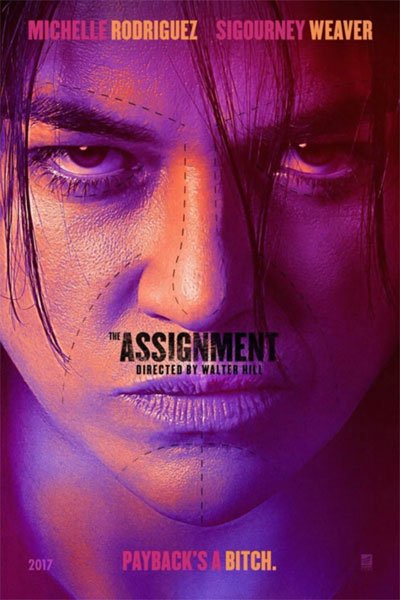 The Assignment begins with a crime boss hires a professional killer to eliminate a man heavily indebted to the underworld.

He does the job perfectly, but the boss betrays and delivers him over to the rich and powerful victim’s sister.

Because of her daring and forbidden experiments, the woman is a former surgeon who now works in hiding.

When his brother’s killer is in her hands, she decides to operate surgery instead of killing him.

Then, he wakes up in a hotel room turned into a woman.

The surgeon lets him know that she has spared him, giving him the opportunity to build a new life.

But, furious at the humiliation and betrayal, he begins patiently to gather information about his executioners.

His goal is simple: one after the other, he intends to eliminate all of them until finally finding the doctor.

But a frame of unscrupulous criminals protect the woman, and getting his way up to her will not be easy.

The Assignment is an action noir where anger and revenge join with the most classic primal of a man-vs-woman fight.

And when the man becomes a woman, he remains the same killer as before and can’t bear what happened.

The action scenes are pure 80’s style, and the criminal setting is accurate with refined and elegant violence.

The rhythm is high, and the narrative is continuous without interruption, starting from the end in flashbacks narrated by the ruthless doctor.

Indeed, she is in a criminal asylum, and, scene after scene, we’ll slowly find out how she end’s up there and what happened with the male/female killer.

The story has absolutely no good guys but only bad criminals, morally ambiguous and perverse without any remorse or conscience.

They are all cruel characters adapting to a world without compassion, where weapons are the only law all unanimously recognize.

In a few words, a tough story of people who don’t use overly gentle methods, each of them in their own way at war with the whole world.

When the gender line disappears into the hate

Michelle Rodriguez is the extraordinary protagonist of this classic metropolitan action.

The actress is fierce, quick, and evil in combat scenes and a beautiful woman with simplicity and naturalness.

We can see her skill especially when she’s masquerading as a man, with a perfectly credible male attitude and movements.

Sigourney Weaver is his arch-enemy, who, after avenging her brother, suffers the protagonist’s revenge in return.

Ahe’s another extraordinary character, silencing and repeatedly ridiculing the doctor trying to interrogate her in the asylum.

She managed to make her way in a world dominated by males, as a respectable doctor before and also as a criminal later.

Two characters on a breathtaking collision path having no intention of surrendering or bending in front of anyone for any reason.

Walter Hill returns to direct after four years from the funny Bullet to the Head with Sylvester Stallone.

A movie that, like The Assignment, unfortunately, was a disappointing commercial flop.

Despite that, he proudly continues to follow his style and build stories around his type of characters he loves so much.

Losers and outsiders of our society, men and women with no place in the world, having to fight every minute of their lives against everything and everyone.

I still consider him an extraordinary director who keeps staging terrific and underrated pieces of art.

For this reason, in the final analysis, I passionately advise you to give a chance to his movies.

You will see that they will not disappoint you, as they are all works of an old master who always has something interesting to tell us.