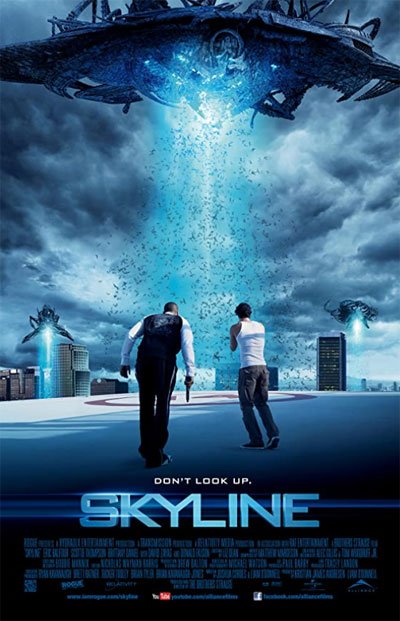 Skyline is the story of a young couple visiting an old friend who now lives in Los Angeles.

Indeed, after years of working in movies, he is now a successful man and lives in the exclusive luxury of a large skyscraper in the city center.

In the middle of the night, however, some mysterious lights come down from the sky.

This light seems to deprive of the will anyone looking at it and then attract and kidnap the victims.

Very soon it becomes clear that the whole planet is under attack from ferocious aliens.

What do they want? Why do they kidnap people?

No one can explain it, and besides, every communication tool doesn’t work anymore everyone can only count on himself.

Quickly, the city became increasingly deserted day after day, under siege without respite from the invaders.

Without any way out, the few survivors take refuge and try to resist waiting for help.

They don’t come in peace

Skyline is a small low budget alien movie with great style and charm, a clever story, and superb special effects.

After a little flashback intro introduces the few essential characters, the story straightaway starts with a great rhythm.

The twists and plot turns are continuous, forcing the protagonists into a trap in the middle of the disaster.

From their luxury apartment, they’re witnessing the rapid demise of humankind, powerless on the fierce attack.

Try to escape or stay and fight?

Both choices seem useless against the power and superior technology of the enemy.

But perhaps, in the end, we can hope that our fundamental humanity is always the best of weapons.

Colin and Greg Strause made this little sci-fi jewel in 2010, immediately obtaining great success of public.

In that case, As a budget, they used their compensation for the special effects work at Battle: Los Angeles, a wannabe blockbuster sadly ended in mediocrity.

Their skill in special effects is undeniable and joins a simple and direct story that works perfectly.

Eric Balfour and Donald Faison play the two protagonists, great friends who grew up together after distance.

When one of them finally became rich and famous, he would like to share his fortune with the other.

But he will have to deal with his girlfriend, played by a beautiful and combative Scottie Thompson.

The girl just found out she’s about to be a mom, and she has no intention of moving to Los Angeles.

But family problems will be short-lived, overshadowed by the larger problems on a planetary scale.

Moreover, the look and bio-mechanical technology of the aliens are exquisite and original.

The evil beings are equipped with weapons, robots, and gigantic spaceships with which they easily devastate the human resistance.

In addition, each of their mediums is equipped with this hypnotic blue light that conditions and drives people to surrender.

To summarize, it is an original plot for the story already seen about an alien invasion, making everything new and interesting.

Skyline is a further confirmation that sometimes, with valid movie workers, it is enough to change some ingredients, and the final recipe becomes surprising.