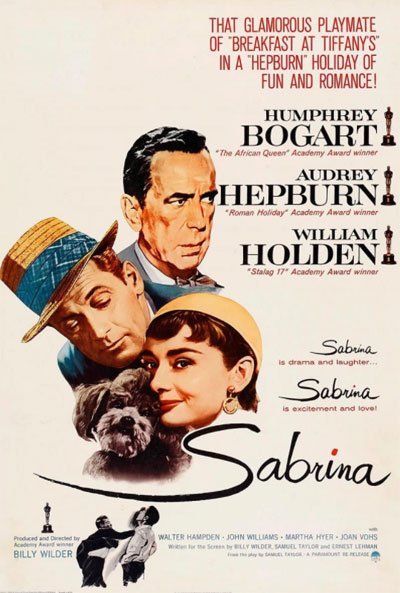 Sabrina is the young daughter of a humble driver, working for a rich and powerful family.

She madly love the youngest son of their employers, a troubled and bored slacker womanizer.

When she knows that he is about to marry another girl, she immediately tries to commit suicide.

But luckily, the other wiser and older son intervene in time to stop her.

Her father decided to send her to Paris to study at a prestigious cooking school.

Upon her return, she will be another person, becoming a charming woman with refined and elegant manners.

Thanks to this change, she hopes to finally make the capricious boy fall in love as before she could not.

But the older brother does not want she ruin his uncertain engagement.

Indeed, the junction with another rich family would ensure a big corporate merger he’s dealing with.

So he decides to distract the girl until the marriage and distancing her from the brother, lying in bed for a comic accident.

But as he spent time with her, the stern businessman discovers feelings that he thought were not his own.

In love we trust

Sabrina is a timeless romantic comedy about love winning universally over the poor as well as the rich.

Its strength and simplicity are as pure and powerful today as they were in the 1950s.

The hilarious dialogues between the characters are the most studied example of classical comedy.

Equally as perfect as is the timing and the rhythm of the narrative.

The time flies away pleasantly for nearly two hours of the duration, introducing situations and characters like infallible clockwork.

In addition, all this is inserted in a black and white frame of rare beauty and elegance with its magnificent sets and period costumes.

Recipe for an immortal masterpiece

Audrey Hepburn plays one of the most loved and remembered Cinderella in the cinema’s history.

Its transformation is literally incredible and a joy for the eyes to look at.

As a naive, clumsy little girl in love, she becomes a gorgeous woman with impeccable taste and manners.

Her family and her father help and support her by always staying close to her in difficulty.

Despite that, they don’t believe in socially possible love between the rich masters and their servants.

The rich scion played by William Holden is indeed too capricious and fickle.

He thinks only of his amusement and does not seem to want to engage in the long term with a woman.

Of course, that gives his older brother a continuous headache, with an extraordinary and inimitable Humphrey Bogart.

Therefore, to avoid the temptation, he decides to keep out of his reach the beautiful girl just back in town.

Man has devoted his life to business and made the family business prosper, totally renouncing a personal and sentimental life.

But his heart slowly begins to beat again in the company of the young girl.

With his usual and versatile talent for all cinema genres, Billy Wilder directs one of the most famous comedies of all time.

Sabrina is still the most famous and loved movie with Audrey Hepburn, alongside Blake Edwards‘s Breakfast at Tiffany’s.