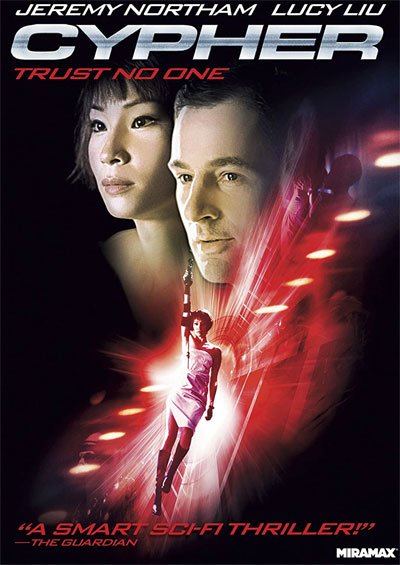 An anonymous employee lives his life without joy and without purpose as a mere cypher in his company accounts.

Consequently, when asked to do industrial espionage, he accepts the proposal with enthusiasm.

Forthwith he begins to travel under a false name, secretly recording meetings of a large rival company.

The encounter with a beautiful and mysterious stranger will immediately change everything.

Helping in her work will make him understand that he is a pawn in a much greater deception.

Spied on, deceived, and exploited by both his employers, he will have to play by his own rules in order to get out alive.

Cypher is an intriguing and original sci-fi thriller, full of twists and turns of roles.

Like a modern noir, it is set in a world where as a matter of fact, everyone is a soldier for the large corporations.

In the background of an endless war of betrayals and thefts, good and evil no longer exist.

Jeremy Northam is truly exceptional as a protagonist.

Going from a dissatisfied common man to being the hub of an international vortex of theft and deception.

Between these enemy corporations, Lucy Liu plays an amazing and mysterious femme fatale.

She’s always beautiful, intelligent, and with a friend / foe attitude until the last moments of history.

Directed by the great Vincenzo Natali, once very famous but today a little forgotten.

By the way, his famous Cube is another little cult sci-fi mystery with many fans remember it through the years.

Even this story immediately electrifying the viewer with its ideas, the spies ambience and the fantastic realization.

The few actors all leave their mark in roles always poised between good and evil.

This movie, unjustly, did not have the success and deserved international distribution.

Cypher is a jem from the early 2000s, absolutely to be rediscovered and loved.

3 Movies to Watch at Night