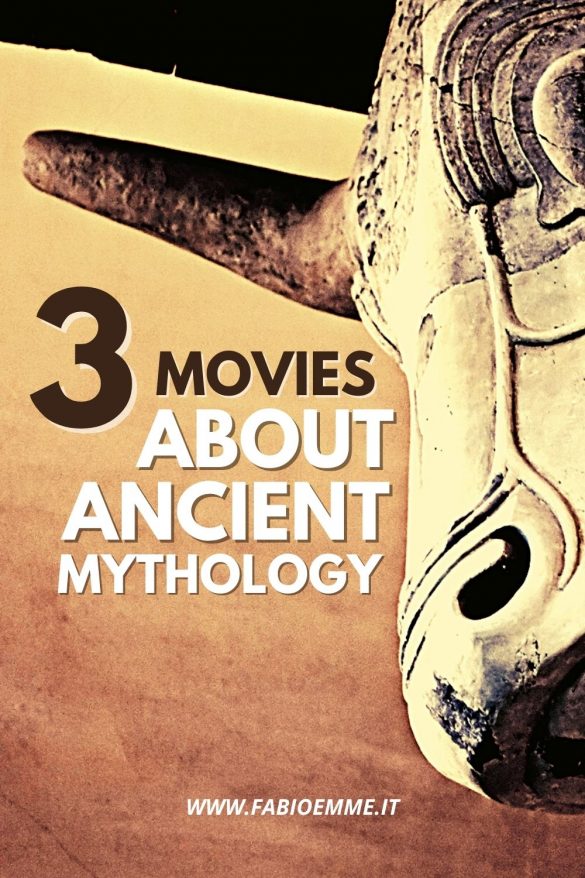 From ancient creatures can be born movies that create a new and exciting modern mythology.

The narrative’s symbols and depths remain those, but we can appreciate them from another angle and moved to a different reality.

Can we say that, for example, a character like the super-hero Hulk is a middle ground between Hercules and Dr. Jekyll and Mr. Hyde?

Do Spider-Man and Batman follow the myths of other humans/beast creatures like the Minotaur, the sirens, or the ancient Egyptian Sphinx?

This may sound crazy, but I want us all to think together, traveling from the past to our present.

By appreciating these stories of our various civilized cultures passed down in our cinemas in the form of superheroes, do we make them stupider?

In reality, much more banally, everything evolves and changes, and so our way of thinking must also do.

And here for the occasion are three suitable movies to think and entertain at the same time.

Mortal is the story of an American citizen wandering the Norway woods for months, avoiding contact with other people.

One day he meets a group of local boys who mock him and attack him.

He had to fight back and kill one of them to defend himself, almost without touching him.

Immediately arrested and imprisoned, a psychologist then arrives to question him.

Trying to describe what happened, he reveals unexplainable supernatural abilities.

These powers are completely out of his control and set fire to the police station.

When the American authorities come to expatriate him, they sedate him and transport him in a helicopter.

But the man manages to escape and goes in search of the psychologist, who seems to be the only one able to placate him when his power explodes.

The two begin a long journey searching for his mythological origins while the authorities hunt them as terrorists.

A god’s son into a man’s body

Mortal is an excellent movie with an unstoppable protagonist from ancient mythology and the authorities’ impotent to catch him in front of his frightening power.

The first part of the film is intriguing and mysterious, dedicated to the discovery of his origins.

All men openly line up against him in an uncertain and fearful atmosphere, except the kind and friendly psychologist.

The second half is more classic with fight action scenes, although the excellent ending varies from the usual superhero canons.

Even if his strength and control of the elements seem infinite, his human side will be his weakness where the authorities will try to hit him.

Nat Wolff is the protagonist of this fantasy adventure, and the unknown face of the actor helps the credibility of the film.

His character is more believable and human than crushing history under the personality of a star.

Even the constant growth of its power comes gradually and without improbable excesses of special effects.

He’s almost unconscious and equally frightened, unleashing his fury only as a defense when the others attack him.

Men initially fear and try to subdue it, unable to accept reality despite the destructive evidence of his power.

But when some of them figure out who it really is, they’re going to try to think about how to use it for their own ends.

Iben Akerlie is the gentle and sensitive psychologist who will accompany him in his research.

The young woman overcomes a terrible personal tragedy and will see in the boy an opportunity to redeem herself.

Her psychology knowledge will also help him increase control of his power, avoiding accidental tragedies.

But the police and soldiers led by the American Priyanka Bose will ruin it all by not giving peace to the boy even a moment.

The government woman, by the way, is not just some stereotypical bad-written character.

In fact, she is the first who realizes his true potential and that it will be impossible to stop him.

André Ävredal straightaway confirms to have great talent after his intriguing Trollhunter, Autopsy, and Scary Stories to Tell in the Dark.

The director skillfully combines special effects and modern editing, also with a classic direction to build the story’s tension and pathos.

The mythology grows exponentially with the rhythm of the story, increasingly excited and uncontrollable with the protagonist’s awareness.

Mortal is a movie with style and personality, without becoming a full action like the X-Men or The Avengers movies.

Of course, this is also due to a considerably lower budget, but we often come up with better ideas in economic constraints.

Ultimately, I recommend this mythology movie to those who like superheroes and the beautiful, ancient adventurous fantasy stories rich in a magnificent atmosphere.

A woman lives in her small Jewish community, suffering from her little son’s death years before.

His little village’s calm is suddenly upset when a group of men burst in violently during a wedding.

Their leader blames all of them for bringing the plague into the country and demands that they heal his dying daughter.

But the girl’s condition is too serious, and the community’ prepares for tremendous revenge, waiting for her inevitable death.

The woman is desperate and uses a ritual to evoke a Jewish Cabala’s mythological creature to save everyone: The Golem.

The evocation succeeds but has terrible and unexpected consequences.

Indeed, the creature is reborn with his beloved son’s appearance, immediately sowing terror among their enemies.

Initially, she’s glad to have back her child and brought a fearsome protector to defend all village’s people.

But she soon realizes that creating an unstoppable murderous monster inextricably linked to his deepest emotions and urges.

Revenge is never a good deal

The Golem is a pleasant horror fantasy that combines ancient magic and religious mythology into a small and fascinating family tragedy movie.

The past times and the protagonists’ uses and customs make a realistic religious community strict world.

It was when women were not yet any equal rights and absolutely no access to culture like men.

Their only roles are to be caretakers and mothers of the family, accepting it without protesting.

But when the monster obeys only the protagonist, the woman becomes the most important village figure.

But his power is precarious, and the monster will become far more dangerous than the invaders.

Hani Furstenberg plays a strong and weak character at the same time.

The protagonist summons the monster to protect and avenge her people, but the cure turns out to be much worse than the disease.

When it is then obvious to everyone that the child is a deadly threat, she is in denial and does not want to lose her child again.

In addition, the behaviour of the community and her husband does not help her at all.

Ishai Golan, in the role of his partner, initially seems to understand her motivations.

Like the others, he is afraid to fight the enemy, letting the abuses push the woman’s anger seeking revenge.

Once she summons the monster, the terrified man has to face the son he thought gone so many years ago.

Special mention also for Kirill Chernyakov, the monster feared by all and loved and hated by the woman.

The little actor is disturbing silent and with the gaze of a supernatural homicidal creature.

When hatred comes from love and ends in blood

The story is well written and its protagonists are never entirely good or bad.

Initially driven by brutal invaders and their ignorance, the married couple then falls into the trap of their own desires and fears.

Finally, if you’ll forgive me for personal reading, we can say that perhaps the only innocent creature in its own way is the Golem.

Indeed, he is a being created for a purpose and pursues it without hesitation and without responsibility.

The monster is, in fact, the greatest victim of men, being born and dying with the same apathetic and indifferent gaze.

The caretaker of an apartment building receives numerous protests for strange warnings in the center common pool.

Constantly surveilling the place, one night, he finally sees an unknown girl emerge from the water.

She takes refuge in his apartment and tells him that an invisible and evil creature hunts her.

In addition, she claims to have the mission to seek and help a particular man who lives nearby.

The man is initially skeptical but slowly begins to believe that, in reality, she is a creature of an old Eastern legend.

A particular water nymph that helps men, in certain particular moments of history, as a source of trust and inspiration.

But the being hunting her repeatedly tries to kill her, and the man will search among his roommates a group of brave to help her.

An ancient legend in modern times

Lady in the Water is a sweet and romantic fairy tale with delightful fantasy and horror shades.

The story is slowly revealed moment after moment and character after character.

The movie’s mythology is focused on predestination and also the ancient search for everyone’s place in the world.

In this small world, in the foreground so familiar and so close to our daily reality, the supernatural bursts into everyone’s life without warning.

The entire building residents will be involved in the adventure of the sweet nymph of the pool, enchanted by her candid beauty and innocence.

In addition, each of them has a predestined role in the historical legend that comes from the Far East to the United States.

M. Night Shyamalan confirms all his love for the classic style of ancient legends and their characters’ archetypes.

The protagonist Paul Giamatti is the suffering hero who lives abandoned and silent his tragic condition.

In fact, while he is constantly in the company of people who seek him for his help, man is inexorably lost and alone.

Only when he finds the magical and beautiful Bryce Dallas Howard does he start living again.

In the aquatic creature’s purpose, he finds his own purpose, helping her fulfill her mission to return home finally.

The creature reads in his thoughts and sees his pain, finally helping him to open up and talk about what he has been silent for so long.

Finally, the role that Shyamalan, as usual, reserves to himself is practically perfect.

The director plays a writer who can not continue his work, as if a sinister spell blocked him.

A spell that only the beautiful creature can ‘undo as the muse’s incarnation inspired by ancient mythology.

Lady in the Water was poorly understood and poorly received by the public, soon becoming a commercial failure.

Worse still, it was added to the Razzie Awards that year as a final penance.

It was such an unjust fate that I personally want to deny, advising you to give it a chance to amaze you with its magic and imagination.