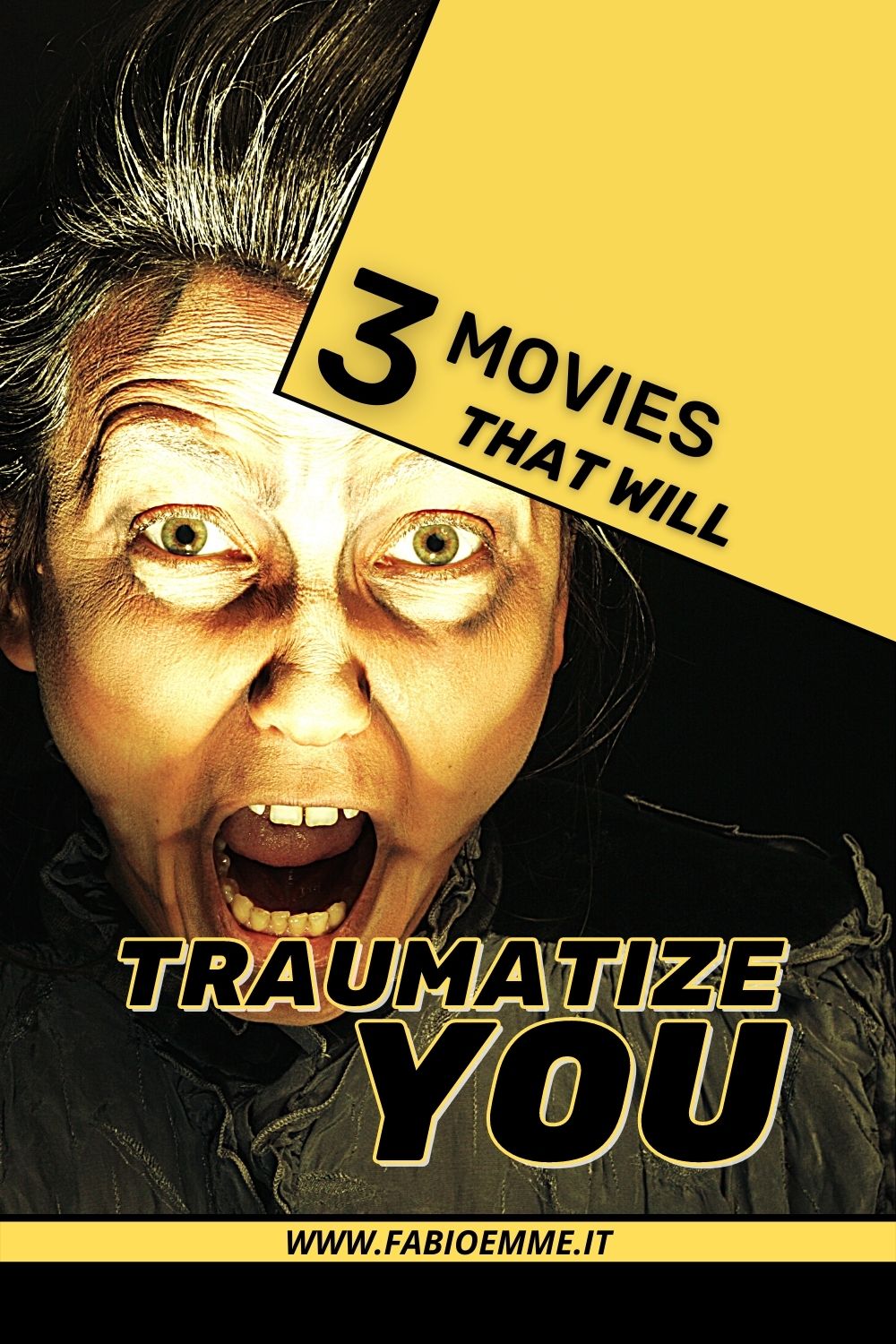 Let’s get it out of the way: today, we’re talking about some movies that will traumatize you, so let’s put a nice ban on minors implied right away.

Activate the parental control, lock the locks on the keyboard, or cover your children’s eyes, saving them a nice emotional trauma youth.

This is one of those kinds of films that have never been half-measures.

Widely discouraged to the faint of heart or stomach, very simply or you love it, or you hate it.

This tension is unbearable, let’s hope it lasts

But there are many different ways to traumatize even in making blood juice movies.

Those who resort to malice for its own sake have nothing to say, and nothing leaves you at the end credits.

On the other hand, others can dare and communicate something with one of the film genres that most offer the possibility of visually showing.

Moreover, before arriving at the blood and horror, the terror and unbearable tension precede it.

Maybe we horror fans are sick, who knows, maybe we like to suffer.

So let’s all get hurt together and enjoy everyone.

Martyrs begin with a young girl being kidnapped and tortured by a sect of religious psychopaths.

Miraculously, she manages to escape. But later, she absolutely does not want to talk about what happened to her once rescued in the hospital.

Once she grows up, the memories (and not only) will come back to torment her. Unable to live normally, she has to go in search of her torturers.

Indeed, along with her, there were also other victims. So the remorse of guilt about she can’t (or won’t?) to help them continue to anguish her.

Together with an old friend met in the hospital after the incident, she investigates the few clues she can remember.

Initially groping in the dark, they will then come to discover a cult of the soul.

They are a bunch of madmen searching for the absolute truth about life beyond death.

Even though the grave danger, the girl firmly has to make them pay for her unspeakable childhood sufferings.

Watch out for the deceitful appearance

Martyrs is one of the most violent horrors I’ve ever seen, an hour and forty minutes of an emotionally traumatizing movie.

But the world is full of torture stories, and it is not why it strongly distinguish from the mass.

At first glance, it is easy to exchange it for the usual characters torn to pieces from the usual psychopaths.

But its plot is much deeper, varied, and unusually motivated than the canons of the genre.

Therefore, you must always be careful to trivialize so easily, especially with a horror shock so visually red blood impact.

Morjana Alaoui and her friend Mylène Jampanoï are two credible and innocent traumatized movie girls in a relentless pursuit of truth.

Though weak and defenseless against the sadistic wickedness of their torturers, they are far from the usual screaming victim’s stereotype.

Simply frightening is the elderly Catherine Bégin in the ruthless Mademoiselle’s role, head and spiritual leader of religious lunatics.

Indeed, this cult kidnaps and tortures almost to death with the eager hope of finding out what is beyond life.

The director Pascal Laugier combines a tense and fascinating film reconstructing the horror genre from scratch with violent classical and modern impulses.

A work of great research mixes the cult aesthetics of the genre as the Italian Dario Argento or the great, irrational, and imaginative Hellraiser.

Its purpose is to stop and start again, transforming terror into horror without distorting it, telling a story more by showing than words.

Indeed, we can say that mainly Laugier wants to deeply disturb the viewer without ruffling it, leaving him uncomfortable and disheartened all the time.

He confirms the sublimation of the genre and its evolution with his next traumatizing movies.

Great stories such as The Tall Man and Incident in a Ghostland being so different that they seem almost directed by another person.

But, at the same time, the hand of the author weighs and is seen, as well as its transformation and mutation continue in the horror genre from the most violent films to the most reflective and cerebral.

Research that I also invite the audience to broaden: don’t stop at the safety of a type of film you liked, but always try new things.

Maybe you will be disappointed by some title that will not do for you, but surely it is never wasted time.

A man becomes a serial killer after a long life full of small follies since childhood.

Perhaps he was the victim of an emotional trauma, but it will always be unknown to us.

As a result of a first almost accidental unplanned murder, his thirst for blood became increasingly clear and compelling.

Dialoguing with a mysterious off-stage interlocutor, fiercely critical of his murderous act, he confesses the daily slaughter of his madness.

However, he tries strictly to join his murders with his love for art and architecture.

Following his own style and aesthetic taste, he transforms an old freezer into his personal museum of horrors.

The madman always manages to get by, sometimes for wit and other luck, for twelve long years.

A time when man will reap countless victims in the spasmodic aesthetic search for his criminal perfection.

Research with an unsuspected conclusion, finally managing to combine blood, art, and architecture in his last incredible act of aberration.

Inhuman humor and the art of blood

The House That Jack Built is a lucid and gruesome portrait of the daily folly of an atypical serial killer.

Over the years, we have admired other implacable death machines played by great actors, also managed by extraordinary directors.

Violent murders like the cannibal psychiatrist Hannibal Lecter or the most ordinary sociopath of Henry: Portrait of a Serial Killer.

But let’s go even higher for a movie with no desire to entertain, ever, traumatizing us until the end.

His bloodthirsty intentions go together with his intention to build a house for at least a semblance of normal life.

A project that however, eternally dissatisfied, ends up building and demolishing continuously.

His house will never see the light, seeking endless that unattainable perfection as well as in his brutal senseless murders.

Like Virgil in this divine horror-comedy, Bruno Ganz has equally scratchy, sharp, and inhuman humor.

Like a judge and mentor of his actions, deriding and debasing his efforts, he drives him to the ultimate massacre.

To the shameless pillory

It was a disproportionate reaction to an unhappy joke about a Jewish colleague of the director (also a Jew) who obviously pulled behind the usual follow-up of social-reactions.

Speaking of other things, finally, I would like to mention the small but essential role of a great Uma Thurman for a sarcastic horror scene and almost non-sense.

The woman with the car broken down kicks off the grim show, becoming the first in the long series of victims of the long trail of blood up to the credits.

She is a character with whom we do not sympathize: superb, arrogant, and unpleasant, making the protagonist as uncomfortable as the viewer.

A cold and aseptic incipit that does not look for solutions to effect, in which the roles of victim/ executioner of the usual plot from serial killer seem almost overturned.

A 10-minute micro-film that, almost disconnected from the rest, is a perfect answer in itself to the banal and ridiculous respectability that hides the real monsters of our society.

A girl goes to a friend’s house to spend the weekend with her and her family.

The place is isolated and quiet, and everything bodes a couple of relaxing and peaceful days.

But in the middle of the night, a violent maniac suddenly bursts through the front door.

While the two friends sleep quietly in their beds, he massacres the whole family and kidnaps them.

Despite being locked in the back of her dodgy van, one of them breaks free and manages to escape.

Alone in the dark of the night and unable to contact anyone, she is the only hope for her friend.

This is just the beginning of a long night of insanity in a desperate attempt to save your friend.

When they arrive at the inevitable face to face, the final truth will be even more disconcerting and unbearable.

Slashing off without so many compliments

After two titles with atypical visual and narrative research, we now move to a simple and excellent old-fashioned slasher.

It is a carnage game with the bad wolf inflaming, without reason and explanation, the two lost red riding hoods.

The scenes of (high) tension built with the appropriate times to hard visual impact violence, bloody, concise, and effective.

The murders are brutal also for the great Giannetto De Rossi, master of the film makeup industry.

While poorly plot and dialogue, the story also reserves a couple of twists of considerable effectiveness.

Ultimately, the story will not win the Academy Award of fantasy or originality, let’s face it.

But it is still a dirty traumatizing movie with violent murders brought on stage without so many filters or compliments.

In this case, we’re talking about a small production. But it became viral for a short time, making good money worldwide for its brutality and a bit of luck.

Specifically, then, it was mostly luck and conviction for director Alexandre Aja.

The young class of 78, in fact, then landed in Hollywood in search of glory, but it is just a couple of movies of little importance (although funny in their own way) as Reflections of fear and Piranha 3D.

Finally, Philippe Nahon is perfect in the dark psychopathic killer’s role with inscrutable (at least until the end) motivations.

Built as a long, all-night chase, the film perfectly achieves the simple but clear goals it sets.

The scenes live on perfectly constructed anxiety waiting for the next senseless explosion of violence, working great on both fronts before and after the horror moments.

It’s probably the most obvious title of this small catalog, but still a delightful little evil cult to be seen strictly alone at night for the greatest possible traumatic effect.