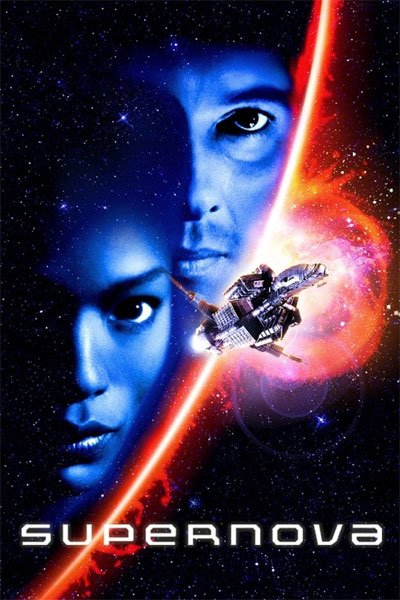 Supernova is the story of a technologically advanced rescue spaceship with a crew of very different talents.

The last addition to the group is a co-pilot back on duty after a long drug addiction period.

Life goes quietly on board until they receive a distress signal from an abandoned mine in space.

But the dimensional jump to the distant system ends wrong, and the ship’s captain tragically dies.

The newcomer pilot then takes command and leads the group to the mine, where they find only one survivor.

The ship’s doctor, shocked, recognizes the man as an old partner with whom, years before, she broke up a terrible relationship.

Besides, the survivor hides to them an unknown artifact he found in the mine.

The extraordinary object has prodigious features, and it can alter human DNA and matter.

Quickly onboard begin a struggle to survive, where everyone tries to repair the spaceship before falling into a star.

At once, the mysterious host will attempt to harness the artifact’s power to get control and escape.

But first, he will have to get rid of the crew, being all uncomfortable witnesses of his hidden crimes.

In space no one can hear you arguing with the producers

Supernova is a rather unknown sci-fi movie mixing action and horror in an elegant cinematic construction.

The production changed the script and the cast too many times, and finally, they even halved the original budget.

It will be such a disappointment even leading the director to deny his name in the titles, finally signing as Thomas Lee.

Despite some problems and sometimes incongruous twists, it remains a good value entertainment movie.

We all must try to rescue this rescue team

The movie has be one of the greatest talent waste from the director to its extraordinary cast.

James Spader is the main character and also the one who insisted on Walter Hill directing, partially remedying the disaster.

The actor returns to the sci-fi genre after 1994‘s international success Stargate, where he was the weak and clumsy nerd scientist.

In this case, it’s a tough commander just coming out of a long period of addiction trying to get his life back on track.

Helping him is Angela Bassett, the beautiful and good ship doctor with whom he establishes a romantic relationship.

The woman also had a bad drug experience due to the former drug addict husband.

Believing to left him in his past, she instead found him in front of her with the actor Peter Facinelli.

The man has become younger and stronger thanks to the alien artifact, which pushes him further into madness.

The action scenes are effective, and the rhythm is the right one, although he obviously abandoned many details along the way.

The result is a movie with undeniable problems but, equally honestly, working fine as pure entertainment and spectacularity.

However, I have always liked it, and I recommend it as a good experiment that just half failed.

A partially aborted movie from the beginning, but always widely above many more recent most acclaimed Sci-Fi movies.

So you, too, try to rescue this space rescue team and give them a chance, and I promise he won’t let you down.