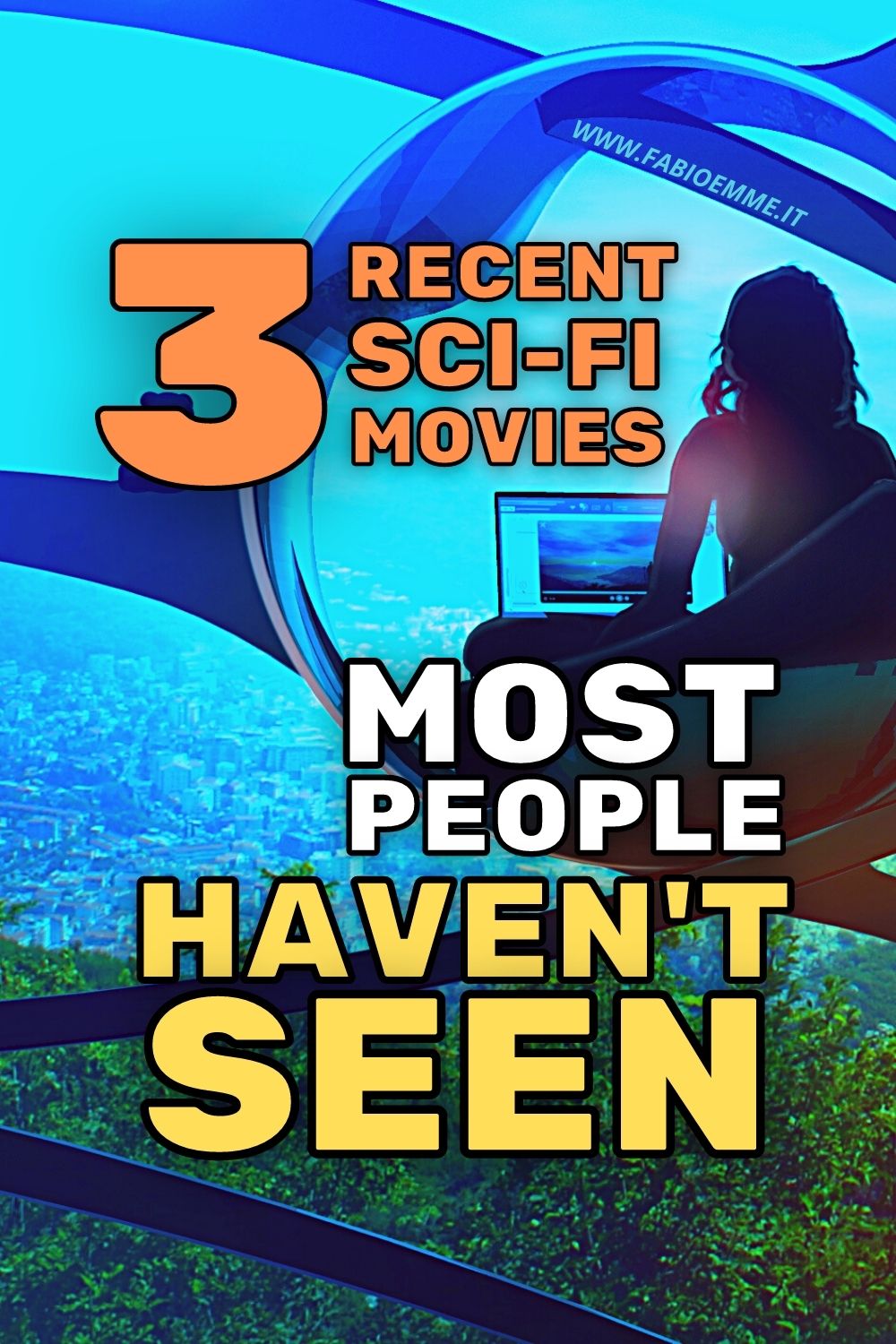 Every year, many sci-fi movies come out, and every people haven’t the material time, of course, to see them all.

In addition, distribution and advertising marketing push much larger productions.

The almost total of independent movies is partially or completely ignored.

Fairly or not, they are small big stories on their way to the cinema’s oblivion.

Only a few people on the web and blogs like this are ready to rediscover and give them a second chance.

We love to dig into the pile of movies left to collect dust, where we often forgot small treasures.

Here is the result of our mission with three movies that I loved to see, and I hope to bring other people’s attention.

Level 16 is a sci-fi movie about a group of girls born and raised in a closed facility without haven’t seen people outside.

According to the girl’s age, the place is divided into numbered levels strictly separated from each other.

Their education gradually rises until they’re ready for some families to adopt them.

But in the new group of 16-year-olds, one of the girls starts to suspect that it’s all a lie.

She furtively doesn’t take the mandatory sleeping pills, staying awake during the night.

Free to wander without control, she begins to follow the staff’s activities and their inflexible matron.

Fearing severe punishments, as happened in the past, she also will have to pay attention to her own companions.

Continuously under surveillance during the day, she doesn’t tell them of these secrets.

Indeed, they train all girls to total obedience, and they would betray her in the hope of ending up, in the future, in a good family.

When some of her friends mysteriously disappear, she understands that it’s time to act.

In order to survive, then, she’ll have to discover the terrible truth hidden behind their little world.

Dystopian students in a world of lies

The story has many good ideas built around an intriguing and mysterious plot.

Mannerism and conformist education are represented as a totalitarian regime with no way out for the poor girls.

Institution’s dogmas should never be opposed but only accepted by faith as a sect of religious exalted.

In addition, beauty and appearance are values absolutely superior to everything else.

The purpose of these girls is to be pleasant to look at and never challenge, under any circumstances, the established authority.

Ultimately, they were rising the perfect victims for a conspiracy whose true purpose will only be revealed in the dramatic final.

The death of youthful innocence

Of course, given the setting’s school theme, most of the cast is young, likable actresses.

In the story, Katie Douglas is the leading actress, the first to awaken her conscience against the lies.

The girl knows perfectly well the punishment of transgressions, already disobeying the rules in the past.

An experience that marked her and left inside a desire for revenge together with constant fear and confusion.

Her main enemy is Sara Canning, their blonde and cold mistress/teacher that is on them every day.

The woman has a rigid and apathetic posture and an almost inhuman attitude.

But she also takes orders from someone else, a mysterious doctor played by Peter Outerbridge.

There will be an ultimatum for all of them in an increasingly chaotic situation and on the verge of collapse.

Finally, the girl’s ultimate purpose will be to escape with her naive and innocent friend Celina Martin.

Danishka Esterhazy writes and directs this small movie with little resources but with a great desire to tell something.

The various twists reveal the story with the right time and rhythm of the narrative.

The characters are never banal or boring, creating the right atmosphere of repression and prison fear instead of a supposed school learning joy.

In essence, it is a story about the death of the youngs’ innocence bred by greedy adults searching for money and power.

The structure is the most famous and important historical piece of the company for which she works.

In fact, it was the prototype of a new kind of revolutionary fission at its first test after a large nuclear accident.

The new technology has brought immense wealth, allowing humanity to eliminate the radioactive threat and at the same time solve the energy crisis.

But strange data readings of local radioactivity arrive at headquarters, and the girl will have to leave to investigate in person.

Upon arriving at the site, the girl would like to speak with the scientist in charge of the plant.

But to welcome her, she finds a humble maintainer who does not seem to be very well and has no idea what is happening.

In addition, the whole area is disconnected from the network and cannot communicate with anyone.

She will solve the problem alone, becoming every moment more suspicious of the man with her, who may not be who he claims to be.

A small production but of great quality

Atomic is another sci-fi movie I see almost by accident and, like many other people, I had never heard of before.

A story that many could snub because is located in a single location and with only three actors to act all the time.

On the contrary, the various characters interact elaborately and interestingly.

Locked inside because of the radiation, the danger, and the claustrophobia feed the thriller and the story’s tension.

No one trusts anyone sitting on a giant nuclear bomb that’s gonna go off any minute.

Especially a question is always present: was it an accident or sabotage?

Three people to save or destroy the world

The beautiful Sarah Habel is the protagonist around which the other two male characters revolve.

She is a scientist from the sad past who is firmly convinced in her work and the company’s ethics.

She really is helping humanity with her work, or she is just helping the company hide a shocking truth?

A question to which her two co-stars have different answers, both deceiving her for their own personal purposes.

Dominic Monaghan and the worker who first opened the doors to her when she arrived.

A man of strange behavior who always responds ambiguously but seeming fundamentally harmless.

The actor, known by most people as the cute and funny guitarist in the TV series Lost, here plays a total different role.

In his own way, he manages to be both funny and disturbing, obviously straightaway revealing that he is hiding something.

Tom Sizemore, on the other hand, is the eminent scientist who oversees the entire facility.

As initially a brilliant, charismatic man, he too might have gone mad and suddenly vanished into thin air.

On his return, he begins a fight for the girl’s trust, accusing each other with the other man of lying.

Dagen Merrill uses the few means and actors available intelligently, and the script is written intelligently and never fails to amaze the viewer.

The director also has an excellent special effects department, wisely dispensed through the movie.

The industrial location in disintegration is perfect for building the idea of a structure on the verge of destruction.

Ultimately, it’s a movie you have no excuse not to give it a chance and watch.

After a long time, the son returns home, gone years before now, tired of their continuous ignorance and racism.

The father, in fact, is completely devoted to the authorities and deeply despises anyone who contests the system.

His arrival with his new Indian-born girlfriend immediately created tensions.

After having dinner together, offended by his grandfather, father, and sister’s continued racist statements, the couple decides to leave.

But when they open the door, they discover that an impenetrable black metal wall armored all the house exits.

In addition, all means of communication do not work, and an emergency message appears on all TV channels: Await Further Instructions.

The forced coexistence will be a slow and progressive descent to hell for the whole family.

The demons hidden behind familiar faces

Await Further Instructions is an independent sci-fi movie with one of the most disturbing atmospheres I have ever seen, and most people will also recognize in their daily life.

In our own way, each of us has to do with similar people and their ignorant and absurd speeches about politics, control, and immigration.

The science-fiction genre then becomes a pretext to talk about the human race rather than the invading aliens.

We can’t know what’s really going on in the outside world or even just in the neighborhood.

Ignorance is then added to the stupidity already present in the characters in a lethal and deadly mixture.

Divided between those who blindly trust the messages on TV and those who doubt, the group immediately divides into two factions in a deadly fight.

In god and TV we trust

Once the Internet has collapsed, television becomes the family’s only means of communication with the outside world.

Owing to the completely passive nature of the medium, each chooses whether or not to obey the absurd orders of television messages.

Sam Gittins, the protagonist who already did not want to go home before the alien lockdown, becomes a total prisoner of his family.

The boy already had a bad relationship with them, and the arrival of his Indian girlfriend (Neerja Naik) does nothing but make the situation even worse.

The horrible father Grant Masters and the vulgar old grandfather David Bradley are instantly taken over the command.

The two give orders as mad generals on the mother Abigail Cruttenden and the sister Holly Weston, ignorant and condescending without question.

Finally, Kriss Saddler is the weak and succumbing boyfriend of his sister, who will become the bully soldier small family dictatorial regime.

Director Johnny Kevorkian does a great job of turning our common world into a terrible sci-fi prison.

Within this absurd situation, we can all easily see sadly known and realistic characters and personal relationships.

With no external authority to interfere or sidetrack violence and racism, history follows its evolution until the inevitable war of all against all.

Await Further Instructions is a little social engineering experiment that works as an evil emotional trap.

The tension is present from the first minute, degenerating towards the absurd quickly once every personal freedom is repressed.

Ultimately, it is a movie most people haven’t seen, and every smart sci-fi lover should definitely have it in his collection.