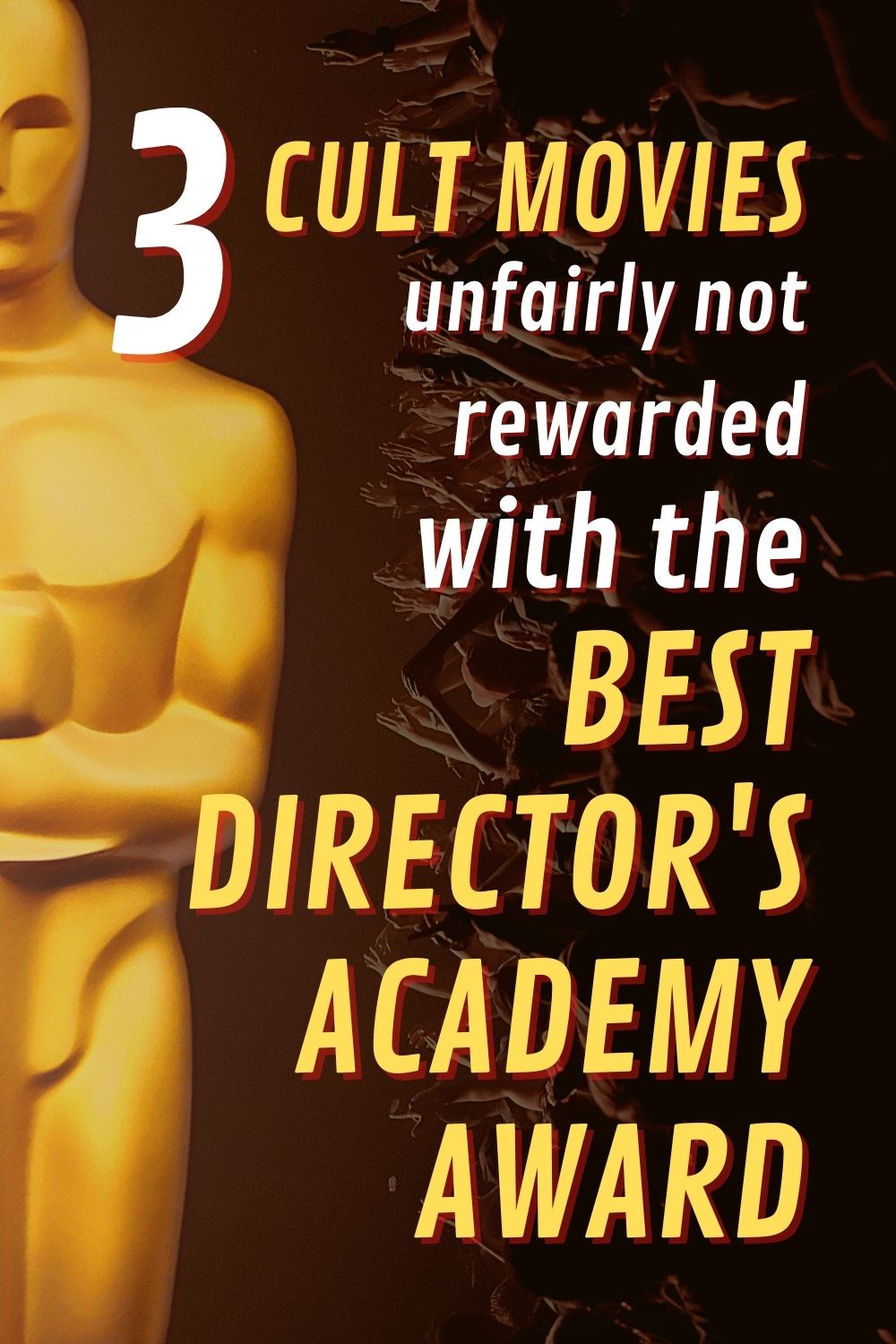 The Academy Awards are an award that we wait every year to admire the catwalk of the stars.

But are they actually a sensible and meritocratic award?

Indeed, it has often crossed my mind that behind it was mainly the logic of politics and production.

For example, as in the case of these three movies.

Three indisputable and unforgettable masterpieces without their brilliant directors awarded from the academy for an unfathomable scientific mystery.

Let’s go back in time and talk about it together.

Full Metal Jacket is the story of a group of young soldiers conscripted to serve during the Vietnam war.

Starting with their hard training, they quickly reach the physical and mental limits of madness.

The group lives under the command of a violent and inflexible Sergeant Instructor.

Not all of them will survive the test, psychologically succumbing to physical burden and humiliation.

Those who can overcome it will fly to the other end of the world to fight the Vietcong.

We follow closely the life of one of them, a soldier who becomes a writer for a famous military magazine.

Disrespectful and brazen towards his superiors, he always embarrasses them by making them nervous.

For this reason, as punishment, they sent him in one of the most dangerous areas of Vietnam.

There he’ll find an old training buddy and his new friends patrolling the front line.

Together they begin to clean the area from enemies armed with heavy weapons to facilitate American raids.

Until the entire platoon falls into the clever trap of a sniper who begins to decimate them one by one.

Laughing and suffering with blood and bullet

Full Metal Jacket are the Marines’ armored bullets, giving the name for one of the best Vietnam war movies.

It quickly become famous for its characters and the cruel, mean, and omnipresent irony.

Indeed, the great Stanley Kubrick makes almost a caricature of a war movie.

Turning the war ruthless routine into a comedy, emphasizing the frontline men’s inhuman madness like never been done before.

As usual, however, the staging and the director’s absolute style aims at total realism combined with an artist’s eye in the choice of shots frames.

How the Academy Award can not acknowledge even only for that, it remains an inexplicable mystery.

No golden statues for anyone

Matthew Modine finds here his life’s role as the soldier that everyone calls Joker.

He is a guy who has no particular physical skills above others but reacts to difficulties and constant danger with his delicious and indifferent irony.

Initially, he will flank the clumsy and shy Leonard (an exceptional Vincent D’Onofrio) dubbed Gomer Pyle for his constant stupid behavior and punishments.

All despise the soldier because his mistakes end up causing trouble for others, inevitably ending in a harsh reprisal from his comrades.

Finally, the most famous character is unquestionably the tyrannical Sergeant Hartman.

R. Lee Ermey plays one of the greatest and most mythical bossy instructors in the history of cinema.

The actor really has a past as a military instructor, became over the years an icon of the role satirizing exaggerated and cited in hundreds of other movies.

Even though it wins the Academy Award for the best non-original screenplay, sadly, the genius director and all these superb actors didn’t have a single nomination.

Full Metal Jacket discreetly cashed on its release in cinemas, but without becoming even remotely a blockbuster.

Nevertheless, the time has established its status as an absolute cult movie and one of the most famous directed by the inimitable Stanley Kubrick.

The world is astounded by the death of the old citizen Charles Foster Kane, one of the world’s richest and most influential men.

In all his life, this complicated personality was a communications tycoon.

By owning countless newspapers, magazines, and radio stations, he was able to influence public opinion.

Kane has tried several times, failing miserably, to exploit this power to get political positions.

Just as, equally miserably, he failed in personal relations with his employees, his few friends, and his wives.

The tycoon got close to many people, attracting them with his charisma and wealth.

But he could not keep anyone close, always ending up exasperating relationships because of his immeasurable ego.

Starting from Kane’s death, a journalist begins to investigate his whole life and the meaning of the last word he pronounced with his dying breath: Rosebud.

Citizen Kane was a breakthrough and one of the most important moments in the history of cinema.

Released in 1941, this movie is still inspired by its simple and elegant narrative power.

Combined with a stunning imagination, each scene is immersed in shadow and light like never before with the visual strength of a unique and unattainable work of art.

In the protagonist’s distorted mind, indeed, the American dream of wealth and well-being becomes a nightmare without a way out.

Imprisoned alone and abandoned in his immense mansion Xanadu, Kane finally comes to pity himself.

Ultimately, he was nominated for many Academy Awards but only won the Best Writing prize.

I’m the king of kings: Look on my works, ye Mighty, and despair!

The great tycoon mansion’s extraordinary opulence reflects his moral littleness and his poverty of heart.

Man is literally incapable of loving anyone but only of possessing others as a capricious child.

Along with his writer friend Herman J. Mankiewicz, they both fiercely hated the rich and overbearing tycoon.

They decided to transform his entire life into a dramatic Gothic parody, unaware that they were sculpting one of the greatest monuments in cinema’s history.

The rich and influential Hearst tries in every way to block Citizen Kane, even proposing to the production a large sum of money to destroy it.

Failed attempt miserably, unfortunately for him and much better for us film lovers, of course.

A corroborating story that, for once, showing to the king of kings that in life, not always and only money finally win.

The Good, The Bad And The Ugly is an epic treasure hunt back in the Great American Civil War.

Three criminals are on the road of a dying soldier, the only survivor of a Confederate army’s rich robbery.

But the man never got to enjoy the money, hiding it quickly in a cemetery before he was caught and tried.

Released without charge, the man is still wounded to death during the fighting.

Shortly before he dies, he reveals to two of the three protagonists the place and the name on the tombstone where the 200.000 dollars’ booty is hidden.

The two men, who before were mortal enemies, were born a momentary truce to find the money and abandon their criminal life forever.

But the third man, a corrupt Northern officer, has long been on the trail of the treasure.

Among them, a race against time will begin through a country divided and devastated by war.

Altogether, The Good, The Bad And The Ugly is without question the best western in cinema history.

Sergio Leone completes his journey to reconstruct the western started with his previous A Fistful of Dollars and For a Few Dollars More.

Three movies overturn the good and bad characters’ roles in the genre, choosing as the protagonists of morally ambiguous attitude and personality.

In addition, the director creates his own style made up of immense spaces and infinite landscapes.

Alternating with extreme close-ups of his actors’ eyes and each scene’s extreme details, he composes a wonderful portrait with every single frame.

His movies always have likewise two different rhythms, slow and sinuous in the story and fast and violent in the action scenes.

As shown above, it is a perfectly successful mix that has now become the front page of every film school textbook.

Although his movies were a thunderous box office success, American critics continuously belittle them with Spaghetti Westerns denomination.

A nickname to diminish Italian production quality obviously kept his work away from any award or nomination at the Academy Awards.

It later went even worse for his masterpiece Once Upon a Time in America.

Indeed, the last movie of the Italian director was openly ostracized in its distribution in the USA.

Cut by an hour in its integrity and forcibly reassembled chronologically, it lost all its power of magic and nostalgia.

The Good, The Bad And The Ugly is still today his most famous movie.

Every living director on the planet, consciously or not, has almost once been respected and quoted in its substance and form.

The three wonderful characters played by Clint Eastwood, Eli Wallach, and Lee Van Cleef have fed our imagination for over fifty years.

And I am ready to bet that, among other fifty years, a child will still fall in love with their adventures with lost eyes on Sergio Leone‘s immense masterpiece horizon.