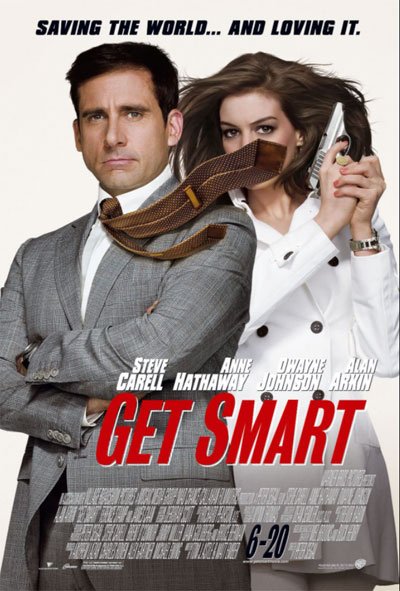 Get Smart is the story of an analyst of a secret agency.

He trains hard to become a spy but never had the chance to took the field.

Even after passing the operative’s exam, his boss orders him to stay behind a desk to be more useful.

Until a terrorist group attacks their headquarter and his chance finally arrives.

As the secret identity of his colleagues is compromised, he is still a stranger to his enemies.

Flanked by a beautiful and experienced female colleague, they will have to go to Russia to investigate.

Their task is to thwart a mysterious organization threatening a series of nuclear attacks, starting from Los Angeles.

From Russia with Love… and laugh

Get Smart is a demented spy comedy cleverly joking about all the genre’s stereotypes of espionage and conspiracies movies.

The funny gags are continuous, along with good action scenes between the usual plots and betrayals by secret agencies.

It’s also an action movie where finally the smart little guy is the hero who saves the world.

Even the romance is exhilarating, between the strange couple with the beautiful fighter and the brave rookie on his first day of work.

In addition, all the various secondary characters and the villains are equally demented, conforming perfectly to the protagonist’s jokes and humor.

Smart guy fights and big ones stay at office

Steve Carell drags the whole cast along as the star actor in the story.

His comedy’ works like a clock with his serious and elegant bearing combined with an irrepressible unmatched stupidity.

As a spy, his career has finally reached a turning point.

His colleagues respect him deeply as an analyst but have many doubts that he has the nerves to resist in the field.

Despite this, the silly, inexperienced agent launches fearlessly against the enemy, fighting and reacting like a veteran.

He’s coupled with Anne Hathaway, the perfect sidekick for the lead character’s comedy.

The beautiful actress is a professional who just changed her face and identity since she gave up her past.

Her impatient reaction to the rookie’s inexperience is adorable and never tires for the whole story’s duration.

She is also very skilled in action scenes, as she later shows, even better, as Catwoman in The Dark Knight Rises.

One of the funniest things is that the most intelligent and gifted spies fight enemies while the toughest and most muscular agents remain behind the desk.

The various office arguments between two massive actors as Terry Crews and Dwayne Johnson, are irresistible and could almost be a separated movie in its own right.

As I said, the action scenes are frantic and spectacularly built for fun.

The movie doesn’t give up being visually appealing, with great special effects and stuntmen’s good job.

The story is a successful mix of the various 007 plots, and in the end, it’s not the most important thing.

The task is to be a democratic entertainment and show built for sure fun to everyone.

A well-deserved success, especially for Steve Carell, will later show that he is also a great dramatic actor in movies such as Last Flag Flying and Welcome to Marwen.

If you want to know more about, read here: