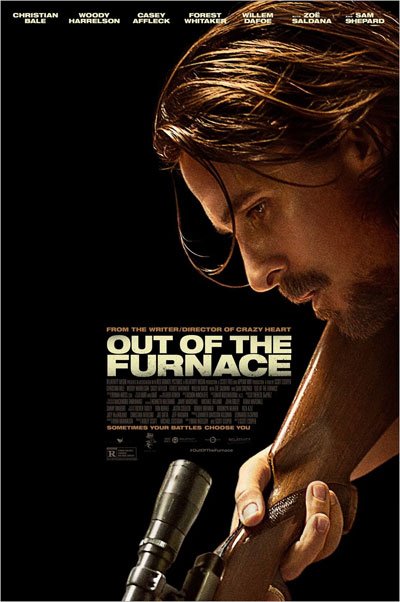 Out of the furnace is the story of a man trying to rebuild his life after prison.

He starts working in a furnace, trying to forget the girl he almost has a family with before the arrest.

The man is satisfied with small money to have a little peace and tranquility, but his brother disagrees.

On his bookie’s advice, the boy agrees to participate in a clandestine fight organized by vicious criminals.

They want him to lose the match to make money from gambling.

Giving up his pride, he agrees and lets the adversary defeat him harshly.

Despite this, the criminals kill him and the bookie in the local police’s indifference who are afraid of them.

Within man, there is born an uncontainable desire to avenge the injustice and his brother’s death.

Out of the furnace is a realistic and exciting drama about a quiet worker man.

Dragged by fate into a vortex of anger and violence, he finally becomes the hunter who always lied inside him.

All the characters have their credible fascinating personality. With their dark psychological depth, all their stories make a context that could perfectly be true.

The two brothers are an excellent metaphor for the harsh life in the American suburbs, here exposed without delicacy.

I think indeed this movie is dedicated to the poor workers having so few opportunities to lead an honest life.

Nevertheless, these men and women work hard without complaining, toiling all their lives without great prospects of ever being able to enrich themselves.

The hard life on the border

Christian Bale is wonderful at interpreting the evolution of this character and his fall into violence.

He’s a good hunter with a relationship of love and conflict with his family.

However, after he has gotten him out of trouble more than once, he never gets gratitude.

Until his brother dies and sees the police powerless, even though they know his killer very well and have evidence of the murder.

Disappointed by justice and a system that rewards the violent and punishes the meek, he will cross that border, taking the situation into his own hands.

The boy, however, has a good heart and is also courageous, wanting only, understandably, a better life.

He’s always been in a little underground combat, but this time he gets mixed up with people who are too dangerous.

Indeed, the men headed by a scary Woody Harrelson are predators living outside of any rule.

Their behavior is purely animal, based on fierce territorial control and domination through fear.

In their madness, they even show respect to the boy before kill him without mercy.

The rest of the cast is just as great.

Above all, Willem Dafoe and Forest Whitaker are respectively the unscrupulous bookmaker and the honest sheriff.

Both powerless in the face of local crime, they try to do the job without being crushed by criminals’ uncontrolled violence.

Finally, the sweet and beautiful Zoe Saldana is the protagonist’s lost love.

The woman seems still in love with him, but now she lives with the sheriff who can guarantee a safe and peaceful life.

This, of course, will further push the man not to want police help and seek justice personally.

Each of them is a prisoner of their own way of life, for better or worse, influencing others’ lives by seeking their own light for freedom.

The environments where the story takes place are poor and cold, hopeless little illuminated.

Indeed, all the locations are not very different from the prison from which the protagonist comes out at the beginning.

It is a prison from which man seems unable to get out and a world of criminals who seem to follow him, directly or not, wherever he goes.

Out of the Furnace is been almost forgotten since its release in 2013.

Received with indifference from the public, though sufficiently appreciated by the critics. It was still a commercial failure.

The actors’ notoriety was not enough to give light to this movie, today only recommended by bloggers on the internet like me and a few others.

But like so many other times on this blog, we forget the results at the box office, and we look only at the pure quality.

Definitively I am more than certain that this movie will not disappoint if you give it a chance.