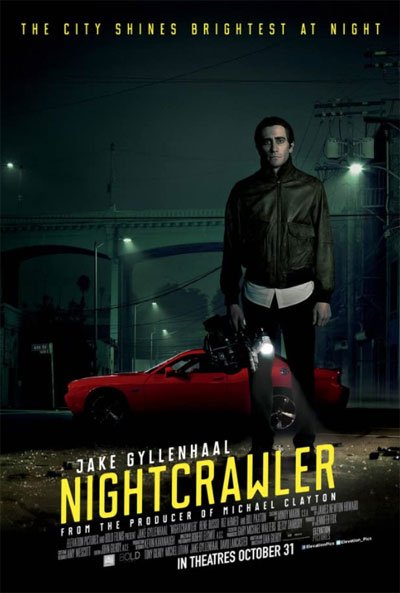 Nightcrawler is the story of a lonely psychopath earning little money from petty theft.

Wandering through the streets of Los Angeles all night searching for something to steal, he runs into a car accident one day.

When some people with cameras come to the scene, he overhears how much money they make by selling their television services.

Straightaway, he decides to become an independent cameraman, helped by an underpaid partner and scouring the city searching for crimes and gore to film.

The man quickly learns the little trade tricks and how much worth his work. Until he performs a precious service inside the home of a wealthy family massacred by a gang of criminals.

Without confessing anything to the police, he decides to follow them to see if they will commit other crimes.

Armed with his trusty camera, he will be the epicenter of an inevitable clash between the gang and the police.

Nightcrawler is the crazy story of a ruthless psychopath making a career quickly as a violent filmmaker for the news.

Despite his friendly and almost naive appearance, the man hides darkness and lacks feelings for others.

We see his mental sickness from the story’s first minutes since a guard discovers him during a petty theft, so he kills him without any hesitation or guilt.

The thriller is exciting and perfectly constructed in its madness escalation, directly proportional to the protagonist’s well-being and social status.

Onboard his flaming red Dodge Challenger, he runs out of control at full speed through the city, chasing scoops like a modern predator.

An amazing cast and director do the magic

The actor, who had shown his talent since Donnie Darko, has grown exponentially over the years.

In this case, he plays an uncontrollable madman looking for success and money.

With the next-door good guy’s utterly ordinary appearance, the man arises in ferocity the more he advances his cameraman’s career.

On his way, he will find another operator Bill Paxton as enemy/friend.

Initially, he mocks his naivety, refusing to help him with simple advice or give him a chance to work.

Only later would he like him as a partner, after noticing his quick achievement and television clips have gone viral on tv.

But it will be too late for him to save himself from the psycho’s revenge.

More importantly, however, it will be Rene Russo‘s character.

She plays the beautiful and unscrupulous director of a well-known local news program who first buys one of his works.

The more mature and experienced woman will guide him in his climb to fame, anything that helps raise her channel’s share.

Indeed, her character is the perfect strong metaphor for today’s news becoming a shocking show at any cost.

Excited by the bloody crime he digitally records every night, she totally doesn’t care how he does his job.

However, once she realizes her career depends on him, she gives in to his blackmail and psychological games.

Dan Gilroy, already screenplay author of “The Bourne Legacy” or “Freejack”, directs his first movie and leaves his mark.

Nightcrawler was a huge commercial success worldwide, against a very limited budget for its production.

It is definitely one of the movies that most impressed me in recent years and an extremely realistic and cruel representation of the modern mass media.