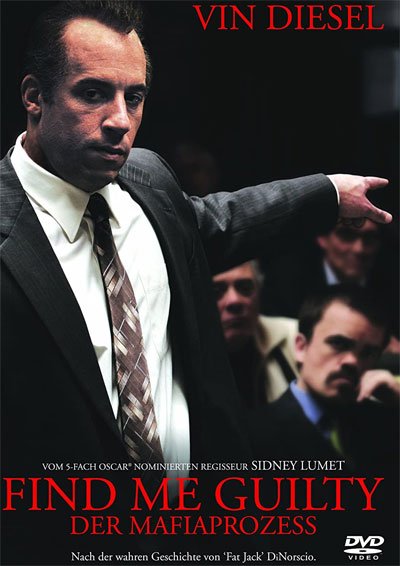 Find me guilty is the story of one of the largest and longest trials in American history.

The prosecutor put an entire mafia gang on the stand, but a small drug dealer becomes a big problem.

The criminal, in fact, is extremely disappointed by his previous experiences with lawyers that led him to a long sentence.

So he decides to defend himself, arguing his case like the countless lawyers of his accomplices.

He will be repeatedly reprimanded by the judge, ignorant of the rules of conduct in court and without any legal notion.

Besides, half the defendants deathly hate him, as he is considered a villain who has moved from one crime family to another.

But slowly, his sincerity and straightforward talking win the jury’s sympathetic trust.

The prosecutor, ultimately, ends up considering him the number one enemy for his big trial.

So he will try to make his life difficult inside the court and jail.

Find me guilty is an old-fashioned legal movie with the rhythms and tones of classical comedy.

Inspired by actual events, the story takes place day after day for over a year of court hearings.

The movie does not take sides, painting criminals for their violence as their friendly and cocky attitude.

Similarly, the prosecution’s lawyers are not the heroes, resorting to any means to win the case.

In short, the story does not take anyone’s side. Trying to bring back the pure events into a splendid characters’ comedy, remaining perfectly neutral.

In the criminal and self-lawyer role, there is an exceptional Vin Diesel, undoubtedly in the best performance of his life.

Usually applied to alpha man muscular roles, this story brings out an unsuspected comic verve from the actor.

In addition to comedy, there are also dramatic and touching moments about family and supposed friends surrounding his character.

Indeed, many defendants are former gang members who betray after the arrest.

Once inside, many of them dealing with the prosecution to get shorter sentences, selling their life’s companions and friends.

Peter Dinklage plays his only friend as one of the many defense attorneys.

Immediately realizing the positive influence he can have on the jury in favor of the gang, he will slowly guide him through the process.

He helps advising him to tone it down and not be disrespectful to the judge, played by Ron Silver.

He’s a powerful man for whom everyone immediately feels fear and respect.

Despite this, he is also reasonable and sarcastic, willing to accept all the defendants’ arguments without hostility or easy racism towards Italian Americans.

This magnificent legal comedy is the second last movie of the great master Sidney Lumet.

The director, who had started in the ’50s just with another legal movie, 12 Angry Men, sadly left us forever in 2011.

In this case, he decides to focus on the dialogues bright and funny, without neglecting the various characters’ psychological and emotional side.

Given these points, Find me guilty is a unique movie and another unforgettable piece of his filmography.

Sadly, it was a box office flop, too quickly forgotten by critics and ignored by the public.

Personally, it’s definitely my favorite movie with Vin Diesel, who I really appreciated for some special performances like Pitch Black and Boiler Room.

If you are going to like this movie, then you must definitely consider these as well: