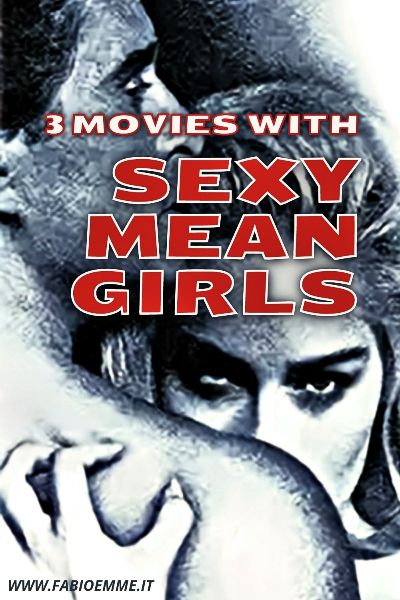 Maybe you’ll never dream of finding them on your way… but they are so good at being bad!

I have chosen for you three stories with some very bad girls, although they may not seem so.

For one reason or another, these are movies that stuck in my memory and couldn’t get out.

Derailed is the story of a man leading a quiet life with a good job and a loving wife, taking care of his seriously ill daughter as best he can.

Until one day, by chance, he meets a woman on the train he takes every day.

Strongly attracted to the sexy stranger, they decide to have a relationship and go to a hotel to make love.

But while they are in intimacy, a thief breaks into the room, robs them, and abuses the girl.

It will be only the beginning of a series of blackmail and bullying by the criminal for the lovers’ couple.

The man is desperate and, wanting to get out, asks for help from a young hooligan friend.

But he finds out the truth about the girl, not so innocent as than she initially seemed.

Derailed is a family drama that intriguingly combines romance with the crime genre.

The movie has some good twists capable of reviving the rhythm when the tension seems to drop.

Lies and desire in a dirty sexy scheme

Definitely, its greatest strength lies in the actors around which the story unfolds.

Clive Owen is an excellent protagonist who transforms himself from a moderate ordinary person into a desperate with no way out willing to do anything.

The man begins a relationship intrigued by the idea of ​​adventure and escaping from his daily family worries.

Jennifer Aniston strays a lot from Friends‘ famous character, where she was a cheerful, optimistic, and goofy party lover.

In this role, she is more sexy, mature, and mean than ever in the various romance comedies she had already played for cinema.

Her gaze hides a sadness that will remain without explanation, and the actress finally becomes a fascinating and mysterious woman from the already beautiful girl she was before.

Talking about Vincent Cassel is almost useless, being an extraordinary actor in any role he plays.

Indeed, he has perfect charisma as the story’s villain, looking for the money by any means at his disposal.

Devilish and ruthless, he’s perversely fun to admire with his compassionless grin, helped by his equally wicked accomplice played by the famous rapper Xzibit.

Mikael Håfström directs a good drama capable of touching the right points of the great rainbow of feelings.

All characters are fascinating and never banal in a story with high tension within a series of seemingly everyday situations.

Derailed It’s a movie that divided opinion between criticism and appreciation, despite having good commercial results.

Until now, unfortunately, it remained the only dramatic role so far for sexy mean girl Jennifer Aniston.

I recommend it to the actress’ fans, but not only, like a movie to better know another unexplored side of her personality.

Basic Instinct begins with the murder of a famous rock star, brutally stabbed while having sex with a stranger.

The detective in charge of the case immediately starts indagating his girlfriend, a sexy mean girl, and a famous gory novel writer.

The woman declares her innocence, but her attitude is deliberately provocative and suspicious.

In addition, the singer’s murder occurred in the same way as described in one of her famous books.

Sexually attracted to her, the detective begins a two-way game between the writer and a fellow police psychologist.

The doctor is in charge of assessing her psychological state after a shooting with civilians casualties.

After discovering they already know and hate each other before, the man is sure that the killer is one of the two women.

Basic Instinct is one of the sexiest and most famous thrillers of the 90s, an intriguing, elegant, and brutal film full of Alfred Hitchcock’s style.

The mystery of the investigation connects perfectly with the seduction game embodied by its protagonists’ sublime charm.

Murder as art and seduction

The hottest confrontation is between the two fantastic women fighting for the detective’s attention.

Sharon Stone plays a crucial role in her career.

She is perfect as an uninhibited artist and an intelligent, elegant, and dangerous woman.

The famous scene in which he crosses his legs during the police interrogation without panties is now part of the collective cinematic imagination.

Against her is the more sober but equally attractive criminal psychologist played by Jeanne Tripplehorn.

The beautiful policewoman desperately wants her man to have eyes only for her, but this is not the only reason for her hostility.

Indeed, in her youth, she has a history of love, hate, and revenge against the writer, making his man equally suspicious she can be the murderer.

Michael Douglas is the axis of their discord in the role of one of the most envied men of the 90s.

The actor loads the plot on his shoulders for excellent performance, notably making his character strong and sympathetic.

He plays a man who thinks he’s smart but he’s always deceived continuously by these two women.

Crushed in their mind power game, in which no one wants to lose, he doesn’t know who to trust until the end.

Basic Instinct remains at the moment his most amazing success at the box office, surpassing the revenues of his other big blockbusters such as Robocop and Total Recall.

Wild Things is the story of a high-school counselor. His happy life is suddenly turned upside down when two students claim he molested them.

Initially seeming ashamed, they are encouraged by the mother of one of them, already a man’s enemy before.

Taking the opportunity, she decides to ruin him permanently in court.

Thus, deepening their city secrets’ knowledge, they discover a world of grudges and lies waiting to explode at the first opportunity.

Quickly, they discover the cunning and patient mean girls’ game, without knowing that the conspirator is elsewhere.

Indeed, the man has a plan to take revenge on personal issues.

A satisfaction that has waited a long time to earn as much money as possible in compensation.

Their elegant and refined world collapse under greed and petty little personal grudges in a fight against everyone.

Denise Richards and Neve Campbell are an unforgettable couple of mean girls.

The first is the spoiled and rich daughter of a family powerful and rooted in society.

The girl is popular among her classmates at school. She dedicates her fancy life to parties and the most exclusive clubs reserved for the elite.

The second is an outsider who lives isolated outside the city.

Well known for her angry and unpredictable behavior, she seems like the most different there is to the other girl.

Matt Dillon is (or appears to be) initially the sacrificial victim of their plot.

The teacher is very fond of his students, enjoying provoking them every day.

It’s easy for the authorities to suspect him. Believing he has once, finally, let go of an inappropriate relationship with a young sexy girl.

The couple of sex symbols that cops make are just as flashy as the beautiful Daphne Rubin-Vega and Kevin Bacon.

The two, despite appearances, decide to investigate a case that seemed already solved at the beginning.

They will have to hold on and not be intimidated by their suspects’ money and not even by the big media mess that immediately surrounds their case.

John McNaughton directs one of the best-known and most successful movies of his career as a director and screenwriter.

The author of Henry: Portrait of a Serial Killer It’s very skillful in giving the common teenager face to a story much layered and deeper than it looks.

Wild Things came out at the end of 2000 and so the younger ones might not know it, but it was for a short time another generational movie.

After falling into the oblivion of the forgotten cult, we can conclude by saying that it is finally time to rediscover it and admire its biting actuality.