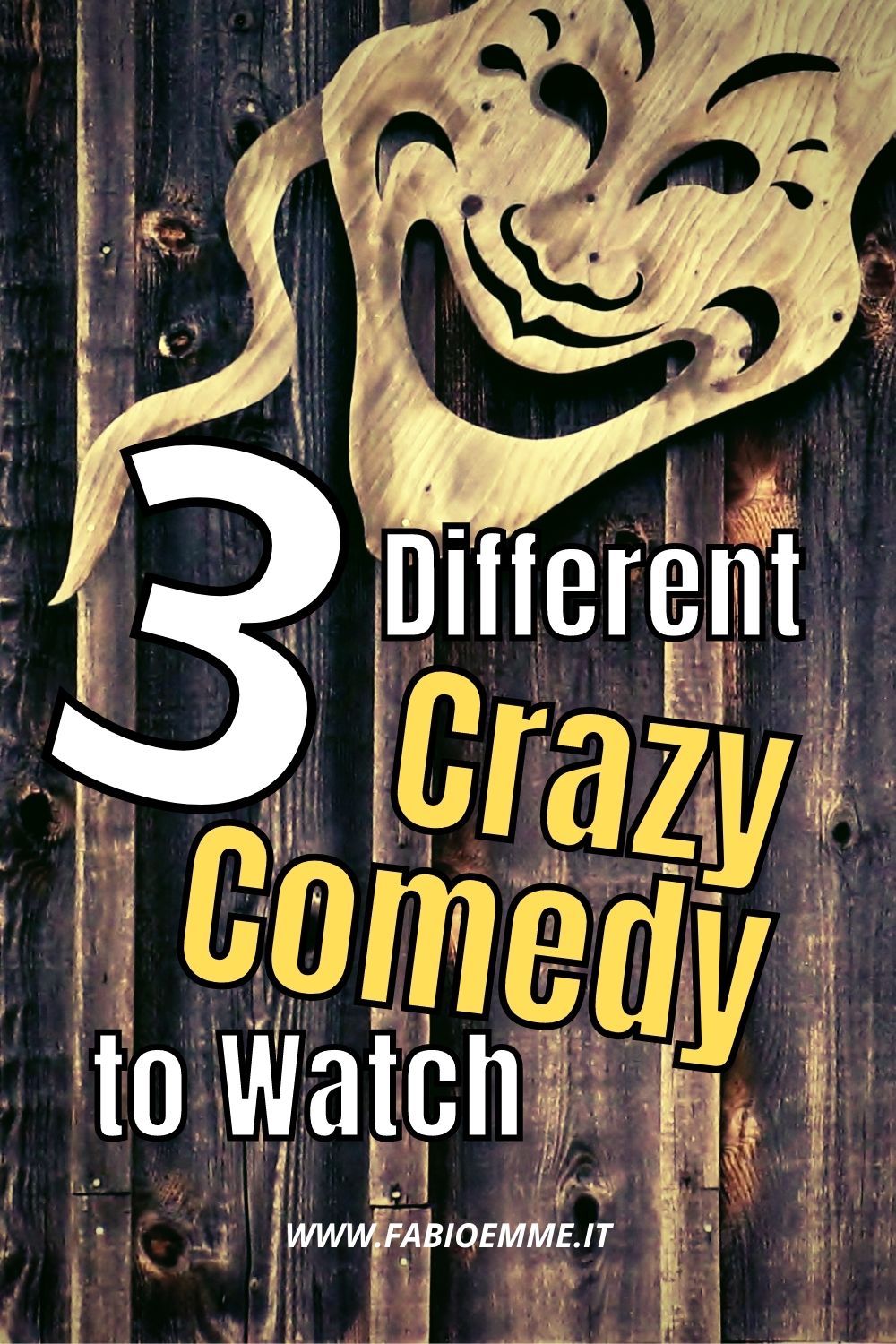 Someone says that you have to live like a comedy and crazy laugh at least once a day to be happy.

And what’s better than a mad movie to laugh with heart?

Let me, therefore, recommend 3 Different Crazy Comedy to Watch, hoping they will help you on dark days and make the bright ones shine even more.

Cecil B. Demented is a crazy director at the head of a wild troupe dedicated to artistic terrorism.

They think producers are too busy giving the public what they want without daring to create something new and original.

To shake up the industry, the group kidnaps a famous actress to participate in their independent movie.

She refuses, but under threat, joins the shooting raids on the city streets, always on the run from the authorities.

Initially frightened, she begins to sympathize with the group, excited to have a starring role finally.

She thus joins the cause of the crazy director and his friends, fighting to shoot the last scenes hunted by the police.

In conclusion, of course, they will figure out how to project it to their public waiting for their mad anarchic film.

Cecil B. Demented is a comedy about the crazy love for cinema and what it takes to sacrifice to defend this art.

Indeed, each crew member tattoos their favorite director’s name as a sign of a life dedicated to the cinematographic cause.

Otto Preminger, Spike Lee, Pedro Almodóvar or Sam Peckinpah are, as an illustration, some of the artists they venerate.

Different directors have all fought to impose their vision, creating a style and never giving up on marketing logic.

Stephen Dorff is the general who leads them in this war, in the role of the incorruptible artist Cecil B. Demented.

The man is willing to sacrifice himself and his entire crew in order to complete his masterpiece.

He chose them for their madness, in the first place, but also their skill in their jobs on the set.

From lights to sound, through makeup and special effects, the director does not miss anything.

Among its employees, we can note two young who will later become wonderful actors, such as Maggie Gyllenhaal and Michael Shannon.

Finally, Melanie Griffith is their hostage, who will end up getting crazier than all of them put together.

Initially interested in taking part in yet another silly high-budget production, the girl will become for the masses the symbol of independent cinema’s courage.

A mad director and his love for mad comedy

Without failing to entertain his audience with a show with a great pace, the director mercilessly criticizes the glossy and muffled world of the stars and producers of cinema.

Its protagonist and friends are the living metaphor of all the artists who remain cut off from that system of money and falsehood.

But not only. The director also states that to be an artist, you need madness and the desire to go against the mass, daring to create something new.

A risk that many productions no longer want to take, preferring the receipts certainty making banal and soulless movies.

Fatal instinct‘s protagonist is a man with two jobs: policeman in the evening and lawyer during the day.

Widely satisfied with his careers, the man cannot guess that tough times await him.

One of his clients is coming out after a lengthy prison sentence, bent on retaliating against his former incompetent lawyer.

In addition, his wife and lover plan his murder together to pocket the insurance money.

Finally, a mysterious and sexy blonde begins to follow him everywhere, intent on ruining his marriage and his life.

His secretary will be the only one to remain faithful to his misadventures, secretly in love with him but also hiding a dark past.

Slowly, all these little stories will come together until a devastating showdown where everyone will try to kill everyone.

A movie without a brain, yet really smart

Fatal instinct is a demented exaggerated crazy comedy like Hot Shots or Airplane!.

The story doesn’t want to be credible, but only to generates a continuous series of gags and entertainment from the first to the last minute.

Armand Assante proves to be an incredible comic protagonist.

The actor is always used to rigid and severe roles. In this case, however, he has excellent self-irony by playing an idiotic and inept character.

The man, besides, is surrounded by a phenomenal female cast.

As his wife, there is Kate Nelligan, also an actress who is usually in more dramatic roles.

In this case, she plays a nymphomaniac dissatisfied with her husband, planning his murder with her young lover.

Sean Young, the unforgettable protagonist of Blade Runner, is instead every thriller’s inevitable femme fatale.

As a mysterious blonde in Alfred Hitchcock‘s style, she incessantly courts the protagonist to betray his wife, against whom she intends to take revenge.

Finally, the beautiful Sherilyn Fenn from the Twin Peaks series is his beloved and faithful secretary.

She’ll be the only one to suspect and try to warn him from the other two women.

But she, too, hides a sad past with a violent ex-husband who comes to town to get his revenge.

From one mad comedy to another

Indeed, he comes to this movie after other great comedies like Dead Men Don’t Wear Plaid and The Man with Two Brains starring the hilarious Steve Martin protagonist.

Fatal Instinct is his purest, no-holds-barred comedy, a totally insane story in the tradition of the famous Zucker / Abrahams / Zucker trio and films like The Naked Gun.

Unfortunately, this movie was not as successful, and today it is almost completely forgotten.

But true lovers of high-paced fun are sure to find what they are looking for in one of the most underrated crazy comedies of the last 30 years.

Stretch is the story of a limo driver at the worst moment of his life.

His beautiful wife left him, and he can’t help but think of her. Besides, he’s stuck in a job that will never lead to anything.

And as if that weren’t enough, he has one day to pay a heavy debt, with shady criminals threaten him.

With no idea how to earn that much money, he wanders through the city doing his daily job.

Until an eccentric billionaire climbs on his limo and asks him to pick up a big bag of drugs to deliver in a short time.

If he succeeds, he’ll earn enough tip to get himself out of trouble.

But he can’t know that the police control the exchange site, waiting to arrest anyone who shows up.

Finally, his creditors are tired of waiting for his money and sent brutal thugs to teach him a lesson.

In this stories’ crossfire, his only hope to stay alive until evening is to be ingenious and luckiest than others.

Just one day to live in Los Angeles

Stretch is a reckless and crazy action comedy about a man at war against the whole world.

He is inevitably going to the bottom in the desperation and indifference of his colleagues and supposed friends.

Only by finding the necessary strength within himself and playing with no rules can he survive.

Patrick Wilson is an exceptional protagonist, with the amusing charisma of a man who is so troubled that he is almost indifferent to his tragic situation.

The actor immediately conquers the audience with his charming smile and his sharp self-irony, accompanied on his journey by the ghost of a colleague played by Ed Helms.

During his long day, the driver will face numerous celebrities such as David Hasselhoff, Ray Liotta and Norman Reedus, genuinely credible and naughty in their little cameos.

His only friend will be the beautiful receptionist played by Jessica Alba, as the only ray of light that illuminates his darkest day.

Forgotten and abandoned cinema to save and re-evaluate

Personally, it is my favorite movie of Joe Carnahan‘s filmography.

The director shows he can make great entertainment and, when it wants to be more demanding, serious movies like the magnificent The Grey.

The story travels smoothly without hesitation from one location and one situation to another in the great urban jungle of Los Angeles.

Its protagonists’ wickedness is sharp as a scalpel and the omnipresent humor and amusement make it cheering, but not stupid.

Stretch is a movie that I recommend to practically anyone, despite making little money when released, probably due to mediocre distribution.

It can satisfy everyone’s cinematographic needs, for a pleasant evening with friends or to cheer up when you are sad and lonely.

Another movie that demonstrates how to search in the past (not that far, being released in 2014) can bring light small and beautiful gems to be polished and admired again.

Movies About Making Movies – When...

The Vanishing Of Sidney Hall –...