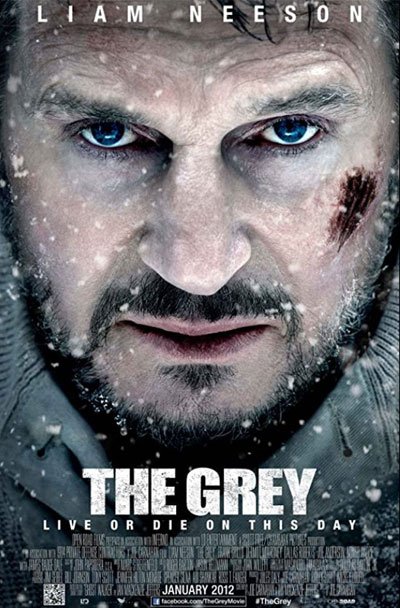 A group of workers is returning home after a long shift in an Alaska refinery. Suddenly their plane crashes, and they remain isolated and surrounded by a pack of wolves that starts to hunt them.

Initially attracted by the fire they have lit to warm themselves, wolves become more ferocious after tasting human blood.

But later, they brutally kill a wolf and exhibit his head like a trophy. At that point the rest of the pack search for revenge trying to exterminate the survivors.

Their hope to get out will be an old hunter, responsible for their safety. He is the only one among them to have experience in a hostile environment where they must fight.

The Grey is an excellent movie of men against nature where men regress to animals, ready for anything to survive.

The natural locations are magnificent, and the story has a breath and a light totally immerse in the seemingly infinite forest where the protagonists lost.

In addition, animals also behave in a very human way. Indeed, they being carried away by deplorable feelings of revenge against the men who attack and humiliate their herd.

A hunter without a past, except sporadic flashbacks of his wife and father, creating the character without narrating the background.

Equally good is Frank Grillo, modern action star and man of experience in movies such as the saga of The Purge, Warriors, and Beyond Skyline.

Initially cynical, he becomes desperate until he comes to peace with nature, in the last scene among the most touching and delicate of all history.

Here, Joe Carnahan‘s direction is perfect. More posed and skilled than in his other more amusing and smashing movies like the A-Team or Smokin’ Aces.

Despite the violence and blood, The Grey is an act of love towards nature untouched by human beings’ presence and oppression.

A cruel poem where the magical sounds of a river or the wind are the best part of the soundtrack, indifferent to the miserable suffering of the survivors of the accident.

The movie earned good box office worldwide, signing another hit for the director, despite being forgotten and little mentioned today.