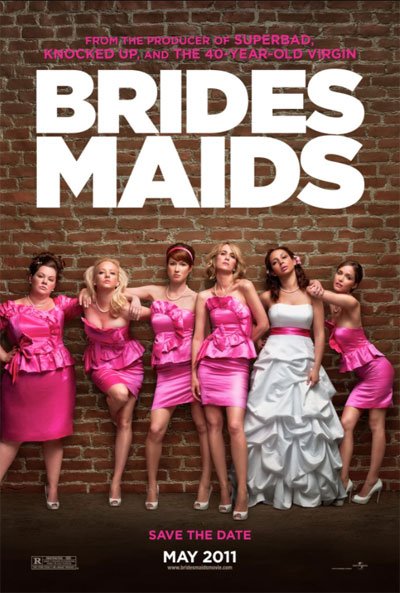 Bridesmaids is the story of a woman who has to organize her best friend’s wedding.

The extraordinary occasion directly reflects on her condition as a 40-year-old single who only has occasional shallow and meaningful relationships.

Thanks to the marriage, she meets the bride’s other friends. Some will be nice and kind, others much less like a snobbish and arrogant woman, becoming her bridesmaid nemesis.

One evening, a policeman stops and starts flirting with her, wishing she can finally find a lasting relationship.

But shortly before the wedding, she has a nervous breakdown.

Stressed out by her organizing duties, she explodes in a fit of anger in front of the bride’s whole family.

Alone and sad, she will have finally put the pieces of her life back together. Before we go to the wedding, she’ll try to decide which direction to take to be happy and independent.

Bridesmaids is one of the best American female comedies of recent years.

The story is full of fun and even sad moments, confronted with joy and courage by its brilliant protagonists.

Mistakenly confused as The Hangover with women, this movie is less comically explosive but just as clever and well constructed.

The cast is perfect and includes several talented comedians from the famous Saturday Night Live.

Kristen Wiig is also, as well as the lead actress, also co-author of the screenplay.

She is a beautiful woman and no longer young who often gives in to her weaknesses, and for this reason, she is more credible and human.

At his side is the devastating Melissa McCarthy, an ever-erupting volcano of hilarious jokes and comic scenes.

The woman accepts with irony the fact that she is undoubtedly not a supermodel, facing life hard-nosed, always starting on the attack and striking first.

Rose Byrne is merely outstanding, striving to be annoying and arrogant but always adorable and lovely in the end.

The actress is the one who has perhaps the most complex character, living behind a facade ready to collapse to reveal all her hidden fears.

Finally, Maya Rudolph is the bride around whom all the big mess revolves.

She is initially trying to stay close to her friend, as the protagonist’s old and best friend.

But the increasingly uncommon circumstances of the marriage will put pressure on their patience and friendship.

The story is for families, but it does not miss talks and scenes about sex or drugs, absolutely uncensored and faced without fear by this fantastic group of women.

It has been hugely successful worldwide, grossing nearly $300 million.

A deserved victory for a comedy written by a woman who speaks to women without shame helps us understand the female universe better.

In summary Bridesmaids it’s definitely a movie for everyone, using the key theme of marriage to talk about life, love and the pursuit of happiness.