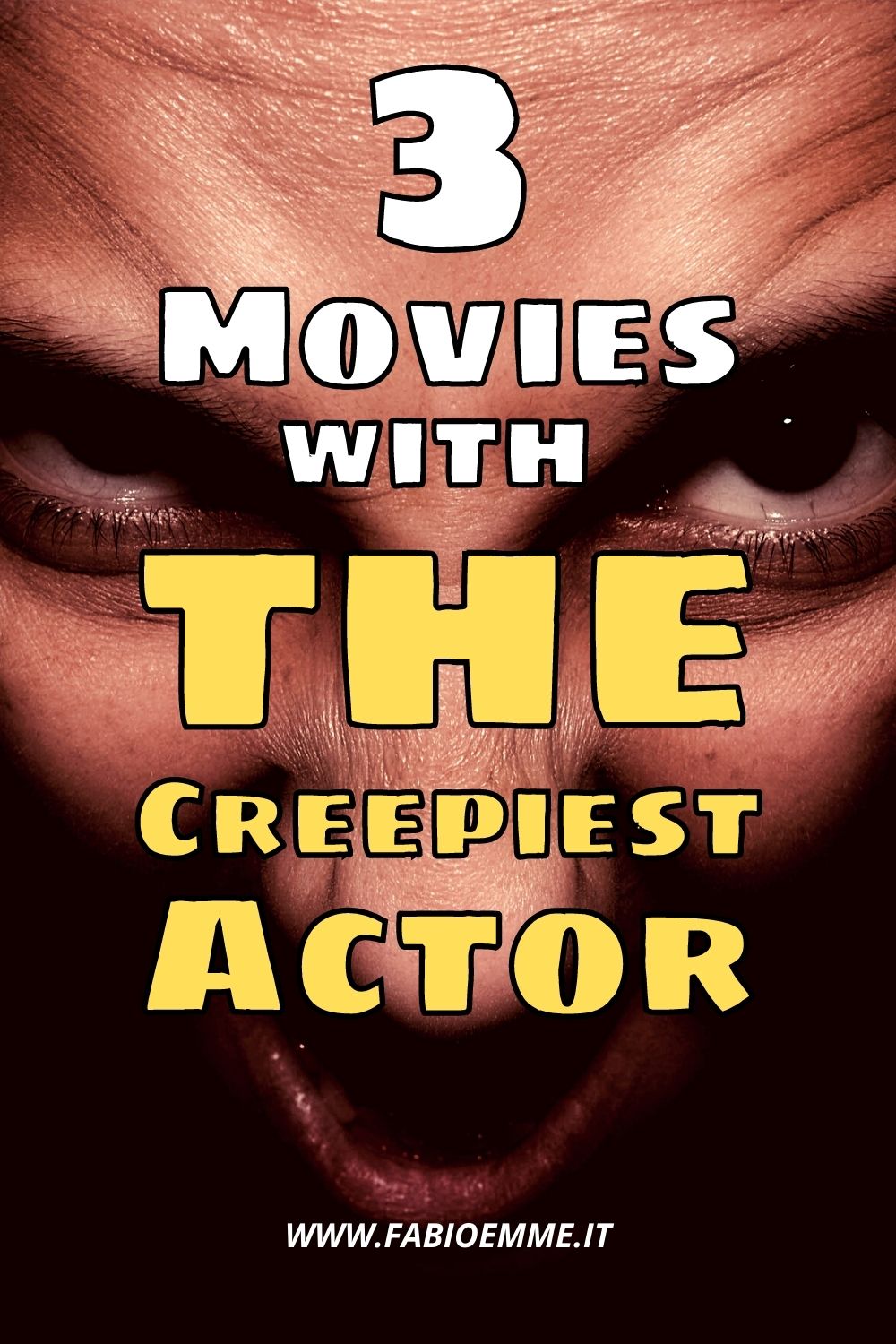 Beauty is often in the eye of the beholder. So even movies with the creepiest actor create their own charm that, perhaps, other more beautiful and sexy colleagues can not have.

Therefore, let us look closely at three of these great actors who have had to make their way with their talents, rather than the mere and vain simplicity of outward beauty.

Timestalkers is the story of a teacher passionate about the western period. During his historical research, he makes an extraordinary discovery.

Indeed, examining a photograph certified as from the 1800s, he notices that a man is holding a modern 357 Magnum.

He intends to investigate the matter further when a woman immediately contacts him, claiming she’s interested in his case.

Initially reluctant, she reveals to come from the future after reading the book, that he has not yet written, about the photo’s historical inconsistency.

Consequently, she is looking for the gunslinger with the 357, convinced that he is a mad scientist intent on changing history’s course.

Being the leading historical experts of that period, the teacher agrees to return to the 1800s with her to stop him and avert the threat.

The good, the pretty and the ugly

Timestalkers is an intriguing sci-fi investigation and the only time travel movies with the creepiest actor Klaus Kinski.

He is a scientist hating his mind-limited colleague, deciding to take revenge to demonstrate he’s wrong by eliminating his entire family tree from history.

Besides being a man of great intelligence and ingenuity, he is also an excellent gunfighter.

Thanks to his ability, he kills three opponents during a duel and then lets a journalist photograph him in front of their open coffins.

But the detail of the gun will be his only mistake, leaving a trace behind him that time travelers will use to track him down.

Although he is a mild teacher suddenly on a dangerous murderer’s tracks, William Devane plays the hero’s role conscious of not being unbeatable.

The actor is convincing in his comfortable civilian outfit as in the dirty, dusty clothes of the 1800s.

Despite the danger, he is also happy, finally realizing the dream of visiting that world he always loved through books.

Lauren Hutton plays the messenger from the far 2500, as one of the family’s descendants risking the extermination from existence.

She’s equally nice and curious about our cultures since our present is just rustic and mysterious to her as the western’s time for the teacher.

She will ride with the hero back in the past, discovering a dirty world of violence and murder but also with an indisputable charm and desire for freedom.

Sometimes they come back… on TV

Michael Schultz directs this low-budget story, leaving the right space for the good cast coupled with a solid screenplay.

Initially intriguing with the sci-fi premise, he then transports his characters into a classic western where the good guys have to stop the villain.

The movie works well in the two movie genres, skillfully mixed and alternated to form a romantic, adventure and action mix at the same time.

Initially born as a simple TV movie for CBS, Timestalkers has been much appreciated by the public and repeatedly revived over the years with excellent ratings.

15 Minutes begins with two immigrants who arrived in the USA from Eastern Europe.

They come to find an old accomplice owning them money after an old heist went wrong.

When they can’t get their part, they brutally kill him and his wife, filming the murders with a camera.

Since then, they will unleash a whirlwind of violence in the hope of becoming rich and famous.

To achieve this, they will make a sick documentary with their murder video.

A young firefighter is not fooled by their crime scene, cleverly constructed as a domestic incident.

He convinces the detective in charge is wrong about the fire incident’s details, thus investigating together.

They soon discover more victims left behind by the two immigrants during their blood journey among the city streets.

When a witness survived the series of murders, the youngest tries to defend her in every way.

Also, since the detective is a celebrity who often appears on TV, the two killers make a plan.

They want to kill the cop, put it on video, and later exploit his notoriety and later become rich and famous.

15 Minutes is a thriller movie with the creepiest actor Karel Roden, a mad murderer abusing the mass media’s brutality and indifference.

In this false and ruthless world, journalists reward criminals by covering them with money to exclusive their stories by all means.

Concurrently, they ridicule and cause trouble to the firefighter, despite risking his life several times to stop the two psychopaths.

The two pairs, in contrast to each other, are smartly well matched.

The two criminals, albeit evil, have an almost childlike naivety with the faces of the two actors Karel Roden and Oleg Taktarov.

Women in this story are also essential.

Indeed, Melina Kanakaredes and Vera Farmiga, sweetening a very raw and destructive story with their femininity.

The mad struggle for notoriety

15 Minutes is an exciting parable of the search for money and success, by all means, written and directed by the excellent John Herzfeld.

The movie’s title is a quote from Andy Warhol, who once claimed:

In the future, everyone will be world-famous for 15 minutes.

Considering that he came before social networks and reality television, we can say that he was a true visionary and precursor of his times.

15 Minutes is significantly an example, where the two criminals exploit an already existing system, where serial killers are loved by the crowds as if they were movie stars.

That’s, in short, what makes this kind of story one of my favorites.

These movies are great entertainment with attention to their cinematic genre, able to make people think and think about our world.

Outrage Coda is the story of a criminal who escaped from Japan years earlier.

Now living in Korea, he manages some prostitutes business in a pleasure house.

One day a Yakuza boss refuses to pay for the service, in addition to beating up some of his girls.

The man must straightaway arbitrate the threatening the client, reaching an agreement to compensate for the aggression.

But when he sends one of his boys to collect the money, he ends up killed in an ambush.

Therefore he decides to return to Japan and take revenge.

His arrival will coincide with a critical moment between the two great Yakuza families, on the verge of starting a war.

Trying to deceive the gangs, the man will fight on each side, playing with the two criminal clans both committed to destroying their opponents once for all.

Outrage Coda is an impressive gangster movie, making an ironic and cruel portrait of the Japanese criminal culture.

Indeed, the Yakuza run their empire precisely like an ordinary corporation.

Smartly dressed in suits during their meetings, then exiting their offices and slaughtering each other mercilessly.

It is the last chapter of the trilogy after Outrage and Outrage Beyond, three different Yakuza families’ movies with the same creepiest actor, Takeshi Kitano.

The actor is also the director, building an entirely believable world of crime and death in a detached and straightforward style.

The filmmaking principles of Takeshi Kitano
by Eyes On Cinema

His character is the perfect emblem of Yakuza thought: violent and bloodthirsty criminals who, however, strictly following their moral code.

The war then takes place also within the two gangs.

The older clans’ older members struggle to maintain power against the younger and more aggressive pretenders to the throne.

Their struggle then becomes a clash between the leaders’ wisdom experience and the desire for conquest and domination of their criminal ranks newcomers.

For instance, the young and aggressive Yakuza is Pierre Taki‘s character, creating the initial problem from which chaos will arise.

The little boss doesn’t realize who he’s dealing with when he insults Takeshi Kitano and then kills one of his men by refusing to pay.

Henceforth, for everyone is too late to turn back.

The young Yakuza will try, without results, to remedy the offense by offering money and bowing in forgiveness.

His associates will try to exploit the situation to their advantage, further worsening the war and leaving him alone.

Oriental cinema unfortunately does not exist in the West

Takeshi Kitano confirms all his immense talent without excessive directing virtuosity or too complicated plot twist.

His story flows smoothly and naturally, based on the uncontrollable greed of these criminals fighting for power.

Despite this, his movies do not exalt violence or wickedness. On the contrary, he turns them into an ironic and funny caricature.

Outrage Coda has been a great success in oriental theaters, unfortunately mostly ignored by the western market.

Although the director’s name has many fans, his movies sadly don’t reach the American and European market like other Japanese, Chinese or Korean skilled authors.

If you’re interested in Asian cinema, find out more in these posts:

Movies with the creepiest actor
Table of contents