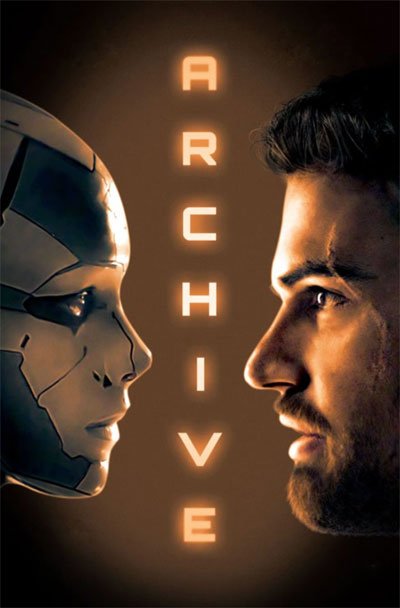 Archive begins years later two lovers had a car accident. The man, survived, lives isolated in the chinese mountains working on a new A.I. that is up to the android he built.

A machine designed to host the mind of his wife, who died years ago.

In fact, a new kind of server called Archive preserves the memory and personality of those who can afford it.

The machines are built with a direct line, allowing you to communicate with old loved ones.

An advanced but still fragile technology, with an expiration date beyond which they cannot resist.

Creatures still capable of feeling and often guided by the strongest human emotions such as envy, hate, love, and sexuality.

Then his research will become a fight against time before his wife’s Archive degrades beyond repair.

Archive is a great mix of classic sci-fi cyberpunk movie themes, with artificial humans fighting for their survival.

Theo James works well as a protagonist and almost practically lonely in the first half of the story.

He will join the beautiful and talented Stacy Martin, a perfect android with human feelings and independence, in the second half.

Mention then for two small roles for the always excellent Toby Jones as a cynical bureaucrat and the fabulous Rhona Mitra as a ruthless businesswoman.

This little sci-fi romance movie was written and directed by Gavin Rothery.

The characters are few and well described for a small but efficient cyberpunk story.

In addition, the beautiful natural location surrounding the laboratory offers an excellent contrast of style with the bare and highly hi-tech interiors.

The romance balance well with the intriguing technological plot and the constant threat of industrial espionage struggle between corporations.

In conclusion, Archive it’s a movie that satisfactorily satisfies more types of people. Lovers of the purest themes of evolution and computer science will indeed find bread for their teeth.

In the same way, who is looking for a movie with a beautiful story told with simplicity regardless of the movie genre.

In short, it is a movie that I recommend to everyone, without shouting is a masterpiece, but in the certainty of no one will be disappointed.